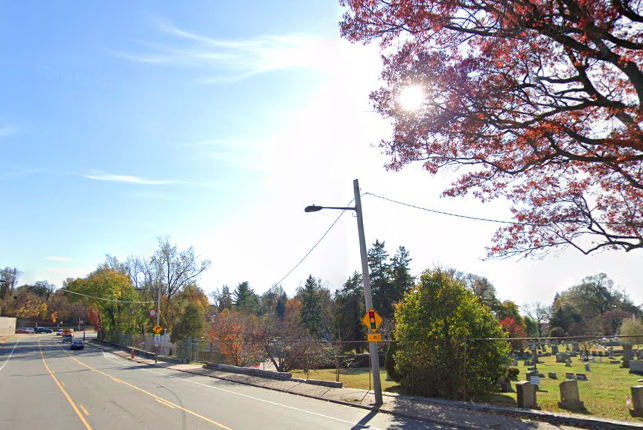 William Lindsay, 32, was riding his bike when he was struck by a vehicle in the 3800 block of Ridge Avenue in North Philadelphia. Investigators are searching for the driver in the hit-and-run crash on July 12, 2020.

Philadelphia police are searching for the driver of a vehicle that struck and killed a 32-year-old cyclist on Ridge Avenue in North Philadelphia on Sunday night.

The incident occurred around 8:35 p.m. on the 3800 block of Ridge Avenue, police said at a press conference Monday morning. The stretch of road borders Laurel Hill Cemetery.

The victim, William Lindsay, of Havertown, Delaware County, was found unconscious on the roadway suffering from a severe head injury. He was transported to Temple University Hospital in critical condition and was pronounced dead shortly after 11 p.m.

The vehicle has since been identified as a white Chevy Camaro with red racing stripes on the hood and trunk, tinted windows and a moon roof. The model of the car is between 2010-2015.

In surveillance footage released by police, Lindsay is seen traveling down Ridge Avenue when the driver of the Camaro approaches from behind, traveling in the same directions. The collision takes place out of view.

Investigators said there were no witnesses to the crash.

Glass found in Lindsay's hair and clothing led investigators to believe the Camaro sustained damage to its windshield.

The Philadelphia Fraternal Order of Police Lodge 5 is offering a $5,000 reward for information leading to an arrest. Police were able to isolate several colored images of the vehicle that may assist in identifying the owner.

The incident is Philadelphia's third fatal car crash involving a cyclist in the last month. Nadir Naffis Holloman, 18, died on Kelly Drive last week and 17-year-old Sam Ozer was killed in a crash in Roxborough on June 21.

Anyone with information concerning the crash on Ridge Avenue is asked to contact the Philadelphia police tip line at (215) 686-8477.