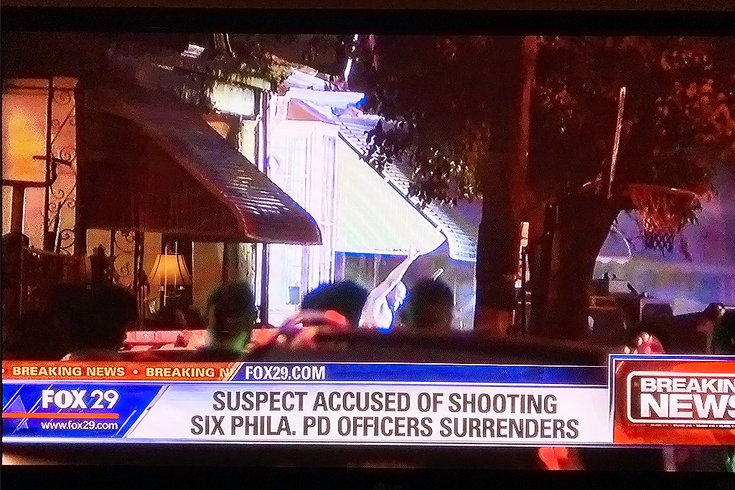 His hands in the air, a gunman surrenders early Thursday morning in Nicetown-Tioga after shooting and wounding six Philadelphia police officers during a seven-hour standoff.

A gunman who had holed up in a North Philadelphia home for more than 7 hours surrendered to police just after midnight Thursday.

The bare-chested suspect, identified in multiple media reports as Maurice Hill, 36, came out of the house with his hands up and was taken into custody by police on the scene.

The surrender came hours after two police officers trapped inside the home with the armed suspect were safely removed by a SWAT team.

Earlier in the standoff, which began about 4:30 p.m., six other officers were shot and wounded at the scene.The gunman, a convicted felon with six prior arrests, was armed with an AK-47-style weapon, authorities said.

Update: 2 PPD Officers who were in house with shooter have been safely evacuated by PPD SWAT. Suspect is still armed and inside house. Continue to avoid the area.

The incident began when a narcotics strike force attempted to serve a warrant at the home in the 3700 block of North 15th Street, near the intersection of Erie Avenue, in Nicetown-Tioga. A man reportedly armed with an assault rifle had opened fire on officers.

Dozens of police vehicles raced to the scene a block off Broad Street around 4:30 p.m.

Shots rang out for hours – sporadically for some periods – as SWAT and ATF officers surrounded the scene.

The man fired his weapon at police from inside the house, Philadelphia police Commissioner Richard Ross said. The wounded officers were taken to Temple University Hospital for treatment of non-life-threatening injuries.

One officer was grazed in the head and another in the leg. Another officer was apparently shot in the arm. All of the officers have since been released from the hospital, Ross said.

Additional officers were treated for non-gunshot injuries, including at least one who was injured responding to the scene, police officials said.

As the sun went down and heavy rain fell Wednesday night, police negotiators were working to communicate with the shooter, imploring him to surrender and avoid further injuries, Philadelphia police spokesman Sgt. Eric Gripp tweeted.

In the early hours of the standoff, live police scanner traffic continued to paint a chaotic picture of the events at the scene. Police could be heard discussing the conditions of surrounding neighbors, as well as reports that the gunman was livestreaming on Facebook.

Dozens of children in day care within the lockdown area sheltered in place for hours. Eventually, they were removed by police and their parents were able to pick them up at a safe location, according to Gripp.

Parents/Guardians of Children from Shake, Rattle & Roll Learning Center at 3625 N. Broad, and Precious Babies Daycare at 1433 Erie: You can retrieve your children at 3643 Germantown Ave on the Bus out front

Temple University's Health Sciences Center campus was temporarily on full lockdown and police were blocking off a portion of Broad Street. The university lifted the lockdown shortly after 7 p.m.

Lockdown for HSC campus has been lifted. All populations must avoid the incident scene and remain south of Venango St. Allied Security and Temple Police will assist.

"We're just doing as much as we can to resolve this peacefully at this point," Commissioner Richard Ross said at a press conference earlier Wednesday evening. "I've got officers in a very volatile situation. We are communicating to (the suspect) that we are trying to get him out safely."

Philadelphia Mayor Jim Kenney said he was angry that somebody could have so many weapons and firepower in their home.

He said he had talked with all six wounded officers before they were discharged from the hospital.

One officer, who suffered a graze wound to the head early on in the standoff, was being visited by his two little sons, said Kenney, noting that a matter of inches could have meant tragedy for the family.

"It's all about the officers and their families right now," Kenney said.

White House deputy press secretary Hogan Gidley said President Donald Trump, who's on vacation, has been briefed on the situation, according to CNN.