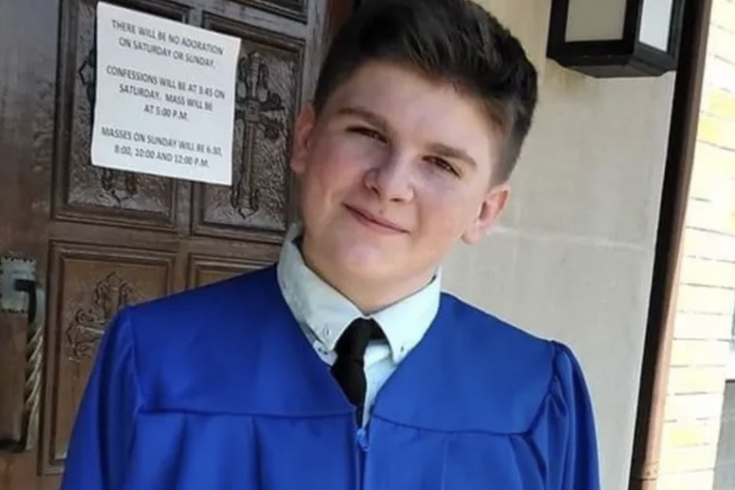 Sean Toomey, 15, was fatally shot in the Wissinoming section of Northeast Philadelphia on March 24. Two teenagers are now in police custody in connection with his death.

Two teenagers have been charged in connection with the death of 15-year-old Sean Toomey, who was fatally shot in March on a neighbor's front lawn in Northeast Philadelphia.

Toomey had stepped outside of his home in Wissinoming to get water from his dad's car around 9 p.m. on March 24. His father told investigators that he heard what sounded like firecrackers and soon realized that his son hadn't come back inside. When he went out to check on Toomey, he found the teen injured on his neighbor's front lawn.

Toomey was shot twice, including once in the head, and was taken to Jefferson Torresdale Hospital in critical condition, police said. He died the following afternoon.

Four 9mm fired cartridge casings were recovered at the scene, but no weapons were found and no arrests were made.

In April, police released photos of two suspects believed to have approached Toomey in the moments before he was shot. Both wore dark clothing and walked alongside one another. One of them had a hooded sweatshirt with the words "Rick and Morty" on it.

Several incidents were reported to police on the night Toomey was shot, which helped investigators later identify the suspects, prosecutors said.

One woman told authorities that three men attempted to rob her at the ATM at the Citizen's Bank at Frankford Avenue and Robbins Street, less than a mile from where Toomey was killed. The woman said one of the men had a gun, but she was able to run back to her car, where a friend was waiting for her, and call 911. Nothing was taken from the woman, police said.

Another neighbor on the 4000 block of Devereaux Street told authorities that two males had attempted to break in to her car after she had pulled into a parking space. Her 2-year-old son was in the car with her at the time.

The woman said she called her boyfriend for help and he came outside, but the suspects fled the scene. That's when they heard the gunshots that investigators say struck Toomey.

Five days after Toomey was killed, one of the suspects now charged in the shooting was arrested by Miami Beach Police for alleged battery and disturbing the peace. He was not a known suspect in Toomey's death in Philadelphia at the time.

Then on April 14th, Philadelphia Police responded to an incident at an Airbnb along the 1200 block of Newkirk Street in Brewerytown. Several guns were recovered at the scene and the two suspects charged in Toomey's death were taken into police custody at the time. One of them was charged with illegal possession of a gun, but neither of the teens had yet been connected to the March 24 shooting in Northeast Philadelphia.

Investigators got information allegedly linking the teens to Toomey's death earlier this month, when a third man was arrested by ATF agents for an alleged carjacking in the 1800 block of Pratt Street in Northeast Philadelphia. That man gave detectives information about the attempted robbery at Citizens Bank on the night Toomey was shot, in addition to details about the April Airbnb incident, prosecutors said.

The District Attorney's Office then approved charges against the two teens accused of killing Toomey and informed the victim's family. The third man, who provided information to police, is not believed to have been involved or at the scene when Toomey was shot.

“Sean Toomey was a child full of promise and hope, like all children," District Attorney Larry Krasner said. "The great potential he held was extinguished in a snap by strangers with firearms. Sean Toomey should be alive today and looking forward to the rest of his life. To those who knew and loved him: The loss of Sean's life is a grave injustice, and we are heartbroken and outraged by his death.”

It's still unclear why shots were fired at Toomey and investigators did not release a suspected motive.

A GoFundMe page created for the Toomey family has raised more than $27,000 in donations.