Not ready for retirement, Union’s Fred finds himself a unique job 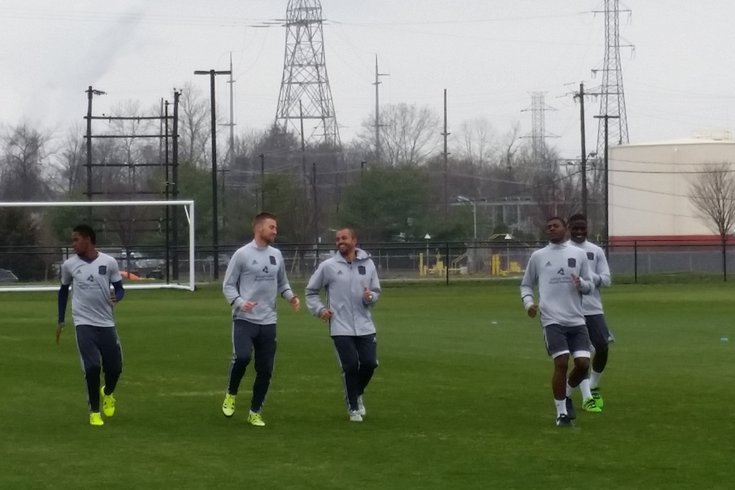 Union veteran Fred, center, has a new role as a player/coach for Bethlehem Steel FC.

Like most thirty-something footballers, Fred isn’t ready to retire.

The veteran Brazilian midfielder could call it a career right now and certainly feel a sense of accomplishment. Not many players can say they made more than 350 professional appearances on three different continents over the course of nearly two decades.

It’s 2016 now, and Fred is 36-years old. He was a frequent starter for the Union during the 2010 expansion season, left and eventually rejoined the club in an auxiliary role for the 2014 and 2015 campaigns.

Facing an uncertain future, Fred now looks to have found the perfect job as a player/coach for Bethlehem Steel. Think of it as the ultimate transitional role for a conflicted, but respected veteran.

PhillyVoice spoke with Fred about his new gig with the club.

PhillyVoice: What made you want to come back in this capacity?

Fred: It's a good question (laughs). I still think I can play a couple more years. Some teams, they didn't want me because of my age. I understand that I'm getting old but I feel like I can play. I called (Steel coach) Brendan Burke to ask if I could stay here and train with them, just to stay fit. He said, 'yea, come', and when I came we started to talk about whether I would like to be an assistant coach, and that they would teach me to be. So I said, 'why not?'. I'm almost ready to retire. I told him I still wanted to play, but I understand the situation, everything around me. I said ‘alright, let's talk about it’, and I decided to stay. At the end, they said, 'why don't you stay as an assistant coach and player'? That was even better, so that's why I took the opportunity. With Jeff (Cook), and Brendan, and Steve (Hogan), those were guys who helped to change my mind as a player and learn more about coaching.

PhillyVoice: Did you have a future interest in coaching?

Fred: Oh yeah, I was thinking about coaching little ones first, you know, to get experience and learn the tactical part of coaching and get my license, and stuff like that. I went to YSC Sports to talk to Iain (Munroe), and he said, ‘come here, I'll help you’, and we figured out everything, and it worked out.

PhillyVoice: It seems like you always had a lot of friends here. This was just a spot then that made sense?

Fred: Yea, it's good, I played here three years. I always tried to be professional and understand things around me (even though) I wasn't playing a lot of games in the last couple of years. I just want to help the young players and everyone around me. I have to be professional about it, and I think that's why everyone likes me, which is good to know.

PhillyVoice: Is it weird being 36 years old and sharing the field with a bunch of 19- and 20-year olds?

Fred: Sometimes I don't wanna think about it (laughs). But yea, sometimes I see these faces and they're 17 years old, but it's good, you know? I train with them and like I said, I still can play, because at that age they run more than they think (laughs). So when I have to run with them it helps me too. But I think some of these guys from Africa, they're not 17, I think they're older than me. Derrick Jones is one of them. (long pause for laughter). He's not that age. He must be older.

Philly Voice: Describe the dynamic of the job. You're on the field as a teammate of these guys, but you're also supposed to be coaching them at the same time. How do you strike a balance between the two, and does it get uncomfortable at times?

Fred: I don't think it's weird because they understand what my position is now, as a player/coach. I can feel the respect from them. They don't worry about it. They know I'm here to help them. It's good. They understand my role and what I'm doing here.

PhillyVoice: Did you have other plans or ideas? Were you thinking about retiring or maybe trying to play for another team?

PhillyVoice: That's where you would have done the academy?

Fred: Yea, because I have some friends there who would help me do it. But now I'm here, and I have to learn a lot more about coaching. It's difficult, the transition from a player to a coach. I just now understand more about the positions and the tactical part and that will help me in the future if I want to open my own academy. We'll see.

PhillyVoice: You're one of the few guys that were here in 2010. You practiced at a public park. Everything was brand new. Now you look up and see this training facility, you see a USL team, you see all of these improvements. Can you describe where this franchise is now, versus back then?

Fred: Yea. It's become professional, it's more... how can I say it.. there's more structure. It's not just a first-year team. Now we have to think about winning titles and winning games and making this grow even more. This is a real franchise. Like you said, we have a good facility and good fields. We have to take advantage of that and the players have to understand (how to be) professionals now. They have to put some pressure on themselves and go out and win games and win titles. That's what we need now. Now that we have everything else, we need to make this club even better.