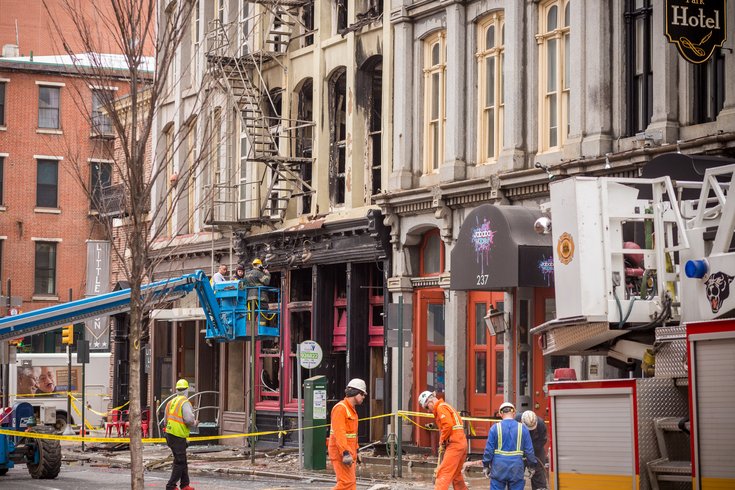 Philadelphia Gas Works employees dig up a portion of Chestnut Street near the location of a large fire that occurred on Sunday, Feb. 18, 2018.

Federal and local investigators have not yet determined the cause of a massive blaze that broke out two weeks ago on a vibrant Old City block, Philadelphia officials said Friday.

The U.S. Bureau of Alcohol, Tobacco, Firearms and Explosives continues to investigate the four-alarm fire with the Philadelphia Fire Marshal's Office, according to a press release from the city's Department of Licenses and Inspections.

The city plans to demolish the six-story apartment building at 239 Chestnut St. in which the fire originated on the morning of Feb. 18, but the city said Friday that the demolition would be delayed another two weeks as crews work to first stabilize a neighboring structure.

The Department of Licenses and Inspections deemed the building "imminently dangerous" last Friday and had said it planned to start the demolition process this week.

The city halted work on Friday as a powerful coastal storm brought rain, snow and high wind to the area. Work is expected to resume on Saturday, officials said.

The demolition was initially put on hold to allow for the federal Bureau of Alcohol, Firearms, Tobacco and Explosives to investigate the building in its search for a cause.

The blaze, which began on the sixth floor, damaged neighboring buildings and displaced about 160 residents and hotel guests along the 200 block of Chestnut Street. There were no injuries or fatalities, but 13 animals – nine cats and four birds – died in the fire. Two firefighters suffered minor injuries.

Several businesses have reopened along the block, but others, including The Little Lion Restaurant at the corner of Third and Chestnut streets, are still closed. Businesses affected by the blaze can contact the city Department of Commerce at business@phila.gov or call Business Development Manager Carol Brooks at (215) 683-2127 for more information.

Most of the displaced residents at 24-30 Bank St. are now able to return to their homes, officials said.

But a number of roads in the area remain closed to traffic, and the city on Friday still described the site of the fire as an "emergency scene where life safety is our primary concern."

"Once the scene is considered safe, the city will look to create safe passageways for pedestrian and vehicular travel,” Emergency Management Director Dan Bradley said in a statement.

The city may close other roads temporarily, officials said.