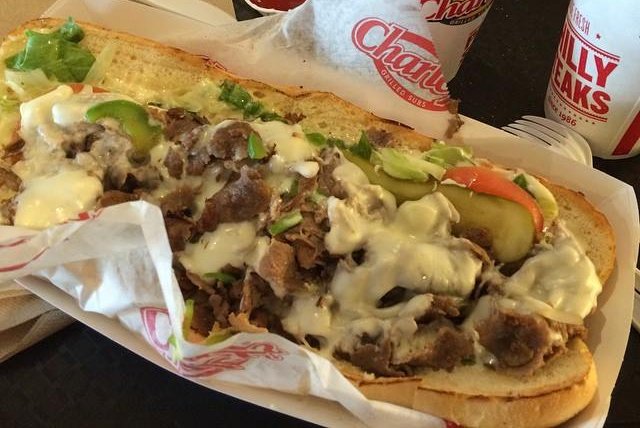 A cheesesteak from Charleys Philly Steaks, which claims to have the world's best cheesesteak.

Thanks to daily google alerts for "Philly," I recently happened upon an article from a Massachusetts newspaper about a couple of new additions to a local mall.

The big gets? A Starbucks and a fast food chain claiming to serve the "World’s Number One Philly Cheesesteak."

According to the article, shoppers at the Westgate Mall in Brockton will soon be able to eat at Charleys Philly Steaks, which makes a questionable (at best) assertion about the quality of its sandwiches. Per the Enterprise News:

Charleys Philly Steaks bills itself as the home of the "World’s Number One Philly Cheesesteak." But the company – now boasting 550 locations in 45 states and 20 countries – is based in Columbus, Ohio.

The restaurant was founded in 1986 by Ohio State University student Charley Shin, after he encountered the Philly cheesesteak during a trip to New York City that veered off into the City of Brotherly Love. Shin dropped the Cheez Whiz that is common to the sandwich in Philadelphia, opting instead for white American cheese for the company's signature Philly steak.

Now, there's nothing wrong with getting American instead of Whiz – that's actually how I prefer my cheesesteak. Also, with the lettuce, tomato and peppers, Charleys' concoction is more of a cheesesteak hoagie, which some people like, supposedly.

But an Ohioan claiming his franchises have the best version of Philly's signature delicacy because of a trip he took to New York? That's like Jimmy John's claiming the world's best clam chowder.

Maybe the writer made a mistake, misinterpreting "fast and acceptable alternative to a cheesesteak."

In 1986, Charleys redefined the Philly Cheese Steak. Today, more than 550 locations in 47 states and 20 countries serve up the #1 Cheese Steak in the World.

Ignoring the fact that the description incorrectly has "Cheese Steak" as two separate words (and that “Charleys” isn’t the possessive “Charley’s”), this is a pretty bold assertion, almost as insulting as Pittsburgh cheating its way to victory in a best-cheesesteak poll.

In all fairness, Charleys steaks could taste perfectly fine — I've never had one. But I feel pretty safe betting that they're not the world's best.

The closest Charleys location (they really are everywhere, by the way) to Philly is in Bensalem, a trip I won't be making to confirm the notion that Charleys probably doesn't have the world's best cheesesteak, mainly because I'm not sure I could stomach watching someone scarf down one of the chicken teriyaki "cheesesteaks" on their menu.