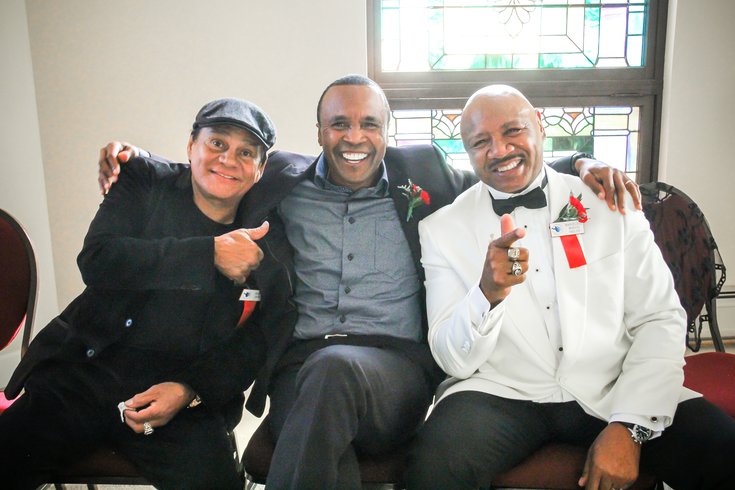 Roberto Duran, Sugar Ray Leonard and Marvin Hagler — together with Thomas Hearns — formed “The Fabulous Four” that dominated boxing throughout the 1980s. Now close friends, they posed together during the Boxing Hall of Fame Weekend in Canastota, N.Y., in June.

All of the sharp, acute points are gone, replaced by a sort of paunchy, jovial softness. The square jaw, once as rigid as a right angle ruler, is lax and round, like the belly and the edges of those demonic, deep-set, coal-colored eyes. The great mane filled with the bouncing thick, black licorice strands now carries touches of gray.

The anger, too, has subsided, morphed through time into a warm, avuncular presence.

Roberto Duran’s favorite pastime these days is hugging and kissing everyone he sees. It makes you scratch your head and wonder if this is the same man, as the legend goes, who knocked out a horse with one punch, and whose death glare alone used to make fighters wet their trunks before getting into the ring with him in the 1970s and ’80s?

The legendary Duran, 65, is enjoying a resurrection with the movie “Hands of Stone,” which will be released nationally on Friday, telling the story of a kid who grew up in the dirt streets of Panama, where he learned to fight and unleash a red-hot temper.

It’s there where the foundation took hold of the first fighter to ever beat Sugar Ray Leonard and where the icon began.

The focus of the movie falls on the first two times Duran met Leonard (they fought a third, less memorable fight in 1989 that Leonard dominated, though Duran still felt he won). It covers the infamous “No Mas fight” and Duran’s improbable journey back from being viewed as a coward by his own people and throughout the world to regaining his legacy as an all-time great (Ring Magazine ranked Duran as the greatest lightweight of all-time in 2001).

“It was a little hard going back to some of those times, reliving the fight against Ray [the ‘No Mas fight’ in New Orleans],” Duran told PhillyVoice. “That wasn’t me. I’m not a coward. What still hurts today is what I put my family through. My children were young and they had to go through hell. They were told that their father was a coward, an [embarrassment] to Panama by the same people that were yelling my name in the streets just five months earlier when I beat Ray in Montreal. Every once in a while, people still bring that up. To me, it’s over.

“Today, Ray Leonard is my friend. I love the man. I wouldn’t be where I am without him. He’s a courageous, brave man who I respect. He’s the best fighter I ever faced. You look back in time, and I can still say I was the first fighter to ever beat Sugar Ray Leonard.”

“Duran was one of the reasons why I got into boxing,” Hall of Famer Mike Tyson told PhillyVoice. “He was a killer; he was nasty, nasty man. I loved it. Duran was one of my early heroes."

Duran had such an impact on boxing that it even tapped a heavyset, wayward kid in the Brownsville section of Brooklyn, New York.

“Duran was one of the reasons why I got into boxing,” Hall of Famer Mike Tyson told PhillyVoice. “He was a killer; he was nasty, nasty man. I loved it. Duran was one of my early heroes and to see him just quit like that [during Duran-Leonard II] shocked me. I couldn’t believe it. Duran feared no one, and he just quit. I know he said he had cramps, but Sugar Ray was dazzling.

“[Leonard] was fast, he boxed and fought his fight the second time. Fans thought he was this pretty boy, but Ray could fight. He stood there and fought Duran in their first fight. He came back to beat [Tommy] Hearns in a fight he was losing. Ray was as much of a fighter as Duran. He showed he could stand there and fight you. He wasn’t all pretty boy. Ray could fight. Ray was tough. I think they brought out the best in each other.”

Today, Duran and Leonard openly confess their love for each other. It makes them both laugh because they both also admit that they detested one another decades ago. Sometimes with age comes wisdom. In the case of these two singular rivals, the lesson of a thousand punches seeped through.

Leonard, who is played in “Hands of Stone” by Usher, thought he knew everything about Duran. He admits the movie enlightened him.

“I didn’t know that much about Roberto’s upbringing, and the movie not only showed our fights but about life and about survival, especially with minority boxers,” Leonard told PhillyVoice. “It showed what we go through to reach that success that Roberto and I had. That’s what touched me about the movie. It touched my heart because I thought I had it bad living as I did as a young kid coming up in Palmer Park, Maryland. Roberto had it even worse, and that was emotional to me.

“I saw how he got that fire within him. Duran was one of the most intimidating fighters in the history of the sport, prior to Mike Tyson. I saw a person in Duran that showed itself in the ring. As tough as he was in the ring, he was also a crazy son of a bitch out of it; he had this vengeance. He wanted to hurt his opponent. That came out in the movie. When I first faced him in June 1980, in Montreal, I was never hit that hard before. I found out about manos de piedra, there’s no question about that. I felt it. I felt there was someone else in the ring behind me, hitting with a bag of rocks. He was relentless. But the first time, I fought his fight.”

Leonard and Duran were in New York recently for the premiere of “Hands of Stone.” Ray sat a row in front of Roberto and after the movie ended, turned and told his friend, “great movie.”

But there was one sticking point to the great Leonard that will never go away. Actually, it’s something the two hold closely – after all of these years. There still lingers one fragment of contention.

"We’re forever linked with each other. Whenever I see him, we say we love each other. It’s special every time I see him. It’s the same between myself and Tommy, and myself and Marvin [Hagler]. We all made each other great.”
– Sugar Ray Leonard

“To this day, I haven’t still gotten the satisfaction from beating him in the second fight; even to this day, he says he had cramps in that fight,” Leonard said, laughing. “I’m at a point in my life, in my skin and my heart, I’m okay with that still being a question mark. I know what happened in New Orleans. He knows what happened in New Orleans. That’s all that matters. He couldn’t hit me; I frustrated him. It’s like a bully who comes to squash you again and you hit him in the nuts, you hit him on the chin, you hit on the nose. A bully doesn’t know what to think; he doesn’t like retaliation. He’s going to get up and move away and get out of there.

“I will say this, I love Roberto and what happened in the No Mas fight, whether he actually said it or not, chopped away at his legacy. That fight was a tough thing to swallow and accept. That was unfair. It’s something he has to eventually come to grips with.”

Leonard also revealed something else: When he went to Panama for the ESPN 30-for-30 on the No Mas fight in 2013, it was Duran that made sure he personally picked him up every night to go out to dinner.

“The thing was so surreal,” Leonard recalled. “We’re driving through Panama and people are going by beeping their horns and waving at us. I’m sitting there with Roberto Duran in his car, and I’m thinking to myself, ‘This wouldn’t have happened 20, 30 years ago.’ We were rivals, hated rivals. There is a camaraderie today.

“Duran and I will always have respect toward one another. He pushed me to the limit the first time we met. The second time we met, I was happy, but not totally satisfied. The third fight, we were at a stage when we were uncertain what we were going to do with the rest of our lives. Now, we’re forever linked with each other. Whenever I see him, we say we love each other. It’s special every time I see him. It’s the same between myself and Tommy, and myself and Marvin [Hagler]. We all made each other great.”