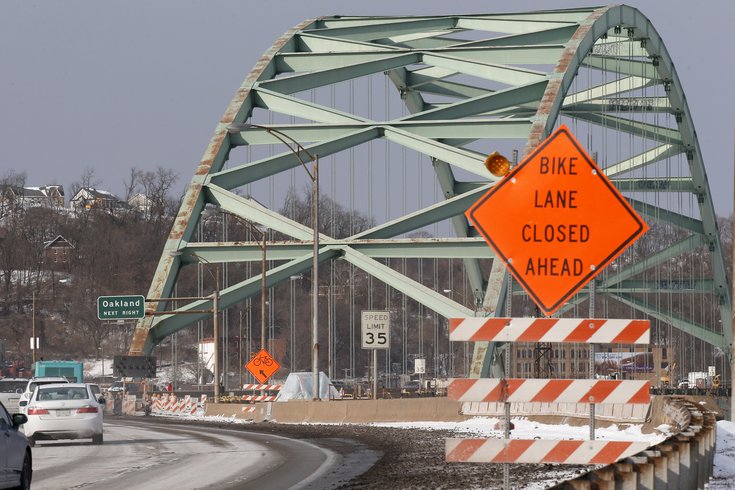 This Feb. 19, 2015 file photo shows a lane blocked by construction equipment as work continues on the Birmingham Bridge that spans the Monongahela River in Pittsburgh.

According to figures from the Federal Highway Administration, Pennsylvania and New Jersey are among the top 10 states with the worst bridges in the United States.

Pennsylvania ranks fourth, with more than 40 percent of its bridges being deficient. More than 35 percent of New Jersey bridges are deficient, the sixth-highest among the 50 states.

Twenty-four percent of bridges are rated as deficient nationally, according to the latest statistics that run through Dec. 31, 2014. Eight of the 10 states with the most deficient bridges are located in the Northeast, including New York.

New Jersey's list of deficient bridges includes the heavily traveled Route 3 east bridge between Secaucus and Rutherford, where cracks in a beam forced the state Department of Transportation to temporarily close a lane in January. A 92-year-old bridge across the Assunpink Creek between Trenton and Hamilton in Mercer County has been closed for a year and a half.

View a map of all of Pennsylvania's structurally deficient bridges, part of a Keystone Crossroads series on the state's bridges.

The figures demonstrate the need for federal and state officials to find the money to fix the deficient bridges.

A possible solution for New Jersey could be an increase in the state's gasoline tax, NJ.com suggests. Currently 14.5 cents a gallon, New Jersey's tax is the second-lowest in the U.S., behind only Alaska, according to the American Petroleum Institute. Pennsylvania has a higher gas levy per gallon at 50.5 cents.