Pa. police officers pay tab for couple who refused to sit near them 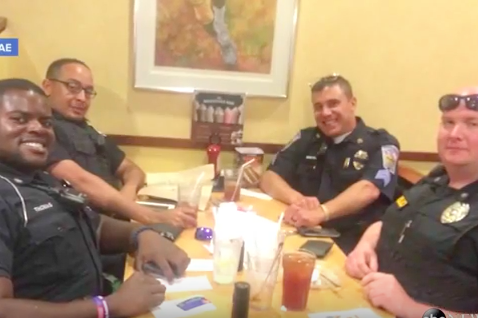 A group of Pennsylvania police officers who were shunned by a couple at a local restaurant in Homestead decided to fight fire not in kind, but with an act of kindness.

Over the weekend, the four officers went out for a bite at Eat N' Park when a couple seated next to them by the server said they wanted another table, according to The Blaze.

"Nah, I don't want to sit here," the man told server Jesse Meyers. When one of the officers told him there was nothing to worry about, the man repeated himself and walked away.

Officer Chuck Thomas said he decided to pay the tab to make a gesture amid heightened national tensions over recent police shootings of minorities and the deadly sniper attack in Dallas.

“It just dawned on me, I should do this real quick just to show this guy look, I don’t know if you had bad experience with the police in the past — you may have you may have not — but I just want you to know I never had an experience with you and I’m not here to do anything to you," Thomas said. "And neither will my partners."

Just for good measure, the officers left a note on the check.

“Sir, your check was paid for by the police officers that you didn’t want to sit next to. Thank you for your support.”