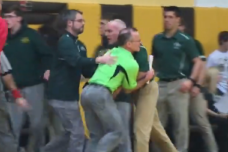 A pair of head coaches for two Harrisburg-area high school wrestling teams have been disciplined by their respective schools after engaging in a physical altercation Monday night during the preliminary round of the PIAA Team Wrestling Championship.

The incident occurred as archrivals Cumberland Valley and Central Dauphin faced off at Milton Hershey's Spartan Center in a bid to advance in the District 3 Class 3A competition.

According to USA Today, tensions flared toward the end of a neck-and-neck contest when each team was hit with an injury disqualification. The two calls involved an eye getting poked and a body slam, moves that are both barred by rule, yet each team claimed that it could have continued the fights.

The match would be settled by a tiebreaker, 29-28, in favor of Cumberland Valley. After the incident, Central Dauphin athletic director Chris Hunter confirmed that coach Sweigard was suspended for the team's match with Upper Darby. Both schools later released a joint statement addressing the fight:

"The actions of the Cumberland Valley and Central Dauphin head wrestling coaches at Saturday's match do not reflect the high standards of good sportsmanship and leadership that we expect our coaches to model for our athletes."

"While these two programs have a history of extraordinary accomplishments, this public display was unacceptable. It is important for both communities to know that success does not relieve a coach of the responsibility to exercise restraint and good judgment, especially in those moments when emotions might tempt a coach to behave otherwise.

"The administrations of both the Cumberland Valley and Central Dauphin School Districts do commend our student-athletes for their positive behavior on that difficult day."