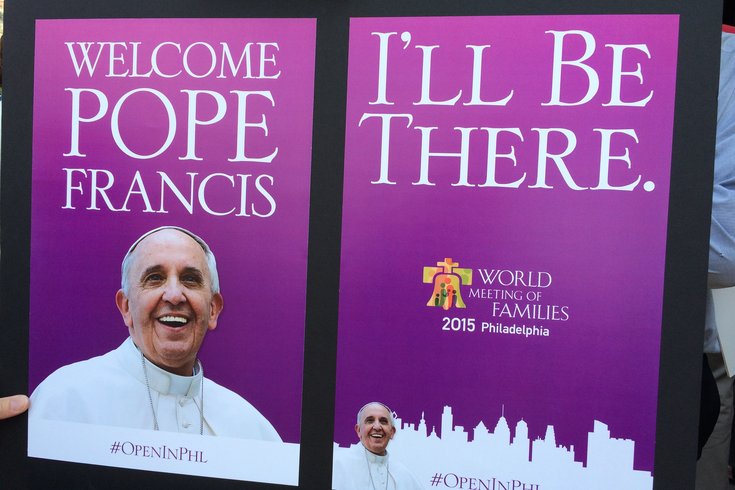 World Meeting of Families organizers unveiled Wednesday the design to window clings that are part of a broader marketing campaign aimed at increasing excitement for the papal visit.

Organizers for the World Meeting of Families announced Wednesday a grassroots marketing campaign aimed at encouraging business and residential participation during the papal events in late September.

Standing outside Jack's Firehouse in Fairmount, WMOF Executive Director Donna Crilley Farrell unveiled window signage and buttons depicting Pope Francis alongside the marketing slogan #OpenInPHL. The signage and buttons will be distributed to businesses throughout Center City as part of the "I'll Be There" campaign. Businesses that will be open during the papal visit are being asked to use the window signs.

The marketing campaign comes amidst residential grumbling regarding the massive street closures, traffic restrictions and public transit alterations that event organizers have deemed necessary. But Mayor Michael Nutter said the campaign is not a response to those complaints, saying a marketing effort has been planned for months.

"We have had a game plan for a long, long period of time," Nutter said. "It's really about the timing of how you release the information. If we had talked about these kinds of things four months ago — and not had a traffic plan — you would have looked at us like we had three heads or something."

Regardless of the marketing campaign's origins, event organizers clearly have heard the complaints.

Philadelphia Archbishop Chaput addressed some of the rumblings in a statement Wednesday afternoon, saying that Philadelphia could deal with a "little inconvenience" regarding Francis' visit and drawing biblical references in the process.

"Somehow, Mary and Joseph managed to make their way to Bethlehem and have a baby in a stable. Somehow, they managed to find the adolescent Jesus in the Temple," Chaput wrote. "And somehow, Jesus managed to preach the Gospel all over Judea despite robbers, brigands and demons — and without downtown parking or even a SEPTA pass."

Chaput's metaphors come as the event's organizers are attempting to in some ways reframe the perception of the papal visit.

WMOF organizers rebranded the so-called 'traffic box' as the "Francis Festival Grounds," Farrell said. That area, in which most outside vehicles may not enter during the papal visit, engulfs Center City and some neighboring communities, including Fairmount.

Nutter praised Jack's Firehouse as a business that worked alongside his office to ensure it remains open during the papal visit. Nutter said Reading Terminal Market also will remain open, saying the market worked out its delivery issues with his office.

"Within the week, we'll actually be able to talk in more detail about both issues of deliveries to virtually all of the businesses in the Francis Festival Grounds as well as commercial trash pickup," Nutter said. "We think that we've pretty much solved most of the challenges that any of the businesses were concerned about."

Farrell also took aim at critics who say the best glimpses of Pope Francis will be on television, not amidst the masses expected on the Benjamin Franklin Parkway.

"Do you know anyone who fondly recalls the visit of Saint John Paull II in terms of watching it at home on their TV?" Farrell said. "Now is the time for all of us to declare 'I'll be there' because this is not a moment to be missed."

Farrell announced 40 Jumbotrons will be strategically placed across Center City, enabling pilgrims to watch various festivities without needing to enter the secure perimeters surrounding the Parkway and Independence Mall, where Pope Francis will deliver a speech on immigration.

The exact positioning of those screens will be announced at a later date, but organizers said placement will include the Parkway, City Hall and North and South Broad Street.

The screens will broadcast Pope Francis's arrival at Atlantic Aviation on Saturday, Sept. 26 and the Cathedral mass at the Basilica of Saints Peter and Paul. The screens also will display his public events — his speech at Independence Hall and the Festival of Families, both on Saturday, and the papal mass on the Parkway on Sunday, Sept. 27.

In effort to raise excitement, Nutter will join event organizers Monday as they distribute hundreds of marketing kits to businesses within Center City. The kits will include the window signage and buttons unveiled by Farrell.

Farrell also announced that pilgrims entering the 'traffic box' will receive holy medals or prayer cards to serve as keepsakes.

The WMOF also encourages pilgrims to document their participation using #PopeInPhilly on Twitter or Instagram. Qualifying posts that also include #RomeContest will be entered to win a family vacation to Rome.

The WMOF will launch a transportation website on Monday, Farrell said. That website will detail the varied transportation options available and the driving restrictions.