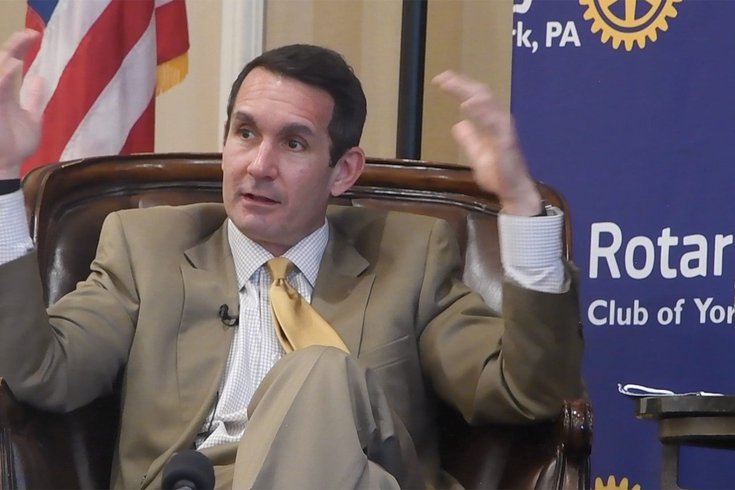 Eugene DePasquale, Pennsylvania's former auditor general, stepped in to provide aid to a woman who fell to the ground during a fight at the Peach Bowl in Atlanta, where the University of Pittsburgh took on Michigan State last Thursday. Dec. 30.

Former Pennsylvania auditor general Eugene DePasquale took his son to Atlanta last Thursday to see the University of Pittsburgh take on Michigan State in the Peach Bowl at Mercedez-Benz Stadium.

A Pittsburgh native and Pitt alum, DePasquale got a lot more than he bargained for during his father-son trip.

At halftime, DePasquale went to a concession stand to buy peanuts when he overheard a fight escalating between a Pitt fan and a Michigan State fan, he told the York Daily Record.

A video of the fight, which has been viewed more than 8.8 million times on Twitter, shows the two men throwing punches at one another as others in the concourse attempted to keep them separated. A woman who stood between them was knocked to the ground. (Note: This video contains explicit language and violence).

at the pittsburgh vs michigan state game😂 pic.twitter.com/5IW7RPyMcc

“I saw her get hit,” DePasquale said. “It wasn’t the blow, it was the way her head hit the ground. I believe she was (hurt), but not seriously.”

As the two fans continued to fight, DePasquale and another person attending the game rushed to the woman's aid. The two men grappling fell to the ground right next to the women and DePasquale shielded her body.

“I got kneed and elbowed when I was lying on her,” DePasquale said. “I’m just thankful it didn’t get worse. A young guy, maybe 20 or 21, came up and asked what he could do. I told him to find a medic.”

The former auditor general and state representative added that he was shocked to look up and see that bystanders were filming the incident rather than quickly getting the attention of security personnel, who took several minutes to arrive at the scene.

It's unclear whether the two men who fought were arrested or removed from the stadium.

DePasquale returned to his seat and explained to his son what had happened. He told his son none of the concession stands had any peanuts.

It wasn't until the video went viral that friends of his noticed him and reached out about the incident. DePasquale was stunned by the amount of views the video received.

“I can’t get eight million views on a healthcare plan," DePasquale said.

The Panthers, who were without star opt-out quarterback Kenny Pickett, lost to the Spartans 31-21.

DePasquale lost his Democratic run for Pennsylvania's 10th Congressional district in 2020 to incumbent Scott Perry, but plans to run for the seat again in 2022.