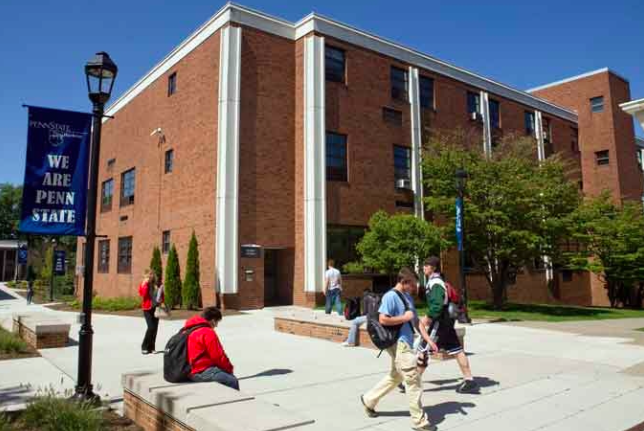 Officials at Penn State University say that while a series of posters that showed up on campus bulletin boards this past week are "deeply offensive" in their call for U.S. citizens to report "illegal aliens" to authorities, they will not be removed out of deference to the First Amendment.

The unsigned posters, first reported by The Daily Collegian, appeared on campus last Monday and implored citizens to take action against undocumented immigrants.

"It is your civic duty to report any and all illegal aliens," the posters read. "They have broken the law."

A spokeswoman for the Penn State's Paul Robeson Cultural Center said in statement that the posters "appear to be designed to provoke anger, fear and hate," but the university does not plan to remove them from public boards. They will only be taken down from boards exclusively intended for university organizations, or if they are blocking other notices.

"As an institution of higher education, Penn State fully supports the right of free speech and encourages its expression in a thoughtful and respectful way, even when we strongly disagree with the opinions expressed," the statement continued. "Penn State is enriched by students and scholars from around the world and we will continue our work on providing a climate of inclusion for all, regardless of country of origin."

U.S. Immigration and Customs Enforcement (ICE) officials told the Pittsburgh Post-Gazette that the posters are "bogus" and that the agency will not be soliciting information on undocumented students.

The posters appeared as a legal battle takes shape over President Donald Trump's controversial executive order to halt the U.S. refugee program and impose temporary bans on immigration from seven predominantly Muslim countries. That order is under review by the 9th U.S. Circuit Court of Appeals, which last week refused to reinstate the order as its national security merits undergo judicial scrutiny.

Trump, meanwhile, signaled that he may issue a second executive order to override what he has described as a "political" challenge. Hundreds of people have been detained in recent days as ICE appears to be reverting back to tougher policies pre-dating the Obama administration. Trump and White House officials took credit on Sunday for the raids in multiple states as immigrant communities expressed growing panic and fear about their status in the country.

In the days after Trump's initial executive order, protesters descended on airports around the United States to oppose the travel restrictions and detainment of passengers with valid documentation.

Other educational institutions in the region, including the University of Pennsylvania and West Chester University, have declared themselves "sanctuary campuses" in recent months and pledged to protect students of all nationalities.