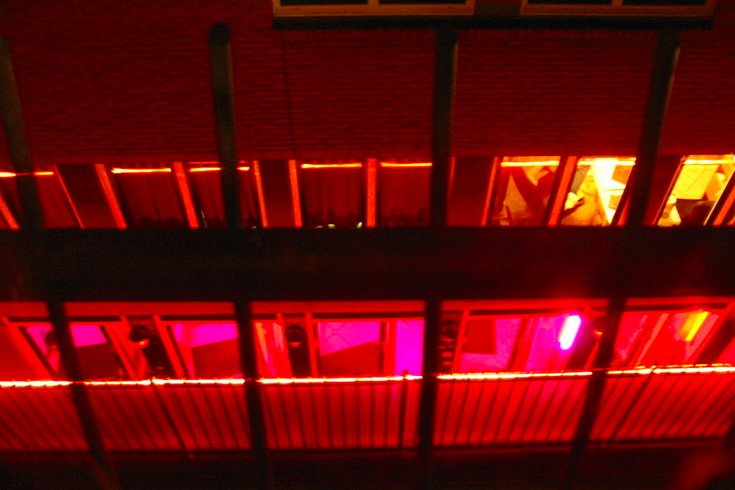 An undergraduate student at the University of Pennsylvania is advocating for the legalization of prostitution, making her case this week in an op-ed published by the school's student-run newspaper.

For her story in the Daily Pennsylvanian, Sophomore Isabella Simonetti spoke on the record with two sex workers and a massage parlor owner who shared their experiences with prostitution in the Philadelphia area. All three believe that a change in policy would empower women, safely meet an economic demand and improve public health.

"The idea for this story came after seeing that a building with a strip club nearby Penn might be sold," said Simonetti, referring to Club Atlantis at 38th and Chestnut Streets. "I wanted to see if I could talk to people about prostitution in Philadelphia."

Despite a long and complicated history of legal prostitution in the United States, certified brothels in Nevada are now the only places in the country where this sex trade can be legally practiced. Federal sex trafficking legislation passed in March also has made internet solicitation much more difficult, shutting down many "personals" sections on websites such as Craigslist and BackPages.com.

Simonetti and editor Harry Trustman worked together to reach out to escorts who advertise services discreetly at lesser-known websites. Few were willing to talk at all and those who did generally did not agree to go on the record. Trustman often had to handle interviews because the women wouldn't see or speak with Simonetti.

"I have always thought that prostitution should be legal, and speaking with numerous sex workers affirmed that," Simonetti said. "The descriptions they provided of the manner in which they are treated were deeply troubling. Writing the piece was actually quite difficult for me. It felt pertinent that I piece together these narratives in a way that does justice to voices that often go unheard."

Beyond the realm of research and public debate, little has been done in the U.S. to seriously evaluate what kind of societal conversation and legal pathway would lead to broadly adopted reform. Groups such as Amnesty International and even a United Nations commission have openly supported decriminalization of consensual sex work, but there is no imminent legislation intended to change the status quo.

Simonetti spoke with a 34-year-old, divorced mother of two, who began working as a prostitute in Philadelphia after moving here earlier this year. Identified only as Roxie, she's been able to support her family with an extra $2,000 per month, supplementing her income from a medical industry job.

Jara Krys, a Wharton student and well-known trans sex worker, also provided insight into how prostitution helped her complete her transition during a leave of absence from the university. She plans to open her own sex shop after graduation.

The two women described a lifestyle that has been both risky and highly rewarding. Unpredictable and demanding clients make their work dangerous and potentially confrontational, particularly when clients refuse to pay them for their services. In the absence of regulation, they don't have any recourse.

Without legal statutes in place to protect Roxie, there’s not much she can do. Customers frequently renege on their payment or offer drugs as compensation. Working in an illicit industry, Roxie can’t turn to the authorities to seek justice against her abusers. So, she gets tested for sexually transmitted diseases every three months, which she claims is about average for most girls in the industry, and gets on with her work.

“I think that if it was legal,” Roxie mused, “People would be a little safer.”

As might be expected in such a murky world, different studies have produced conflicting results.

In Rhode Island, prostitution was accidentally legalized between 2003-2009. Deleted language in a statute that had been revised to crack down on sex work ironically wound up permitting it, as long as transactions weren't conducted on the street. Similar policies have been suggested as a compromise to decriminalization in Pennsylvania and other states.

A subsequent study of that period in Rhode Island found that female gonorrhea cases dropped by a stunning 39 percent, while rape offenses decreased by about 30 percent, according to the National Bureau of Economic Research.

"This story is worth the backlash because it's important for people to know that this is going on under their noses, especially the stuff involving police." - Isabella Simonetti, sophomore at the University of Pennsylvania

The theory behind such changes, which were limited to Rhode Island at the time, is that legalized prostitution promotes safer sex practices and provides a legal avenue for violent offenders whose primary criminal motivation is sexual desire.

But another study in 2007 found different results in places where commercial sex is legal—Nevada, Germany, the Netherlands and Australia. Melissa Farley, a San Francisco psychologist staunchly opposed to prostitution, documented an increase in the number of rapes and assaults against sex workers in these locations.

Farley's findings helped defeat a San Francisco proposal that would have prevented the city government from using city funds to prosecute prostitutes and johns.

Philadelphia District Attorney Larry Krasner, whose progressive policies have garnered national attention, tweaked the city's stance on prostitution earlier this year. Assistant D.A.'s are now advised not to charge prostitution cases against sex workers who have as many as two prostitution convictions.

Simonetti said her conversations with area sex workers opened her eyes to the fraught relationship between law enforcement officers and prostitutes. She felt taking a controversial stance — and any criticism that comes with it — was warranted

"This story is worth the backlash because it's important for people to know that this is going on under their noses, especially the stuff involving police," said Simonetti, who hopes to talk with legislators, vice enforcement officials and sex work advocates for future stories.

Statistics provided to The Daily Pennsylvanian indicate that there were 651 arrests for soliciting prostitution between August 2017 and July 2018 in Philadelphia. Only 15 prostitution house owners and 32 brothel sex workers were arrested during the same span.

As Simonetti's sources explained, some of their greatest concerns stem from interactions with police officers, whose varying attitudes toward prostitution can influence individual behaviors and organizational responses.

"The police are wasting time and resources going after women that need their protection," Simonetti concludes in her piece. "Instead of focusing on people having consensual sex for pay, they need to crack down on the real issue: violent sex traffickers destroying the lives of women and children throughout the country, and rapists who abuse sex workers. Pa.: it’s time to legalize prostitution."