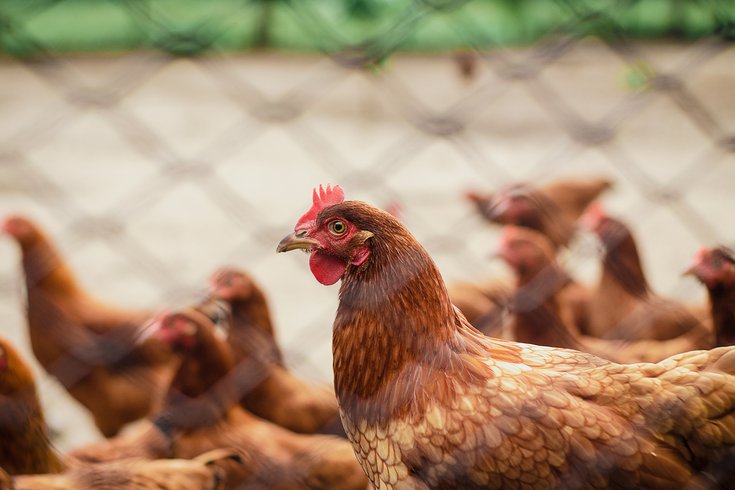 A Lycoming County woman shared photos on Facebook of a chicken head that she found in an order of wings she received from a local pizza shop. The small business has apologized and vowed to rectify whatever led chicken's head to wind up with the batch of wings.

Chicken wings are the fuel of many an American diet, an all-purpose and flavorful meal that can work equally well as an appetizer or a main course.

The problem with wings is that the sheer quantity we consume (close to a billion servings annually) sometimes exposes the worst of large-scale factory farming and the distribution network its products run through before reaching our plates.

Those who aren't vegan or vegetarian generally do their best to look the other way, but the risk of those horrors staring right back at you one day is always there.

Brittani Paulhamus, a resident of Williamsport in Lycoming County, was stunned last week when she ordered a bucket of chicken wings from local take-out spot Old School Pizza. The restaurant has pretty decent reviews that range between 3.5 to 4.5 stars on sites like Yelp and Google, but what Paulhamus found in her order probably won't be much help in that department.

In a Facebook post last Friday, Paulhamus shared photos of a whole chicken head that managed to find its way into the frier and all the way to her kitchen table.

Ordered wings from Old School Pizza with Hannah Wingrove and received a chicken head….. Was told to call back on Monday...

Paulhamus' post was shared more than 12,000 times and collected more than 4,000 comments, something she didn't expect. As you'd expect on a viral Facebook post, the comments covered a range of critical and cranky opinions.

Vegans bashed meat eaters for their complicity in these mishaps. A contingent of blasé, "nothing-to-see-here" types minimized Paulhamus' shock and basically said the chance of a chicken head comes with the territory of eating chicken — which is true, but not how anyone would talk about their own order of wings. Others argued that Paulhamus shouldn't have put a small business like Old School Pizza on blast for an isolated incident they feel is more the fault of a vendor than the restaurant.

"At the end of the day I’m sharing my personal experience and we’re all entitled to our own opinions," Paulhamus added to her post.

Old School Pizza, which offered Paulhamus a refund and an apology, gave the following statement to WBRE/WYOU News 13 :

Old School Pizza deeply apologizes for the disturbing event on Friday. We are currently looking for the source and have been in contact with our wing provider. We are trying figure how this could have happened with the numerous checkpoints involved. We have cooked approximately 361,000 pounds of wings over the course of 12 years and this is the very first time an incident like this has happened. We are working with the parties involved the best we can to rectify the issue and move forward. We thank our patrons for their continued support.

It doesn't make a ton of sense to crush a business and its employees too much for a mistake like this, although the glaring oversight of a literal chicken's head in a batch of wings might say something about what the eyes wish not to see. The business ultimately bears responsibility for ensuring the safety and quality of its food.

Large corporations can often withstand quietly settling lawsuits when these types of incidents occur, such as a Bucks County Chick-fil-A that was sued when a woman found a dead rodent baked into her chicken sandwich. For a small business, you'd like to see them tighten up their kitchen operation, but one chicken head out of 361,000 pounds of chicken is a freak occurrence.

What these incidents ideally should do is make us all think a bit more consciously about what goes into our patterns of consumption, from the labor conditions of those involved to the animals that are sacrificed to become a side dish. It's also a reminder of the legendary story of Mike the chicken, who lived without a head for 18 months.