Why did a chicken live for 18 months after its head was cut off? 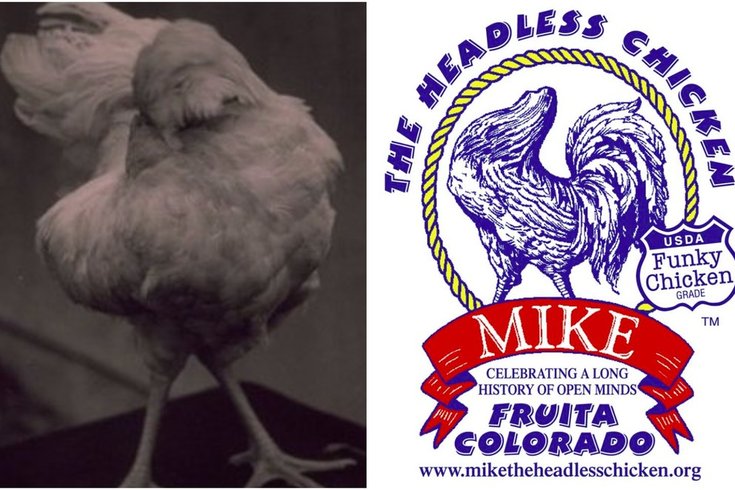 A chicken named Mike lived for 18 months after its head was cut off. Sunday, Sept. 10, 2017 marks the 72nd anniversary of the attempted beheading.

When it comes to life’s great mysteries pertaining to chickens, a few questions get bandied about with regularity.

The Beastie Boys weren’t the first – and won’t be the last – people who’ve pondered “which came first, the chicken or the egg?” Also, generations of children have giggled their way through the “why did the chicken cross the road?” query.

Sunday marks the 72nd anniversary of the genesis of a lesser-known – yet considerably more fascinating – poultry mystery.

The legend started on September 10, 1945, when a farmer went out into his Colorado yard to grab a live chicken. His plan? Turn that live chicken a dead chicken, and serve it as the family’s dinner.

So, he took an axe to the heads of dozens of chickens, including a five-and-half-month-old named Mike. What happened next was the stuff of mythic lore but, in this case, reality.

While the axe pretty much beheaded said chicken, it missed its jugular vein. Mike survived with a brainstem, body and one ear intact. Here's how the farmer's kin described what happened next to the BBC a few years ago:

"They got down to the end and had one who was still alive, up and walking around," says the couple's great-grandson, Troy Waters, himself a farmer in Fruita. The chicken kicked and ran, and didn't stop.

It was placed in an old apple box on the farm's screened porch for the night, and when Lloyd Olsen woke the following morning, he stepped outside to see what had happened. "The damn thing was still alive," says Waters.

"It's part of our weird family history," says Christa Waters, his wife.

That was the day young Mike became the famous “Mike the Headless Chicken.”

He would then embark on a post-axe career, going viral insofar as things went viral in post-WWII America, landing stories in Time and Life magazines and pulling in some $4,500-a-month for its owner (that’s a lot more in today’s dollars).

For sustenance, the farmer gave Mike watered-down milk through an eyedropper and fed him small grains of corn.

Check out this video for more of the back story:

I’m sharing this story this week because Sunday is the anniversary of Mike’s – um – transformation. Today, there’s a post-mortem Facebook page in his honor, and an annual festival in the Colorado town where he defied the odds. (The next one will be held on June 1 and 2, 2018).

Do you find yourself wondering, “Hey, how can a chicken live without its head?”

Part of the reason that a chicken can live without its head has to do with its skeletal anatomy, according to Dr. Wayne J. Kuenzel, a poultry physiologist and neurobiologist at the University of Arkansas.

The skull of a chicken contains two massive openings for the eyes that allow the brain to be shoved upwards into the skull at an angle of around 45 degrees.

This means that while some of the brain may be sliced away, a very important part remains.

“But because the brain is at that angle,” says Kuenzel, “you still have the functional part that’s so critical for survival intact.”

Mike was one of the lucky ones, if you can consider living a headless life as a freak-show novelty to be a lucky twist. I mean, I guess it beats being dead, but I really don't want to ever find out.

As with all life stories, death looms at the end.

On March 17, 1947, Mike the Headless Chicken's luck ran out in a Phoenix, Arizona, motel room.

While he survived a beheading, he couldn't defeat a corn kernel that got lodged in his throat.