Gov. Wolf: 'We can't flip a switch and reopen the commonwealth. There isn't going to be one, big day' 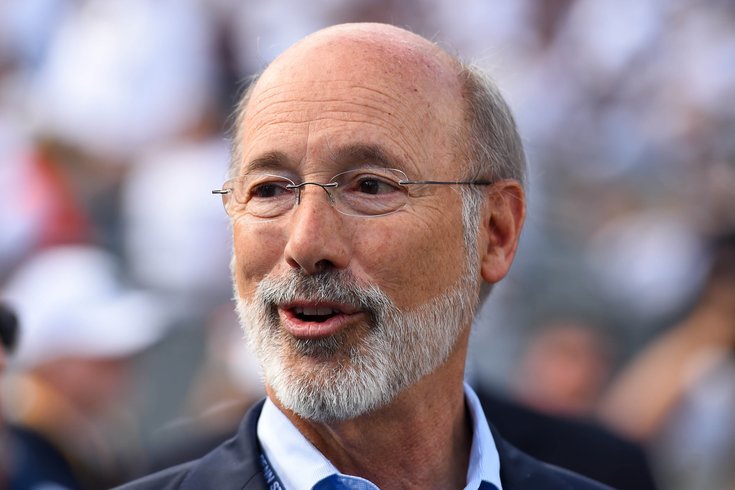 Gov. Tom Wolf discussed the framework to reopen Pennsylvania, pending more progress in the containment of the COVID-19 outbreak. The state will move in phases and use a regional approach, though Wolf did not provide a timeline.

Pennsylvania Gov. Tom Wolf introduced the tentative framework on Friday that the state will use to evaluate reopening society after sufficient progress is made to contain the spread of the coronavirus.

The governor declined to be specific about a timeline to reopen businesses and lift restrictions on other non-essential activities. Details of Pennsylvania's plan come a day after the White House issued broad guidelines for a three-phased approach to begin easing social distancing guidelines and bring back specific sectors of the economy, pending further progress.

President Trump's guidelines leave the discretion about how and when to reopen individual states in the hands of the governors.

"We need to be careful and deliberate," Wolf said. "We need the flexibility to react to new outbreaks. Unfortunately, we can't flip a switch and reopen the commonwealth. There isn't going to be one, big day."

State officials will take an evidence-based, regional approach to reopening the state's economy. Actions will be based on scientific data – not impulse or emotion, Wolf said.

Pennsylvania reached 29,441 positive cases of COVID-19 on Friday, with 756 fatalities since the start of the pandemic. The state continues to see increases of between 1,000 and 2,000 new patients per day, a rate that continues to pose problems amid national shortages in testing supplies, personal protective equipment and hospital capacity.

A Pew Research Center poll released this week found that two-third of Americans are concerned state governments will lift restrictions on public activity too quickly, Approximately 81% of Democrats and Democratic-leaning independents expressed this fear, while 51% of Republicans and Republican leaners shared this worry.

Wolf said Pennsylvania will need to have adequate access to COVID-19 testing and PPE in order to reopen. The state also will need a monitoring and surveillance program that allows state officials to "deploy swift actions for containment or mitigation."

Additionally, safeguards initially will remain in place to protect vulnerable populations, like nursing home residents. And there will be limitations on large gatherings.

For at least several more weeks, social distancing will continue while the state puts together its plan for a phased reopening.

The governor thanked Pennsylvania residents for their cooperation, suggesting that there are already hopeful signs the state has made progress.

"We have not had the explosive growth experienced by our neighboring states thanks to your sacrifices," Wolf said in remarks to Pennsylvania residents. "And because of our collective efforts, we will likely avoid the hard reality that we've seen in places like Italy."

Wolf said he will provide more specifics to his plan next week. But he said it provides a framework to increase wages, improve worker protections, expand sick and family leave policies and increase affordable and high-quality child care.

Philadelphia Mayor Jim Kenney, who has followed the lead of Pennsylvania Gov. Tom Wolf, maintained Friday that the city's decisions also will be based on medical expertise, and health commissioner Dr. Thomas Farley said Philadelphia is not ready to consider reopening in concrete terms.

"We are absolutely not talking dates right now," Farley said. "I know that's difficult for people. The uncertainty of this is really tough, but we need to have certain conditions in place in order for us to reopen safely. If we can't test enough people to know where this virus is, then we can't reopen the economy. I hope other states that are thinking about reopening are considering that for themselves, as well as us."

Philadelphia reported 518 new cases of COVID-19 on Friday, bringing the city's total to 8,563. There have been 298 deaths from the virus among city residents. Across Southeastern Pennsylvania, 1,633 people are hospitalized for coronavirus complications. City hospitals now are treating 852 COVID-19 patients as demand for care appears to be growing.

A regional reopening, similar to the way the state was shut down, Wolf said, reflects that the COVID-19 outbreak has been more harshly felt in some counties than others. Philadelphia has been among all hardest hit.

"When we get to the point where we're ready to reopen, it has to be a staged approach and it will be," Wolf said.

Kenney, remarking on essential supply shortages and the current rate of infection, said reopening Philadelphia prematurely will result in more damage in the long-run, despite the wishes of some in the business community.

"It will actually hurt business even more than it's being hurt now," Kenney said during his briefing on Friday. "If we have a huge surge because we don't test, we don't track, we don't quarantine, then we open and we go sliding backwards, the economy is going to take a double hit."

Farley said that at the level people in Philadelphia are being infected now, it would be impossible to have the safeguards in place to stop a second outbreak.

"We're looking at the epidemic curve," Farley said. "Right now, at 500 new cases a day, frankly, even if we were testing everybody, we know we can't do the contact tracing for 500 people a day. It's going to have to get to a much lower level for us to be able to quickly identify those contacts and stop the chain of transmission."

Pennsylvania needs to stay flexible as it assesses a strategy to reopen, Wolf said.

"Pennsylvanians can alleviate this crisis if we choose to do so," Wolf said. "The standards and actions I've outlined can help people safeguard our health care system. They can help jump-start the economy when the time is right. But moving to reopen large swaths of our economy now and reducing our flexibility to respond is only going to prolong this crisis."