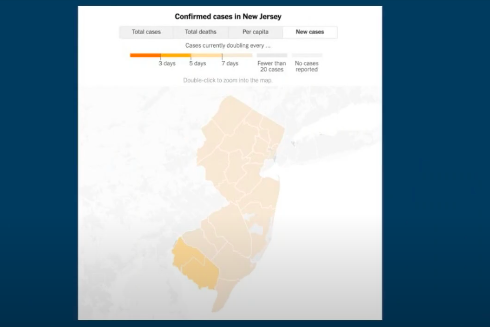 The rate at which COVID-19 cases are doubling across New Jersey continues to decline, but they are rising the fastest in Salem and Cumberland counties.

Coronavirus cases are doubling at faster rates in Cumberland and Salem counties than elsewhere in New Jersey – despite the vast majority of COVID-19 cases appearing in the northern part of the state.

But no New Jersey counties are seeing their COVID-19 cases double in every five days or less – an encouraging sign that the state is flattening the curve of infections. But Murphy urged residents against letting up on social distancing.

“We’re not home yet by any means, but our efforts are working,” Murphy said. “That’s good news. It means that we’re aggressively slowing the transmission of COVID-19.”

Despite their higher infection rates, Cumberland and Salem counties have a relatively small number of COVID-19 cases and deaths.

Dr. Rich Besser, the CEO of the Robert Wood Johnson Foundation, and former U.S. Department of Homeland Security Secretary Jeh Johnson have been appointed as New Jersey’s representatives to the seven-state regional council tasked with developing a plan to reopen the economy.

Besser, who grew up in Princeton, has served the Robert Wood Johnson Foundation since 2017. He previously served as the acting director for the U.S. Centers for Disease Control and Prevention and as the chief medical expert at ABC News.

“We’re blessed to have two folks like this in New Jersey to begin with, and we’re further blessed by their willingness to step up and serve,” Murphy said. “They will make a real difference. We could not have two better professionals, two better New Jerseyans standing up in our regard.”

The multi-state panel, which includes Pennsylvania and Delaware, will consider economic, social and scientific data to reopen the Northeast while minimizing the risk of future infection surges.

The 21-person council will consist of three individuals representing each state: the governor’s chief of staff, an economic development expert and a public health expert. Murphy’s chief of staff George Helmy will serve on the panel alongside Besser and Johnson.

New York, Connecticut, Massachusetts and Rhode Island are also part of the council.