The state cannot "turn back the clock to three months ago," governor says 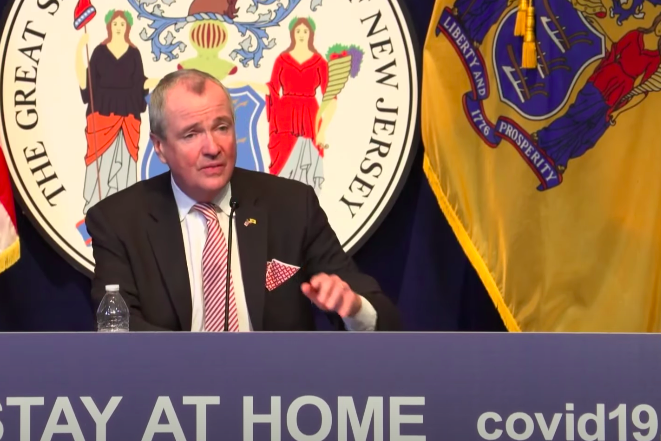 Asked if people would soon be able to resume having gatherings in New Jersey, Gov. Phil Murphy said on Wednesday, 'I just can't see it.'

There will be "a new normal" in New Jersey following the COVID-19 pandemic, Gov. Phil Murphy said Wednesday.

The governor was asked during his daily briefing when he thought life in New Jersey would resume without things like social distancing and wearing face masks in public. Murphy said he doesn't envision a situation where the state can "turn the clock back to three months ago" based on the conversations he has had with health experts.

"People talk about a new normal, and I think that's a reality," Murphy said.

That could include social distancing protocols at restaurants, where employees continue to wear masks and gloves, tables are kept at least six feet apart, and customers are required to have their temperatures checked upon entering the establishment. Friendly gestures, such as shaking hands, hugs, high-fives, or kisses on the cheek, he said are "postponed for the foreseeable future."

One of the keys to easing social distancing guidelines and reopening the economy will be the widespread availability of rapid testing for the coronavirus. So far, only New York, California, and Florida have performed more tests for the virus than New Jersey, but Murphy said he is pushing for more testing supplies from the federal government.

"We're not alone in our desire to have more sites and more tests," Murphy said. "We've wanted that from moment one. Every state in the entire nation is facing the same issue as we are."

The state's two FEMA-partnered locations at Bergen County Community College and the PNC Bank Arts Center in Holmdel have been approved to remain open through May. New Jersey currently has about two dozen publicly-accessible testing sites across the state.

Murphy ordered all New Jersey residents to stay at home on March 21, as well as ordered all non-essential businesses across the state to close and banned all private and public gatherings.

He warned residents again to not get their hopes up about getting together for events such as graduation ceremonies, religious services, and sporting events any time soon. An announcement about the remainder of the school year in New Jersey is expected by the end of the week.

"I don't see a normal gathering in the foreseeable future," Murphy said. "I just don't see it. I'll be the happiest guy on this planet if I'm wrong."

Any decision to ease social distancing guidelines and reopen the economy will be made on a regional, multi-state basis, Murphy said earlier this week. New Jersey is part of a seven-state panel working on a  plan to restart the economy that adheres to public health and minimizes the risk of spreading coronavirus after the pandemic has passed.

New Jersey reported 2,625 more coronavirus cases on Wednesday, bringing the state's total number of cases up to 71,030. There have been 3,156 deaths due to the virus in New Jersey, which is the second-most of any state.

While North Jersey has been hit hardest by COVID-19, there are 3,998 positive cases and 108 deaths due to the virus in South Jersey.

The increase to accommodate patients with COVID-19 is due in part to three temporary hospitals in each region of the state and the availability of beds on the USNS Comfort last week.

One of the makeshift hospitals is being set up at the Atlantic City Convention Center for South Jersey residents. The 250-bed field medical station could begin accepting patients by the middle of next week, state officials said Tuesday.

The surge in hospitalizations due to the coronavirus has arrived in North Jersey and is expected to come soon to both Central and South Jersey, state officials said. There are 8,270 residents hospitalized with COVID-19, and the growth rate in hospitalizations in New Jersey is 3%. Since April 4, approximately 6,300 COVID-19 patients have been discharged from hospitals.

New Jersey officials are working "intensely" with Rutgers University and Middlesex County, Murphy said, to help roll out the rapid saliva test for the coronavirus.

"I think it is a source of great pride to see NJ's own flagship university stepping up to help fill the testing gap," the governors said. "I am proud of the work at Rutgers and look forward to moving forward with them."

The saliva test has received emergency use authorization from the U.S. Food and Drug Administration, and it could eventually scale up to tens of thousands of samples daily across the United States with the help of automated lab technology that can rapidly process results.

The test relies on samples collected by people spitting in a tubes, which is a safer form of screening for health care providers who now administer nasal swabs, which are also limited in supply.

Scientists at Rutgers partnered with Accurate Diagnostic Labs develop the test, and some of the world's largest life sciences companies and laboratories have reached out to Rutgers about the test and expanding capacity of it across the country.

The test was set debut on Wednesday at a drive-thru site in Edison, New Jersey, with first results expected back within 24-48 hours, according to Middlesex County officials.