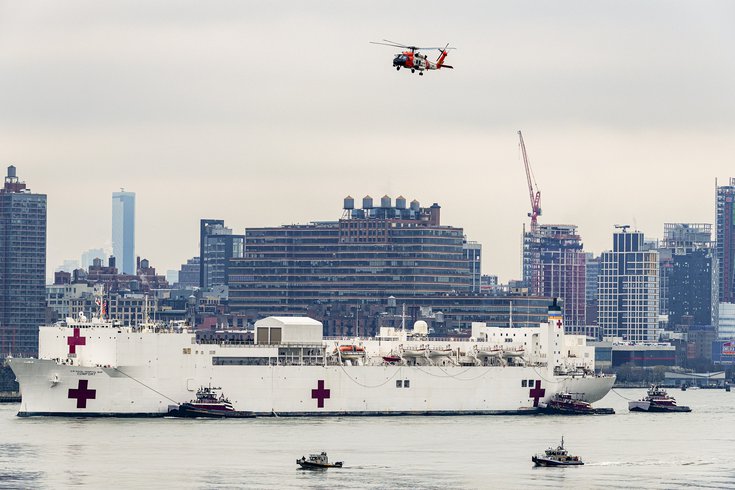 Some beds on the USNS Comfort will be allocated to New Jersey patients. Also, President Trump announced Monday the ship can be used to treat coronavirus patients.

New Jersey has received approval from President Donald Trump to use beds on the USNS Comfort to care for some of the state's patients, Gov. Phil Murphy said on Monday.

The hospital ship, which has roughly 1,000 beds, was sent by Trump to dock in New York City last week to help the region in its fight against the coronavirus outbreak. The original purpose of the ship was provide beds for people who need to be hospitalized but are are not suffering from the coronavirus, allowing land-based hospitals to treat more people with COVID-19.

However, after calls from local officials for the federal government to allow for COVID-19 patients to be treated on the ship, New York Gov. Andrew Cuomo said that Trump had agreed to the request on Monday.

Securing space on the USNS Comfort is the latest in a series of moves by New Jersey to increase bed capacity across the state during the coronavirus outbreak. It also came on the same day as when the state projected that anywhere from 9,000 to 36,000 coronavirus cases could result in hospitalization, and that the peak could come as soon as this Friday for hospitals.

“This is a big step for us,” Murphy said. “I thank both the president and the vice president.”

Murphy warned, however, that an easing of social distancing guidelines could increase that peak and push it back as late as April 28, which he said would be “literally disastrous” for the state’s health care system.

The state has started to set up three temporary regional hospitals to help create bed capacity for non-COVID-19 patients needing hospitalization. One of the makeshift hospitals will be housed at the Atlantic City Convention Center in South Jersey and is expected to be ready with 250 beds by April 14.

State officials have been working with health systems to expand bed capacity in their facilities, and they also are seeking to reopen closed hospitals, which could provide approximately 1,300 more beds. State officials said their goal is to add 2,300 beds in the coming weeks.

One coronavirus projection model, run by the University of Washington, has predicted New Jersey will run out of hospital beds by the time cases peak later this month.

New Jersey had 18,433 acute care beds and an additional 2,000 beds for critical care as of two weeks ago, according to state officials. Though the state's hospitals were currently meeting the needs of New Jersey patients, Murphy warned that they eventually could become overwhelmed by coronavirus patients.

Murphy also signed an executive order on Monday to allow retired public employees to return to work within state and local government to help out New Jersey in its fight against the coronavirus without having their pension statuses be impacted. Retirees are eligible to return to work if they retired before the implementation of the executive order, have been out of work for at least 30 days, and are needed in order to combat the virus.

The executive order also removes restrictions on law enforcement from adding to their ranks during the outbreak. Any municipality may employ whichever number of officers that it needs in order to protect public health and safety during the crisis.

“Right now, we need all the experienced help we can get – whether it be retired law enforcement officers returning to duty, or nurses who can return to University Hospital,” Murphy said.