Collar county officials say they have the infrastructure in place to distribute shots equitably, but simply need more doses 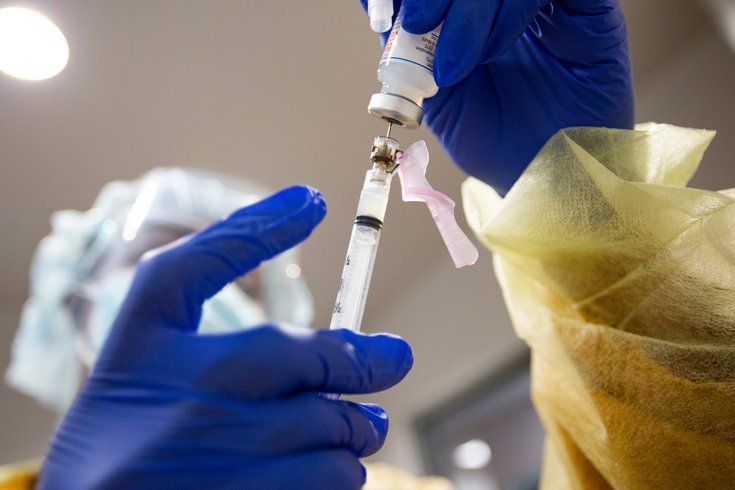 County leaders in the Philadelphia suburbs want Pennsylvania to give them more discretion over logistics for COVID-19 vaccinations. Montgomery, Bucks, Chester and Delaware counties say they have the infrastructure in place, but they need more vaccine supply.

The four suburban Philadelphia counties may get a compromise after pushing back against a Pennsylvania plan to establish a regional COVID-19 mass vaccination site.

Instead of receiving just one clinic run by the Pennsylvania Emergency Management Agency, there appear to be two on the way for Bucks, Chester, Delaware and Montgomery Counties.

Elected officials from the four counties had met with state health department leaders earlier this week to discuss options for ramping up vaccinations. They argued that the counties would be better served by receiving direct vaccine allocations to use at existing facilities, which they believe would be more equitable and efficient.

Pennsylvania Gov. Tom Wolf said Friday that two PEMA clinics would be offered to the four counties, providing a half-measure to address their complaints. Health department spokesman Barry Ciccocioppo confirmed the Philly suburbs have been offered two sites that would split 42,000 doses per week of the Johnson & Johnson vaccine, which only requires one shot.

State officials reportedly want one of the PEMA sites to be established in King of Prussia. It would be one of several PEMA clinics across the state to utilize Pennsylvania's supply of the Johnson & Johnson vaccine. The state's Pfizer and Moderna vaccine allocations would continue to be sent to county governments.

Ciccocioppo said the state health department is awaiting final recommendations from the four counties on the two proposed PEMA sites for the region and has asked for a decision by the end of the day Friday.

Suburban Philly officials asserted this week that they have the appropriate infrastructure in place to run their own sites and simply need more doses. They had asked the state to prioritize them to receive Johnson & Johnson shots to alleviate an alleged vaccine deficit.

The Department of Health denied that request.

"We are extremely disappointed to hear that PA DoH is not considering our request to allocate the Johnson & Johnson vaccine directly to Bucks, Chester, Delaware and Montgomery counties," the counties said in a joint statement on Thursday. "We have reiterated our concerns about establishing a regional PEMA site for many reasons, and we remain deeply concerned that equitable distribution will be compromised at such a site."

Suburban officials warned that a single regional site run by PEMA would limit access in a sprawling region, particularly among people who lack personal transportation. Instead, they proposed that the state provide two regional sites — one for Bucks and Montgomery counties, the other for Chester and Delaware counties.

"We also remain concerned that without an allocation of single-shot Johnson & Johnson vaccines our efforts to efficiently vaccinate our most vulnerable residents will be hampered," the counties said. "This includes residents experiencing homelessness, homebound individuals and people within our correctional facilities. For all these reasons, we implore Pennsylvania DoH to allocate its surplus supply of the one-shot Johnson & Johnson vaccine to counties directly."

The counties also expressed concerns about residents having to pre-register on another vaccine sign-up database and whether the ones they've already signed up for will be honored. They questioned how equitable a PEMA site would be if it lacks phone registration and language services for those who don't speak English.

"Instead of working with local elected officials and county health departments closest to the people we serve, the state has chosen to take the advice of a Boston logistics company to establish regional sites as our local mass vaccination sites sit underutilized," the counties said. "We have highly qualified public health and safety teams in place, high-volume locations secured, and more than 500,000 people waiting on our collective lists to get their shots. We just need more supply."

Earlier this month, suburban officials questioned the state's distribution of vaccine doses after a Philadelphia Inquirer analysis found that they had received fewer COVID-19 vaccines per capita than counties with much smaller populations.

State officials argued that that vaccination rates in the Philly suburbs — hovering between 15-20% of their populations — are roughly in line with the rest of Pennsylvania. They also said raw vaccine allocation data doesn't account for large health systems that have their vaccines shipped to one location and redistributed to facilities in other counties.

Pennsylvania officials signaled Thursday that they plan to meet President Joe Biden's goal of opening up COVID-19 vaccinations to all adults by May 1.

"It is aggressive but we are going to work to be able to comply with it," acting Secretary of Health Alison Beam said during a Thursday press briefing.

Philadelphia, which receives its vaccine allocations directly from the federal government, has made a similar pledge.

The state hopes to complete its Phase 1A vaccinations by the end of March and would aim to move through all of Phase 1B — which covers frontline workers, including police — by the end of April. Part of that plan relies on using the state's allotment of the Johnson & Johnson vaccine through a series of targeted clinics.