Parts of Pennsylvania were dusted with snow flurries this past weekend

Yep, you read that right 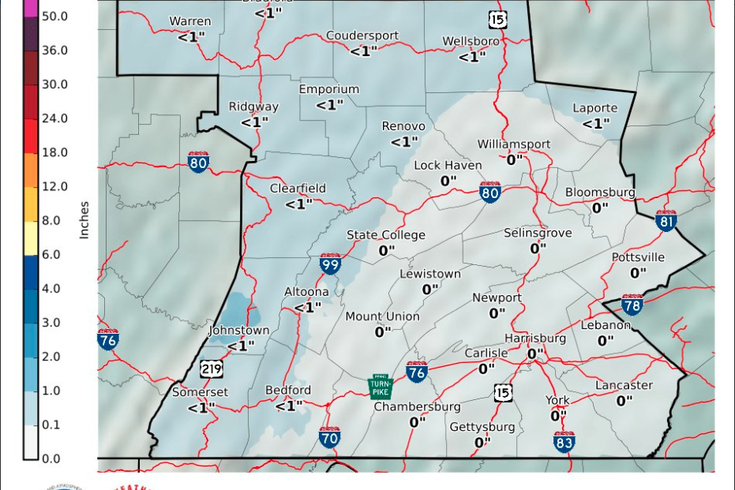 The National Weather Service predicted over the weekend certain regions in central Pennsylvania would get less than one inch of snow, including near Lake Erie.

If you can believe it, parts of northern Pennsylvania saw snowfall this past weekend, although there was little-to-no accumulation.

According to the National Weather Service in State College, counties including Potter, Somerset and Tioga in northern and western Pennsylvania experienced high gusts of wind and cold temperatures over the weekend, with some of those regions getting a coating to up to 2 1/2 inches of snow mixed with rain.

In northern areas like Coudersport, Potter County, snowfall began early Sunday morning. On social media, people were reporting some light snow in Erie and Clifford, too.

A cold front will push through this evening, with rain showers transitioning to snow showers tonight across much of western and central Pennsylvania. Little or no accumulation is expected. Winds become strong late tonight and tomorrow with frequent wind gusts 30-40 mph #PAwx pic.twitter.com/w10xMirfrh

Meanwhile, the Philadelphia region had freeze warnings and frost advisories over the weekend, too. Most of southeastern Pennsylvania, the southern half of New Jersey and northern Delaware have experienced these low temperatures.

More counties were added to the list of regions where the growing season has ended, including Middlesex, Monmouth, Ocean and Cumberland counties in New Jersey.

Freeze Warnings (dark blue) and Frost Advisories (light blue) have been issued our most of SE PA, southern half of NJ, and northern Delmarva for tonight. It'll be another cold start to the day tomorrow so be sure to bundle up on your way out the door! #pawx #njwx #dewx #mdwx pic.twitter.com/CnEIf7FVXs

According to the NWS, the State College area could receive more snow showers on Tuesday. In Philadelphia this week, the forecast is for temperatures to be mild during the day and but cold at night. Here is the NWS outlook: