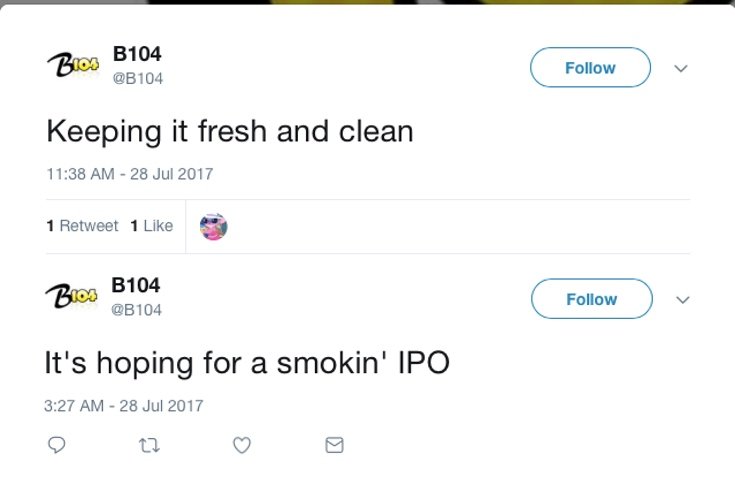 Working in modern radio can be really, really difficult. As stations are stripped of staff in cost-cutting maneuvers by media conglomerates, those left are often forced to wear many hats, handling promotions, on-air duties, social media, etc.

I say this as a disclaimer: I don't mean to mock B104, a popular radio station in the Lehigh Valley where I interned in college. In fact, I'd like to point out the accidental brilliance that an apparently uncaught mistake has produced for at least a month.

Media organizations often have different ways of handling their social media accounts. Larger organizations tend to have one or several staff members dedicated solely to handling Twitter, Facebook and any other platforms.

Smaller organizations either add social media to a staffer's list of responsibilities, or they employ a program that streamlines the process, automatically posting links to stories and new content.

B104 uses the latter, but there's a glitch in the system. Because since at least mid-July, the station's Twitter account has been posting story teasers for content that's presumably supposed to be included in the tweet, but simply isn't, resulting in sometimes dark, sometimes hilarious posts like these:

What's most odd about the whole thing is B104 is in no way a small station. It's the most well-recognized mainstream music station in a populous area, and on Twitter, it has more than 5,000 followers.

Curiously, the account has more than 39,000 total tweets, but no tweets past July 19 — at which point the no-link trend was happening — are loading.

The feed is inadvertently a satirical reflection of the digital content production landscape. Some tweets give away what the story link was supposed to be with keywords like Katy Perry and Taylor Swift.

Others are vaguer, often ominous and even sinister.

Promotions director Mandy Schnell said the station recently started using an automated social media program, but it's been "buggy" and that she would check it out. For her sake (likely the nicest person I've met working in media), I hope she can figure it out. But for the sake of the absurdist humor, I can only pray for more tweets like "Dang, girl!"