FYI Philly, you can now recreationally throw an axe 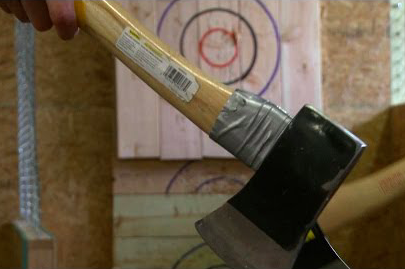 The summer of 2016 has been an unbearably hot and humid one in Philadelphia — two meteorological qualities that tend to make people infirm, rageful and erratic. It's serious: 13 people were shot in one weekend, four people have died from heat-related medical complications and two suspects robbed a man scooping water ice rather than, you know, just get some water ice.

And all we have to show for any of it is this sweet AP photo of a lightning strike.

Unclench your teeth, Philadelphia. All of that is about to change, thanks to a new therapeutic outlet for people who are beginning to froth at the mouth.

Urban Axes, a recreational axe-throwing facility, is set to open in East Kensington in September.

"Axe-throwing ... like darts, only bigger and more satisfying!" reads the homepage of the new website for Urban Axes.

If your aggressive spirit is tired of bowling, darts and billiards, this is the lane to your emotional redemption. They'll be offering group events for 8-80 people, eight-week leagues and yes, even corporate team-building events.

This is, in many ways, safer than a gun range, by the way. Just last week, a man tragically shot and killed himself at a Philadelphia gun range because he believed his weapon was jammed.

Everyone knows, too, that lumberjack chic is forever.

These sweltering summers aren't likely going anywhere anytime soon. Federal scientists said July was Earth's hottest month on record. A record water temperature was set at the Jersey Shore this month. Philadelphia's first climate-readiness report, released last December, projects a "warmer and wetter future" with the "potential to decrease quality of life," a ruinous summation of climate change if there ever was one.

Even if an ice age swoops in, even if the Old Farmer's Almanac says next year will be milder, we can always look to our lazy rap as America's angriest city. If it justifies safely throwing axes, we might as well embrace it.