Peralta is the hero we all need: 'Brooklyn Nine-Nine' Season 6 trailer 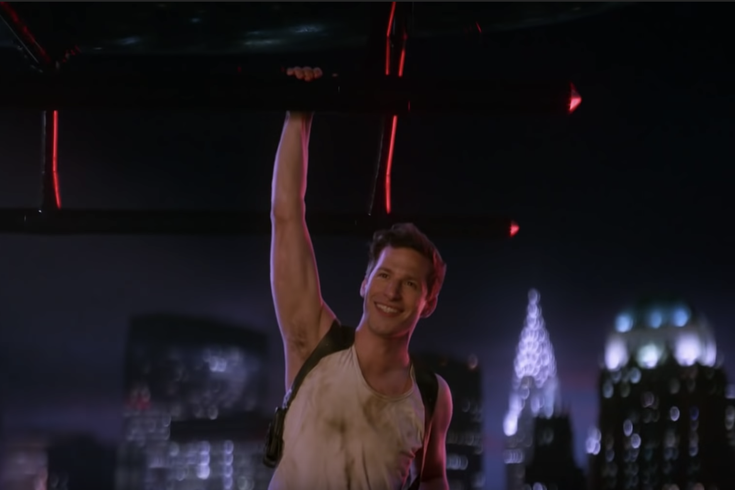 The highly anticipated Season 6 of "Brooklyn Nine-Nine" is almost here and to celebrate NBC, the show's new home, released the first trailer for the new season.

The trailer begins with an adaptation of Jake Peralta's (Andy Samberg) favorite movie, "Die Hard," as the crew recreates one of its most famous scenes. The shots are met with explosions and some very serious hero behavior.

In one scene, Jake watches a helicopter fly by as he tells Amy, Terry, and Rosa, "We gotta get out of here. This building's going to blow." Naturally, there's no way out, but of course, Jake has the answer.  His sidekicks propel down the building using ropes, and while there aren't enough to save him - don't worry, Jake's got it covered.

"Time to wrangle me a chopper," the lone detective mentions confidently as he spins into the air, as the building explodes behind him. As he somewhat swims through the air, the hellicopter seems to draw further away, Captain Holt comments, "Jake is the greatest cop in the city - nay the world." The shot jumps to a holier-than-thou Jake holding on to the chopper with one arm, because, obviously, he's an American hero. He comments, "Suck it gravity," as the team chants, "Jake!" repeatedly.

But as it turns out, this elaborate fantasy is really just Jake's vision for a new recruitment ad, and, of course, Capt. Holt gives a very stern no. Watch the trailer below.