Pets Plus goes from commercial to rescue and shelter dogs in its 10 N.J., Pa. locations 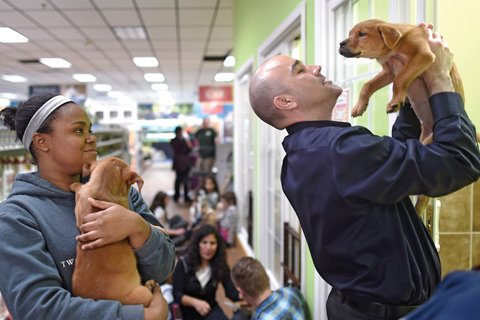 An adoption event at a Pets Plus store in Pennsylvania.

A Philadelphia-based pet store chain has decided to do the right thing and switch from selling commercially raised puppies to rescue dogs – even if it means taking a dent out of its bottom line.

A representative from the Humane Society of the United States approached the owners of Pets Plus one year ago to talk to them about how more than 2 million dogs in the U.S. are euthanized every year due to overpopulation, especially in the South.

“When he told me there were so many puppies in the South being euthanized, and after taking a trip to Georgia and seeing what was happening, I just knew that it was our calling to do this,” said Pets Plus co-owner Bruce Smith.

The Humane Society estimates that a dog dies in the U.S. every 13 seconds because shelters just don’t have enough resources to keep them all.

So Pets Plus is now converting its 10 stores in Pennsylvania and New Jersey so that the dogs are sourced from shelters instead of commercial breeding sites. The chain plans to have all of its stores sign the Humane Society’s Puppy Friendly Pet Stores pledge by the end of the year and to eventually offer rescued cats and guinea pigs as well. 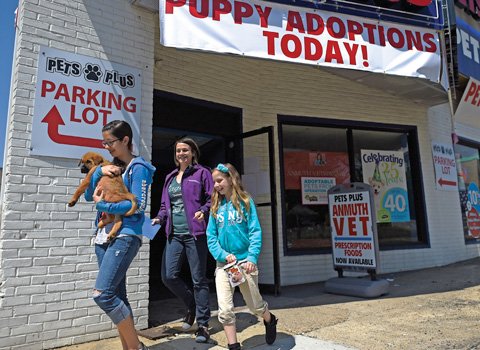 An adoption event at a Pets Plus store. Mark Makela/Humanesociety.org

The Pets Plus of Bensalem will celebrate becoming the sixth store to adopt the new policy with a big adoption party this Saturday. (You can see some of the cuties available for adoption here.) The party will be at 1336 Bristol Pike from noon to 5 p.m. and will feature face painting, a cash grab machine, free food and giveaways.

“This program has hurt the company financially because of the difference of the retail price (compared) to doing adoption, but…we’re hoping the influx of new customers will make up the difference,” said Smith.

Smith estimates that he’s getting 10 percent more customers than before, many of them people who would otherwise never shop at his store.

The owners decided that the new policy is worth it after a representative from the New Jersey group Animal Aid took them on a trip to Georgia.

Pets Plus was, at the time, sourcing its pups from a commercial facility in Ohio. The chain made sure the facility was not a “puppy mill,” a cruel farm that churns out puppies for sale by raising them under inhumane conditions, by requiring a background check and Food and Drug Administration inspections and licenses. Still, Smith realized after the trip down South that the chain still was contributing to a problem. 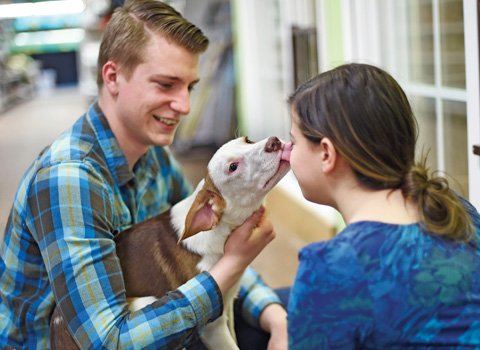 Customers search for a new family member at a Pets Plus store. Mark Makela/Humanesociety.org

“When she showed us how the dogs were used for dog fighting down there, and the overpopulation in all the different shelters – they all had time limits on them – it was just a no-brainer, we knew it we had to switch over to the adoption program,” said Smith.

The dogs will come from humane societies and rescue groups in Kentucky, New Jersey, Mississippi, Virginia and West Virginia. Deliveries come once a week.

“We get calls saying, ‘Bruce, if you don’t take these dogs, they’re going to be euthanized this week,’” said Smith.

Once the dogs reach the store, they are safe. The store keeps the dogs in its kennels until they have found a home.

Photos by Mark Makela, courtesy of the Humane Society of the United States.