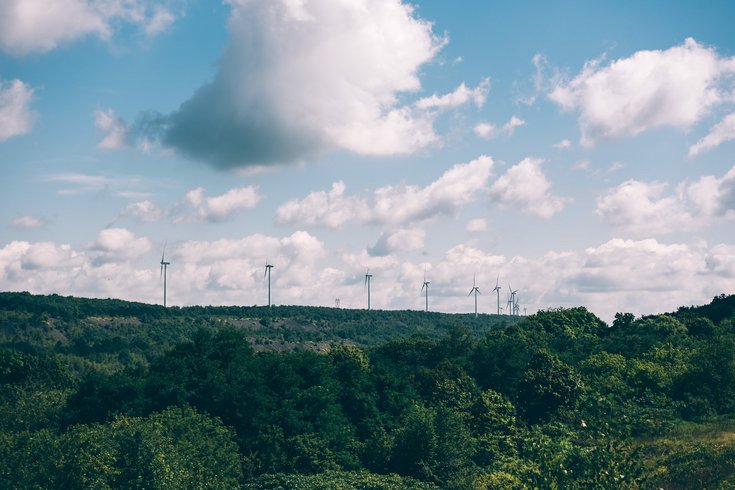 Mirroring the coal is a long line of windmills, showing the fairly recent and contrasting shift towards renewable energy.

More than 50 businesses, organizations, and individuals signed and submitted a petition for rulemaking Wednesday to Pennsylvania’s Environmental Quality Board to adopt a proposed regulation aimed at curbing greenhouse gas emissions and fossil fuel use across the state.

The petition, led by the Philly-based Clean Air Council, proposes a “cap-and-trade” program. Cap-and-trade, State Impact Pennsylvania explains, sets a limit on emissions across the state’s economy, and allows companies to buy and sell (hence the name) allowances to pollute certain amounts.

“The proposed regulation will achieve the emissions reductions that the latest scientific reports conclude are necessary to avoid the very worst effects of climate disruption,” Joseph Minott, Executive Director and Chief Counsel of the Clean Air Council, said in a release Wednesday.

According to the Clean Air Council, Pennsylvania’s total emissions exceeded all but 21 countries across the world in 2014.

In terms of the United States, Pennsylvania ranked third in the country, behind Texas and California, in annual carbon dioxide emissions as of 2014.

As State Impact points out, a petition requesting similar action by the state was rejected by the Environmental Quality Board in 2014.

The Clean Air Council believes a 2017 Pennsylvania Supreme Court ruling will help get different results this time around.

The ruling upheld an interpretation of a decades-old amendment, which established that the state government is responsible for providing clean air.

On Wednesday, the Clean Air Council said the state should be compelled to take action, because “there is no time to waste.”