Eagles partner with Goose Island for "Fly-PA" beer, available at the Linc and in Fishtown 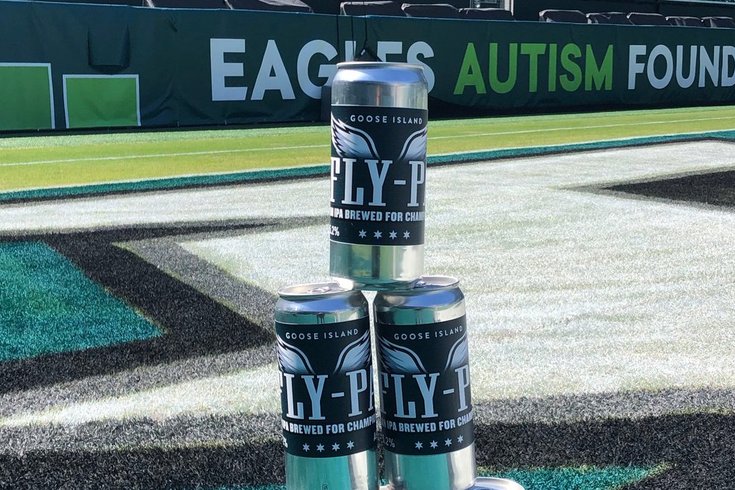 "Fly-PA", a new beer from Goose Island, will be available on draft at Lincoln Financial Field and the Goose Island Brewhouse in Fishtown for the remainder of the season.

The beer, a session IPA, will be available on draft at Lincoln Financial Field and the Goose Island Brewhouse in Fishtown for the remainder of the season, according to the team's Twitter account:

We teamed up with @GooseIsland to launch a custom brew for Eagles fans! FLY-PA drafts will be available all season long at @LFFStadium and Goose Island Brewhouse.#FlyEaglesFly pic.twitter.com/qnsaxVfkaL

The beer itself is a 5.2% brew, which Goose Island describes on Untappd as "our baseball season session, with a hazy twist!" It appears the beer has been available since Sept. 7 at the Brewhouse.

Why did the Eagles decided to team up with a Chicago brewery rather than choosing one of the myriad local craft breweries: Pennsylvania produces the most craft beer of any state in the country.

Perhaps it's a way to remind Chicago, just once more, about the double-doink? Maybe. Still, it's definitely a weird choice.

Provided Fly-PA is any good, is that the Eagles' beer culture is strong. Between Weyerbacher's "Dallas Sucks", Evil Genius's "Fly Like An Eagle", Brewery ARS's "Philly Special", and a host of other Birds-themed brews, Eagles fans have no shortage of options for game day drinks.

And, in case you drink one too many Fly-PAs at the Eagles' Week 3 matchup against the Lions on Sunday, you don't have to worry about driving home: SEPTA is offering free Broad Street Line rides home from NRG Station.

The Eagles face the Lions on Sunday at 1 p.m.