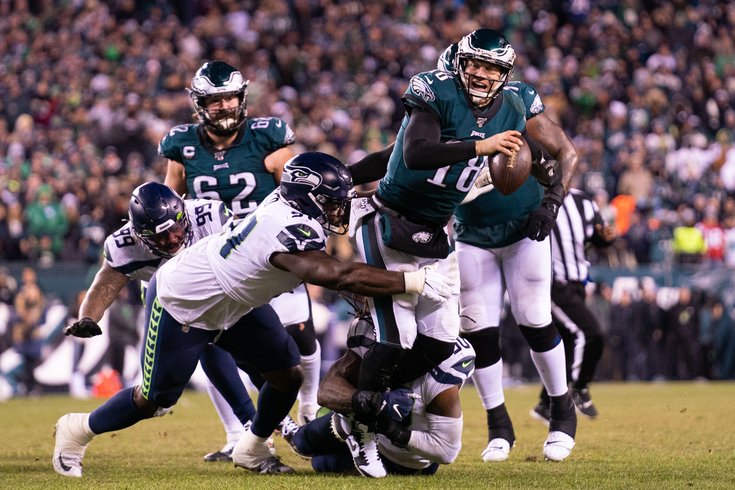 Eagles backup Josh McCown tore his hamstring during the second quarter of the Eagles’ 17-9 season-ending loss to the Seahawks, according to a report. McCown entered the contest – his first ecer playoff game – after Wentz suffered a concussion in the first quarter on helmet-to-helmet hit by Seahawks defensive end Jadeveon Clowney.

It appears that Carson Wentz was not the only Philadelphia Eagles quarterback to suffer an injury during Sunday’s NFC Wild Card game at Lincoln Financial Field against the Seattle Seahawks.

Veteran backup Josh McCown tore his hamstring during the second quarter of the Eagles’ 17-9 season-ending loss to the Seahawks, according to Tim McManus of ESPN. The 40-year-old McCown entered the contest after Wentz suffered a concussion in the first quarter following a helmet-to-helmet hit from behind by defensive end Jadeveon Clowney, ultimately forcing the 27-year-old quarterback to exit the game and not return.

The injury occurred in the second quarter, but nevertheless, McCown played the entire second half with the tear. McCown, who was most recently seen attending the Philadelphia 76ers game on Thursday night with tight end Zach Ertz, is scheduled to have surgery on Tuesday. The recovery period is expected to last upwards of six months.

McCown was 18-of-24 for 179 yards in Sunday’s game, which was the first of his career in the playoffs. Before this past Sunday, McCown had taken only 15 snaps in three games for Philadelphia in 2019 — and not a single one since Week 6 in October when the Eagles lost to the Minnesota Vikings 38-20.

Ahead of the 2019 season, McCown had announced his retirement from football and was set to join ESPN as an analyst. But following preseason injuries to a pair of backup quarterbacks, Nate Sudfeld and Cody Kessler, the Eagles signed McCown in August.

During his end-of-season press conference Wednesday, head coach Doug Pederson applauded McCown for the job he did this season.

“I appreciate everything that Josh McCown did and brought to this team and this organization,” Pederson said. “His mentoring with Carson (Wentz) was second-to-none. Sometimes you have relationships where the coach-to-player relationship is different than the player-to-player relationship, and I think he and Carson had a tremendous relationship all season and it really helped (Carson) perform at a high level.”

In a recent interview on The ThomaHawk Show podcast with Joe Thomas and Andrew Hawkins, McCown described the injury in about as light-hearted of a fashion as one could.

“Gotta head back over to Lincoln Financial (Field) and see if I can find my hamstring somewhere out there,” McCown said. “It’s still over there I think or halfway down my leg by this point.”

The emergency option behind McCown was wide receiver Greg Ward, a former quarterback at the University of Houston. But he kept playing despite the injury.

“(I) looked around and realized I was the only quarterback left,” McCown said.

It’s unclear at this point whether McCown will return to the Eagles in 2020, but Bleeding Green Nation listed him as a potential candidate for the offensive coordinator opening on Pederson’s staff, if McCown decides to retire again.