In some ways, they’re dissimilar. One is a little taller than the other. One excels in space, using his jump-cut abilities to break defender’s ankles, while the other, though still elusive, is more of a power runner. What’s undeniable, however, is that Jonathan Taylor and D’Andre Swift have more in common than just being electric with the ball in their hands — which makes them uncommon among the nation’s top college running backs.

For starters, they’re both from the Philadelphia area.

You’re talking about two of arguably the best six running backs in the country. I don’t think there’s been two at this time that are on the field doing what D’Andre and Jon are doing.

But hardly has the Philadelphia area produced a duo of national-caliber tailbacks like Taylor and Swift at the same time.

Swift, a 5-foot-9, 215-pound true sophomore at Georgia who leads the No. 3 Bulldogs in rushing with 110 in two blowout victories, while Taylor, a 5-foor-11, 220-pound true sophomore at Wisconsin, is leading the nation with 398 yards rushing in two games, including his record-shattering performance this past weekend with a career-high 253 rushing yards and three touchdowns in the Badgers’ 45-14 win over New Mexico at Camp Randall Stadium.

By the end of this college football season, Taylor and Swift, both high school Maxwell Club winners, could be Doak Walker, Maxwell and Heisman trophy finalists.

“The Philadelphia area has always had a good niche to produce good running backs historically,” said Mark Wolpert, who’s in his 10th year as executive director and 24th year overall with the prestigious Maxwell Club. “When you look at the year D’Andre and Jonathan came out nationally, when you look at the running backs in that class, it was a pretty special year. You had a slew of running backs like Alabama’s Najee Harris and others that were nationally renowned.

“Based on what they’re doing in college, I’d have to say now that Jonathan and D’Andre are leading that pack. This is an area that produced Blair Thomas, Mike Rozier, but to my recollection not two of this caliber. You’re talking about two of arguably the best six running backs in the country. I don’t think there’s been two at this time that are on the field doing what D’Andre and Jon are doing.”

Success shouldn’t come as a surprise to either of them.

Swift, whose jump-cutting abilities were breaking ankles in the Philadelphia Catholic League at St. Joe’s Prep, won three PIAA state championships in four years, rushing a combined 56 times for 434 yards and eight touchdowns, and a 7.7 yards per carry and 2.6 touchdowns in each state title game.

Taylor, an explosive power runner, rushed for a South Jersey record 2,815 yards, averaging 234.6 yards a game, while scoring 37 touchdowns (35 rushing). The ironic twist is the rushing record he broke previously belonged to former Glassboro and Wisconsin alum and current Eagle star Corey Clement (who rushed for 2,510 yards in 2011).

Swift and Taylor were eased into their roles for their respective teams.

“I learned a lot my freshman year, about defensive fronts, I learned more about pass blocking than I ever have,” said Swift, who’s in a different scheme than Taylor, sharing touches with James Cook and Elijah Holyfield, the son of heavyweight great Evander Holyfield, this season, after playing behind 1,000-rushers Nick Chubb and Sony Michel last year.

“My first day of camp last year I first started cramping, and it was the hardest thing I ever went through. I found out fast the difference between high school and college football. The first few days last year, I was nervous. But they just threw me and I had to learn really quick. I think St. Joe’s Prep got me prepared for that — and everything. We had a strict schedule there and it’s strict here.” 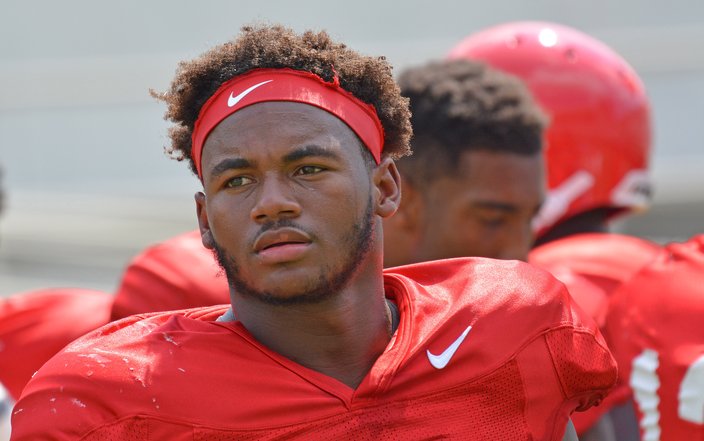 Swift, who carries a 3.8 GPA and achieved a 4.0 during one of his semesters, rushed for 618 yards as a true freshman, including a third-quarter go-ahead touchdown against Notre Dame.

He bided his time, knowing this season he would be getting more touches this season in Georgia’s RPO offense.

“I would say the long run against Notre Dame last year helped me reach a comfort zone, that convinced me I could play at this level,” Swift said. “I still have to work for everything here. Nothing is set in stone. I always liked catching the ball, flexing out to the slot and putting me in space, where I like being.

“There were times last year when I did try to do too much. It’s part of the learning process. There was one play in the Rose Bowl, where I tried to break a run to the outside and got caught [for a loss]. The coaches told me I didn’t need to hit a home run every time. You learn that three yards are good in the SEC. I can’t wait for this season. There’s a lot of stuff that I still feel I have to prove.

Either does Taylor, who started as an impact back as a true freshman. Taylor played in all 14 games with 13 starts for the Badgers last season, recording 299 carries for 1,977 rushing yards (6.6 average) and 13 touchdowns, and caught eight passes for 95 yards. His biggest game was his 249-yards, and two-touchdown performance at Nebraska on Oct. 7, 2017.

That changed over this past weekend, when Taylor erupted for 253 yards on 33 carries — including TD runs of 16, 5 and four yards. Taylor became the eighth player in Wisconsin history to rush for 250-plus yards, and the first since Melvin Gordon against Auburn in the 2015 Outback Bowl.

Taylor was going to be good. To be this good this fast has even come as a shock to him.

I don’t like to read about myself. I stay off social media. Even back home, I didn’t like talking about myself. I’m kind of an action guy. I want to go ... make a difference in my community.

But then again, like Swift, Taylor carries a team-first humility. He doesn’t want to hear how good he is or anything about Heisman or national Maxwell talk.

Like Swift, his focus is on winning, which the Badgers have done since Taylor arrived, going 15-1 in the 16 games he’s played for the No. 6 Badgers.

“Coming here, I wanted to show the coaches I could do the things they were asking me to do, and put what they’re telling me to do into action,” Taylor said. “I think I started to feel comfortable my very first game last year. I was in the first play of the season, I got into the huddle and offensive line told me, ‘Don’t worry about it J.T., we got your back.’

“They felt I had first-game nerves, but I felt no matter what was going to happen, we were going to do it together. That told me I was going to be okay. That game made me feel relaxed and play the game.”

Salem has always known about Taylor. He was a star there, and as he emerged with the Rams, South Jersey became more aware of Taylor. Gradually, the state found out about Taylor, and “Badger Nation” quickly became acquainted with Taylor. 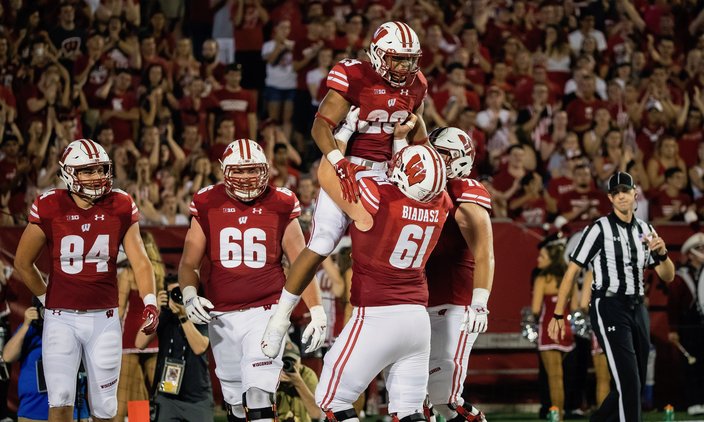 Wisconsin running back Jonathan Taylor is hoisted in the air by his teammates after a touchdown.

“Going through the different levels, moving on up, I felt it’s been a gradual growth, but my biggest priority has always been keeping a level head and staying humble,” said Taylor, who maintains a 3.5 GPA. “The media doesn’t really matter. That’s a byproduct of working hard, being coachable and remembering what got you where you are.

“The media stuff doesn’t affect you that much. I don’t like to read about myself. I stay off social media. Even back home, I didn’t like talking about myself. I’m kind of an action guy. I want to go back to Salem and go back to make a difference in my community.”

Taylor was also quick to note that Clement was and has been a huge influence on him. It was Clement who Taylor stayed with during his Wisconsin visit and it was No. 6, Clement’s high school number, that Taylor used to watch running through Salem the times Glassboro played the Rams.

“Watching Corey and seeing how he dominated, that’s where my love of the game grew and wanted me to be a better football player,” Taylor said. “We have a lot of talent from the [Philadelphia area], and it’s something people don’t realize nationally.

“There are a lot of small schools in the area that have talented players that are overlooked. College scouts need to look at the talent of the player, rather than the size of the team they play for.”

Taylor, the 2016 Henry Award winner, said his game needed to improve in recognizing blocking schemes, picking up running tracks and seeing the big picture before the snap than after the snap.

“Football is still strong in our area here, so kids are getting early exposure to some good teaching, but outside of that, there’s also individual coaching for quarterbacks, receivers, running backs, where you’re see kids getting trained up,” Wolpert said. “By the time they get to junior high school, they’re pretty well along. I would anticipate that you’ll continue to see the development of players like this.

“I wouldn’t say to the degree of D’Andre Swift and Jon Taylor, because they’re both special.”