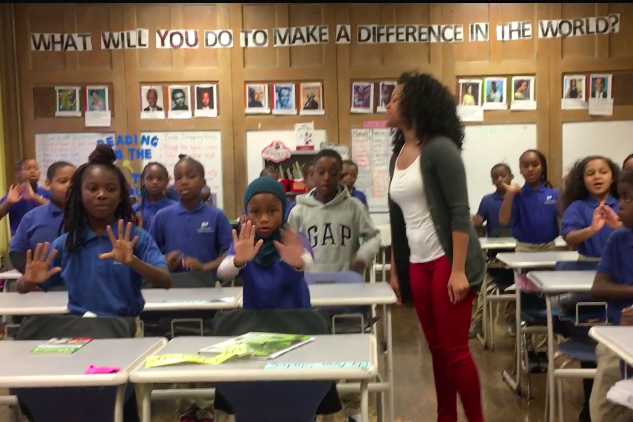 Jasmyn Wright, a third-grade teacher at Frederick Douglass Mastery Charter School in Philadelphia, inspires her students to "push through" barriers with this self-affirmation mantra.

In the video, posted Wednesday on Facebook by Jasmyn Wright, who teaches third grade at Frederick Douglass Mastery Charter School, the children can be seen and heard enthusiastically reciting a chant of "I'm going to push through" and "That ain't true" in response to her lead.

"What if it's too hard?" Wright asks the group while walking the classroom aisles.

"What if you're too black?" Wright goes on, to which the students say, "That ain't true."

In an interview with The Root, Wright said she shared the video on Facebook in response to the presidential election of Donald J.Trump, which had left some of her students "troubled" and "upset." The North Philadelphia school serves a student population that is 94.2 percent black.

When asked if she thought her students were too young to absorb the lesson, Wright told The Root: “They live in the same world that we do, they watch the same shows that we do, they listen to the same music, they hear the same news, and they are sponges and they soak things in. They’re also intelligent, so they can gain their own knowledge on issues.”