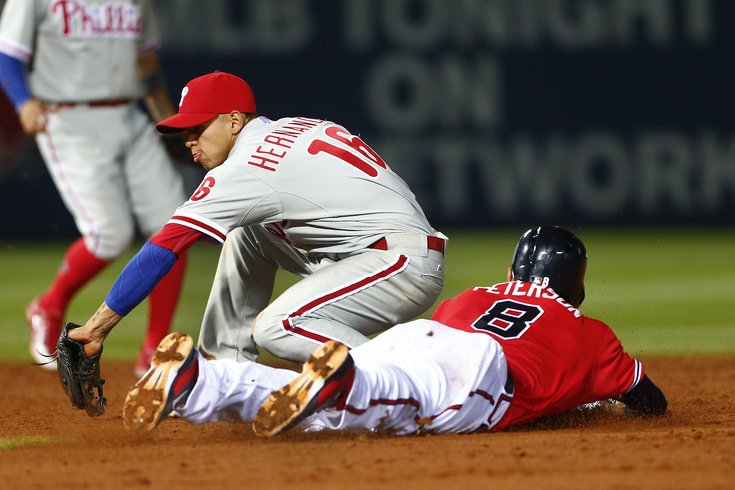 Cesar Hernandez, who has been filling in for Chase Utley, struck out Wednesday for the first time since April 15.

Phillies second baseman Chase Utley was out of the lineup again for their series finale in Atlanta, a 7-5 loss to the Braves. It was the second time in as many days that Utley sat against a right-handed pitcher, however his numbers against righties aren't much better* than vs. lefties.

#Phillies go for the series win in their rubber match vs. Braves at 7:10 ET. http://t.co/ibJDDiOQo6 pic.twitter.com/dw7GwnSZaL

And manager Ryne Sandberg must be really committed to giving Utley some rest, because in the bottom of the ninth inning, Darin Ruf came to the plate representing the tying run and Sandberg opted not to use the lefty as a pinch hitter, despite the fact that he has a .323 career average off the bench.

If Utley's issues are purely the result of bad luck, as Ruben Amaro and others have implied, then why not give him a shot?

Ruf was hitting .163 against right-handed pitching this season -- the Braves had veteran righty Jason Grilli on the mound -- and was already 0-for-4 in the game. Of course, Ruf put together a nice at-bat that ended with an RBI single, scoring Ben Revere from second.

I guess there's a reason I'm not a MLB manager.

In the end, Ruf's at-bat meant very little as Odubel Herrera followed with a game-ending strikeout, giving the Braves a 7-5 win to take the series.

With the team off on Thursday, it wouldn't be surprising to see Utley back in the lineup on Friday against Mets' ace Matt Harvey. Despite how impressive the young righty has been to this point in his career, Utley has great numbers against him. In 15 ABs vs. Harvey, Utley has six hits (.400) including a double and a home run, which he hit earlier this season at Citi Field. More impressive, however, is the fact that Harvey has never been able to strike him out.

On Tuesday, CSNPhilly's Jim Salisbury wrote more about why his early season struggles may be aided by an extended break:

Sandberg’s decision to give Utley a break came after the 36-year-old second baseman went hitless on Monday night to fall to .103 (9 for 87) on the season. That’s the lowest mark among 183 qualifying hitters in the majors. Utley’s struggles extend to last season. Since May 29, he is hitting .215.

To have watched Utley at the plate throughout the first few weeks of the season is to know he has hit plenty of balls hard with little to show for it. In sports, however, results matter and a lack of them can wound a player’s psyche. At some point, it’s best to step away and clear the mind before the struggles eat you up.  [csnphilly.com]

At some point, Sandberg needs to find the point at which time off stops being beneficial; when the daily routine of a 162-game grind begins to fade and skills begin to dull. I'm not suggesting that Utley is going to return from his hiatus looking like Eric Bruntlett, but any deviation from the norm -- especially in baseball where players are notorious for the sometimes OCD-like way in which they prepare -- can have a negative impact, even if it's hard to detect with the naked eye.

Often, the only way a player can break a slump is by hitting his way out of it, and you just read the reason why. For a veteran like Utley, a couple of days off can do wonders, both mentally and physically, but the longer this "mental break" continues, the less likely it is to have the impact Sandberg is hoping for.

Ryan Howard hit his 50th career home run, and fifth of the season, against the Braves on Wednesday night, nine more than his next closest opponent, the New York Mets. This one came against righty Mike Foltynewicz. Sure, he's played more games against teams like the Braves and Mets because their in the same division as the Phillies, but 50 home runs against the same team is impressive regardless.

Howard finished the night 3-for-4 with the home run and raised his season average from .195 to .220.

For video of his home run from Wednesday night's loss, click here.

Ben Revere, who was held hitless Tuesday night* for just the third time in his last 17 games, wasted no time getting back on track against the Braves on Wednesday. After going 4-for-5 in the 7-5 loss, Revere's raised his average to a season-high .264, up from .135 on April 16, which is when Revere's recent hot streak began.

*Don't worry, most of the Phillies failed to get a hit off Shelby Miller.

Three of Revere's four hits were doubles -- he now has five on the season -- and he added an RBI and a pair of runs scored.

Right now you may be wondering why it's worth noting that Phillies infielder Caesar Hernandez struck out against the Braves Wednesday night. And I don't blame you. I'd be wondering the same thing had the Phillies broadcast not shown a stat saying Hernandez hadn't struck out since April 15, going 35 plate appearances* between strikeouts. Naturally, he struck out twice after they showed the stat.

*Prior to its abrupt end in the second inning, his was the second-longest active streak in baseball behind only Braves shortstop Andrelton Simmons, who extended his streak to 40 plate appearances.

Part of that could be due to better plate discipline this season: