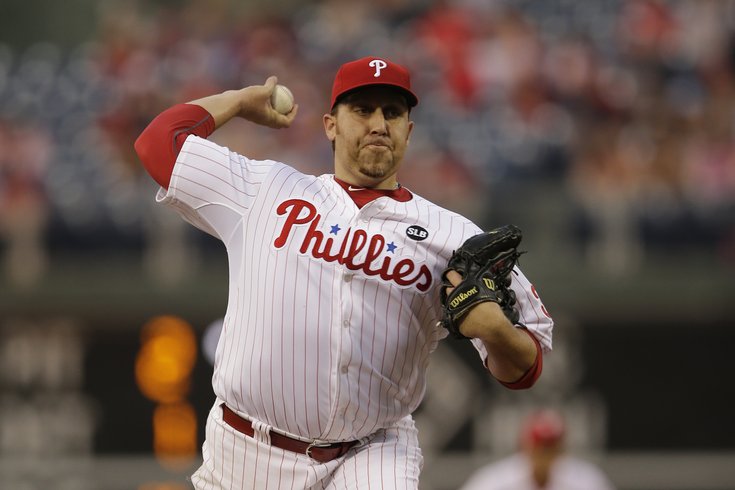 There's no way to sugarcoat it. Aaron Harang was awful Wednesday night, just as he has been for the last month-plus.

It's getting so bad for the 37-year old, that his poor performance could have a big impact on the Phillies' plans to rebuild this roster.

The Phillies have placed Harang on the 15-day DL with plantar fasciitis in his left foot and recalled Chad Billingsley.]

In their 9-5 loss to the Brewers, Harang pitched just five innings and allowed eight runs on a career-high 14 hits -- three of which came off the bat of Milwaukee's starter, Kyle Lohse.

The eight earned runs scored by the Brewers are the most Harang's allowed since last June*, when he was with the Braves, and are one shy of his career-worst of nine, which also came last season.

*His opponent that night? The Phillies.

Boasting a 1.82 ERA follow his start on May 19, Harang has seemingly struggled more and more with each consecutive start. In his eight starts since then, he is 0-8 with a staggering 7.01 ERA and has seen his season record fall to 4-11.

With this latest loss to the Brewers, Harang's ERA is up to 4.08 on the season.

Earlier in the day, interim manager Pete Mackanin said it's "probable" that staff ace Cole Hamels is dealt before the July 31 trade deadline.

The same can no longer be said about Harang.

If they were smart, the Phillies would have traded him in May, immediately on the heels of his hot start. It was only a matter of time before Harang regressed to the mean, although I doubt many saw it getting this ugly.

At least then, the team could have expected a decent return. Now, not only is Harang pitching poorly, but it's been getting progressively worse. There's just no end in site.

For a guy his age, a gradual drop-off is to be expected as the season progresses. Fatigue sets in and the probability of injury increases -- not to mention the daily aches and pains that come with getting older.

But the 14-year vet said after the game that he feels as healthy as ever.

Even if he is feeling as good as he says he does, the right move was to deal him -- assuming that's the ultimate goal -- when his value was the highest. Yes, he was giving the Phillies a chance to win every fifth game, but do those wins really count for anything? [The answer is no.]

And with a 1.82 ERA on May 20th, even Harang's family would have admitted that it probably wasn't going to get any better than that.

I wrote a a few weeks back that Amaro didn't need to rush into trading his top two starters -- more so Hamels than Harang -- because a few bad starts wouldn't completely diminish their trade value. And I stand by that.

What is happening now, however, goes well beyond a few bad starts. The damage is becoming irreversible and come July 31, there won't be a long line of GMs trying to acquire Harang.

That line is getting shorter -- and the potential haul getting weaker -- with each start.