The team's three-game set in San Francisco will only be available to watch on Peacock, NBCUniversal's streaming service 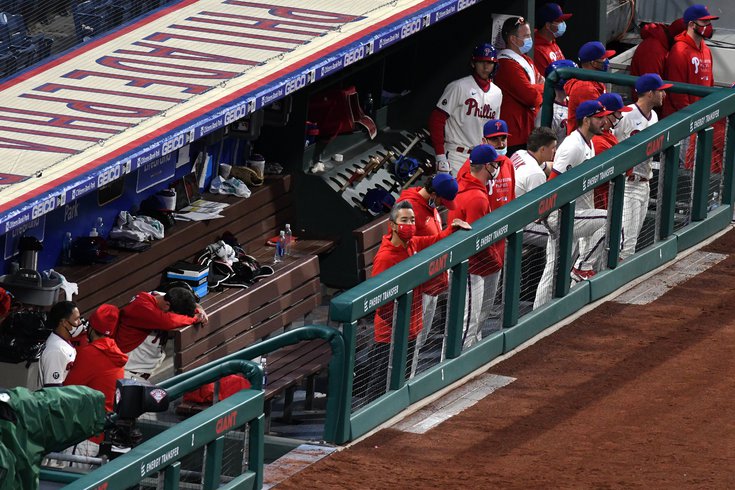 The Phillies will not be available locally on NBC Sports Philadelphia or NBC10 when the team faces the San Francisco Giants this weekend.

Sons and daughters throughout the Philly region might be spending some of their Father's Day weekend helping their dads find the Phillies games on television.

When the team travels to San Francisco this weekend to face the Giants in a three-game series and close out its West Coast trip, none of the games will be available locally on NBC Sports Philadelphia or NBC10.

Instead, the entire series at Oracle Park will be available exclusively (for free) on Peacock, NBCUniversal's streaming service. That's correct — not a single Phillies game will be available this weekend on traditional linear television.

While the medium through which the game is watched might be different, some of the faces in the broadcast booth will be familiar ones to Phillies fans.

Legendary play-by-play broadcaster Jon Miller, who famously worked on ESPN's Sunday Night Baseball for many years, will lead the weekend telecast. Mike Krukow, one of Miller's broadcast partners in San Francisco, will be in the booth as well.

The broadcast is also expected to have special features and guest contributors. Pregame coverage will be available on Peacock before the first pitch of all three games.

The Peacock-exclusive broadcast this weekend will be the first time that the Phillies will not be available to watch on a broadcast or cable television network for an entire series.

The decision to make Phillies-Giants available exclusively on Peacock this weekend is not surprising for a number of reasons. First and foremost, the Phillies and Giants are two of the four MLB teams that currently have local television contracts with the NBC Sports Regional Networks. It's understandable that NBCUniversal would want to roll out this initiative with two franchises that are in business with the company's regional sports networks.

The Peacock-exclusive broadcast is among the latest efforts taken by MLB to expand game-watching options for fans across various digital and streaming platforms in order to make the experience more accessible to cord-cutters.

Last month, the Phillies played a day game against the Marlins in Miami that was only available to watch on YouTube. It's one of 12 MLB games that have been streamed for free on YouTube over the past year. The league also simulcasts a large number of regular season games on ESPN+.

But while it may be unforeseen right now, a streaming-exclusive three-game series is very much a sign of what's to come in the near future as the sports and streaming worlds continue to collide.

That ongoing collision may not be more prevalent anywhere else than at NBCUniversal, which continues to aggressively expand its live sports offerings on Peacock and move away from traditional broadcast models.

NBCSN, NBC Sports' national cable television network, will cease operations by the end of 2021, prompting much of the corporation's sports content to shift over to Peacock.

A shut down of the national sports network will also certainly call into question the future of regional sports networks like NBC Sports Philadelphia, which have recently undergone significant cutbacks. And if this weekend's experiment goes well, who would rule out the possibility of Peacock eventually airing more Phillies games in the not-so-distant future?

Now, Peacock has become a treasure-trove for many viewers, as the streaming service's live sports offerings continue to grow.

Peacock offered exclusive live coverage of the recently-finished French Open and will replicate those offerings when golf's U.S. Open gets underway this weekend. The streaming service is also expected to play a key role in NBC Sports' wraparound coverage of the Olympics this summer in Tokyo, Japan.

Other sports like IndyCar racing, motocross, lacrosse, track & field, cycling and rugby are also available to stream on Peacock too.

But the sport where streaming services like Peacock are expanding at perhaps their fastest pace is football.

Starting in 2023, Amazon Prime Video, ESPN+, Paramount+ and Peacock will all play integral parts in broadcasting NFL games over the next decade. Peacock will eventually begin simulcasting all of NBC's Sunday Night Football games and carry one streaming-exclusive game per season through 2028.

Broadcasting an entire three-game series on a streaming service could very well be just another step towards a day when Phillies games, and sporting events in general, are not predominantly aired on traditional television platforms.

More information on how to access Peacock can be found on the streaming service's website. Peacock offers viewers three levels of service; an ad-supported free version that consists of a limited library of content, an ad-supported premium tier that offers Peacock's full library for $4.99 and an ad-free package that provides all of Peacock's content for $9.99.

Peacock's ad-supported premium version is automatically available at no additional cost to Xfinity Flex and X1 customers. The streaming service can also be accessed from most devices.

Make sure you have all that down for when your parents call you on Friday night wondering why they can't find the Phillies game on TV.