Who won the week in Philly sports: Rhys Hoskins' bat spike goes down in history 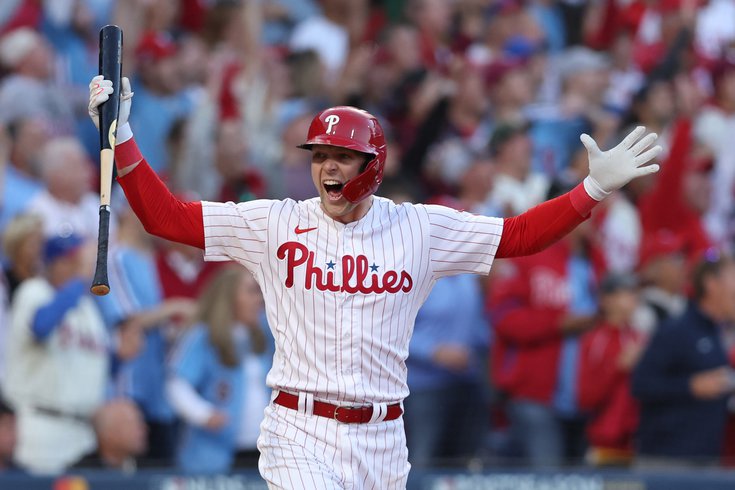 Rhys Hoskins blasts a three-run homer into the stands in Game 3 of the NLDS.

Never in the brief history of the "Who won the week in Philly sports" feature has there been such stiff competition. The Sixers, Flyers and Union have their own respective buzz, but nothing compares to the way both the Phillies and the Eagles have a stranglehold over the city right now. The Eagles have started 6-0 for the third time ever (2004 and 1981). They just took down the Cowboys on Sunday Night Football. And the Phils? It's a Red October for the ages already.

I could give this award to a ton of people right now. Nick Sirianni, Rob Thomson, Aaron Nola, Bryce Harper, Chauncey Gardner-Johnson, Jalen Hurts and more would all be deserving most weeks. The one singular moment that will define this exhilarating Philly sports run, however, is Rhys Hoskins completely redeeming himself, crushing a three-run bomb and spiking his bat with the force of the Hulk.

I was at Citizens Bank Park for Game 5 of the 2008 World Series (both parts). I was there for Roy Halladay's playoff no-hitter in 2010. On Friday down in South Philly, I've never heard that stadium louder than it was after Rhys Hoskins' home run. Other than Patrick Robinson's iconic Pick-6 scurry at Lincoln Financial Field in the 2017 NFC Championship Game, I've never heard a Philly crowd in more of a frenzy.

Even if the Phillies fall in the NLCS or World Series, that game and the whole NLDS win will stand as a huge moment for the organization, a time when the Phillies were truly back in this town and they knocked off the defending champions. For a generation of Phils fans starved for any semblance of playoff baseball, this is all they could've happened hoped for.

You're not dreaming, Philadelphia. This is the reality we currently have inhabit where this insane city has become the nexus of the sports world.

More on my rationale for choosing to go with Rhys Lightning...

The Spike Heard 'Round the World 💪

You have watched this highlight 100 time already assuredly, but here it is again:

Still thinking about this pic.twitter.com/pLdd2PAMqL

We've seen bat flips. We've seen guys gallop around the bases after a huge homer. I can't recall ever seeing a guy spike a baseball bat like he was an eligible offensive lineman who just caught his first ever touchdown and threw a football into the turf.

That's a monster Philly sports moment. It goes down in history. "Where were you when Hoskins spiked the bat?" will be a question that will fill barroom discusses and group chat BSing sessions until the end of days.

For sports fans out there, this is exactly the moment you hope to see at some point in your life. Philly was treated to a whole weekend of it. Incredible.

Shane Victorino threw out the first pitch before the Phils' NLDS Game 3. Victorino's summit as a Phillie came when he hit a grand slam in Game 2 of the 2008 NLDS off C.C. Sabbathia. I was not at CBP that day, so I can't speak to how loud the crowd was, but it'd have to be pretty similar to the reception toward Hoskins' blast. That Victorino homer stood as the "Wow, they can actually go on a run and win this whole dang thing" moment for the 2008 World F-----g Champs squad. Hoskins' homer is similar in that if anyone thought this team was the same old Phillies, that feeling of pessimism went away with one mighty bat spike.

As of right now, I'd have Hoskins' homer as the third biggest I've seen in my time following the team, behind Matt Stairs ripping one "into the night" and Victorino's grand salami.

Hoskins incurred the wrath of the fan base with a Game 2 gaff against the Braves, the team's lone loss in the postseason so far. Well, he made everyone forget that, forget all of his nuclear winter cold streaks that have popped up through his career and then hit the biggest homer for this team in almost 15 years. Philly loves a bounce-back, underdog-style story. Hoskins' 18-home run rookie campaign in 2017 likely brought too high expectations for him that would hard to match, but the postseason is where players can rewrite the narratives that have followed them. With one swing of the pat, Hoskins did just that.

To put this into perspective, this would be like if the Phillies were in the NLCS and the Eagles were 6-0

If you're from Philly, could anything be better than this?