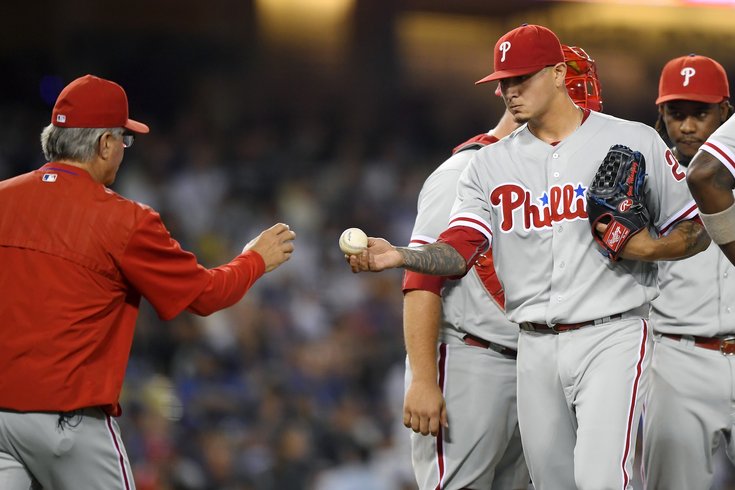 The results of Vince Velasquez's MRI were encouraging: the 24-year-old right-hander has a Grade 1 flexor strain and should rejoin the rotation before the All-Star break.

The Phillies put a nightmarish month in their rearview mirror when they returned to Citizens Bank Park on Friday and began June with a bit of promising news: Vince Velasquez’s elbow injury won’t sideline him for very long.

An MRI on Velasquez’s ailing arm confirmed the initial diagnosis, that Velasquez has a Grade 1 mild flexor strain, general manager Matt Klentak said before his struggling team took pregame batting practice prior to the start of a three-game series with the San Francisco Giants.

“It’s about as good of news as we could have hoped for,” Klentak said.

So how long will Velasquez (currently on the 10-day DL) be sidelined? Well, it will still be longer than missing just one or two turns in the starting rotation.

Klentak said Velasquez will be shut down “for a couple of weeks” in order to let the inflammation die down. If Velasquez is down for two weeks and then begins a throwing program in, say, mid-June, with a couple of rehab starts mixed in, he could return in early July before the All-Star break without any setbacks.

Lively, 25, jumps into the rotation spot vacated by right-hander Zach Eflin, who was demoted to Triple-A Lehigh Valley over Memorial Day weekend. Lively was 6-1 with a 2.40 ERA, a 0.941 WHIP, 45 strikeouts and seven walks in nine games/56 1/3 innings at Triple-A. Acquired in the December 2014 trade that sent Marlon Byrd to the Cincinnati Reds, Lively was honored with the prestigious Paul Owens Award as the top pitcher in the Phillies’ minor league system in 2016, when he went 18-5 with a 2.69 ERA in 28 starts between Triple-A and Double-A Reading.

“What I hope is he comes up and does exactly what he’s been doing at Triple-A,” Klentak said. “He competes his butt off on the mound, he throws a lot of strikes, he’s got a real good feel on the mound. He demonstrated that to us last year as well as the early parts of this year. I really what we hope is he doesn’t change a darn thing because what he’s been doing has been pretty good.”

The Phillies will need another starter on Monday, when Velasquez's turn in the rotation comes around. Nick Pivetta or Zach Eflin could be candidates to return, but one other option: right-hander Thomas Eshelman. The 22-year-old Eshelman, acquired in the Ken Giles' trade, is 3-0 with a 1.40 ERA in five starts since an early-season promotion to Triple-A Lehigh Valley.

The only possible hurdle: Eshelman is not on the 40-man roster.

Stand By Your Man

Maikel Franco, who entered the Phillies first game in June hitting .216, was penciled into the fifth spot on Pete Mackanin’s order.

Although there has been talk of sending Franco to Triple-A to get his offensive struggles sorted out, Klentak repeated on Friday what he said earlier this week in Miami: his slugging third baseman will be given every opportunity to get on track in the Phillies lineup, not as a demoted member of the IronPigs. But how long is that leash, if say, Franco’s struggles persist into mid-June?

“We’re not rigid in the length of any players’ leash,” Klentak said. “We always have to be open to changing our minds, but what I said the other day in Miami remains the case today and I expect it to remain the case for a little while: we want to continue to show confidence in Maikel, that he can bust out of this. Number one, we’ve seen it before. He can get on hot streaks where he can carry a club through an extended stretch of time. We’ve seen that through flashes over the last few years.

“And number two, there are some reasons to believe that he’s been the victim of some poor luck. And that’s not the extent of it, I’m not trying to blame bad luck on this entirely, that’s now what I’m doing. But, his walk rate has improved, his strikeout rate has improved, he still hits the ball hard. The only way to cure that right now is to keep running him out there and letting the batted balls take care of themselves. We have confidence in him and we’re going to continue to show it. As far as how long that leash is, that’s never something we’re going to project too far in advance.”

Entering Friday, Franco’s .625 OPS ranked 162nd out of 173 qualifying major league hitters. The only player with a lower OPS on the Phillies roster, Odubel Herrera (.589), was not in Friday’s lineup …. but he wasn’t being benched, either.

Herrera, who was benched earlier this week, is instead out of Friday’s lineup because manager Pete Mackanin said he plans to run a regular rotation now that he has four healthy outfielders with Howie Kendrick back from the disabled list. Still, expect Mackanin to play the hot hands more often (translation: a struggling Herrera is more likely to sit then, say, Aaron Altherr).

This Sunday will mark four full weeks since Sixto Sanchez pitched in a game. Sanchez, the top pitching prospect in the Phillies farm system, last started a game at Low-A Lakewood on May 7.

But the 18-year-old Sanchez (neck stiffness) should be back with the BlueClaws within the next 10 days or so.

Klentak said Sanchez threw three innings in an extended spring training game in Clearwater this week with his fastball hovering in his usual 97-100 MPH range. He is expected to throw at least once more in Clearwater before rejoining Lakewood’s formidable rotation.