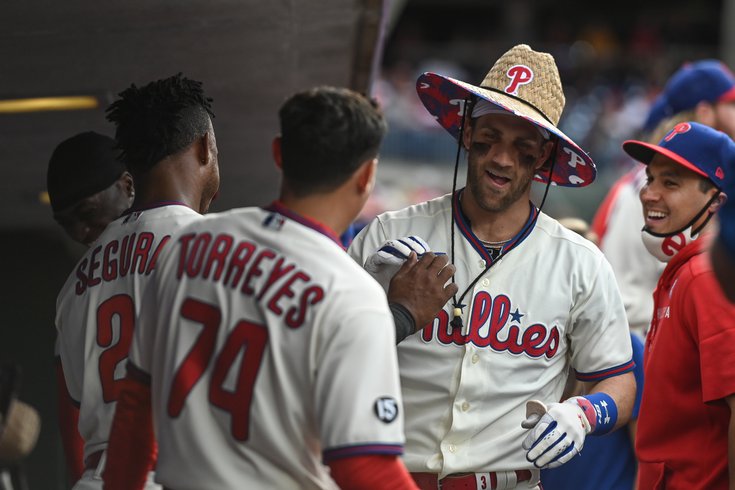 Bryce Harper has six more games to carry the Phillies across the finish line and into the playoffs for the first time in a decade.

It really can't be overstated how terrible Sunday was for the Phillies and their playoff hopes.

Entering the day trailing the Braves by 1.5 games and looking to sweep the Pirates, the Phils were blanked, and the Braves handled the Padres out west — putting Philly 2.5 games behind with six to play.

But there is still a chance.

On paper, closing that gap sounds doable, but in reality, the margin for error is basically non existent.

With Monday off to rest up for a final push, the Phillies will travel to Atlanta for a trio of games that will all but decide the NL East on Tuesday. With their playoff odds plummeting from 25% to 7% in just a few days according to FiveThirtyEight.com, the Phillies need to take advantage of their pitching rotation aligning perfectly for these three games.

Any outcome is possible, from being in the lead in the NL East (with a sweep of the Braves), to closing the gap to 1.5 games (if they take two of three), to having their season on the brink of being ended.

First, though, we have a weird scheduling scenario. Due to a postponement of a recent game against the Rockies due to rain, the Braves have played one fewer game than the Phillies have. If the Phillies find themselves .5 games behind the Braves at the end of their season finale on Oct 3, the Braves will have to fly back to Denver to play the Rockies in a makeup game which would determine if a one-game playoff would be needed a day or two later to decide the NL East.

That situation also could come into play if the Phillies find themselves ahead by .5 games, and the Braves would then be playing to force that one-game playoff.

But we'll get to that if/when we have to. For now, here's a look at how the Phillies have fared against Atlanta so far this year:

Lets look at the matchups for the most important series the Phillies will play this season:

The Phillies have their ace on the hill to open things, and with the way the schedule lines up he'll have one more start against the Marlins next weekend. Morton is a name known well to Phillies fans and to the Phillies, as he had a stint with the club before bopping around to a bevy of other teams. FiveThirtyEight.com — which predicts a Braves sweep — gives Morton the edge and Atlanta a 58% chance of victory. Sportsbooks are on Atlanta's side too, despite their lack of a real home field advantage with some outlets having the Braves as 1.5-run favorites, with a -196 line.

Atlanta will come back with their ace on the mound for Game 2, as Aaron Nola looks to add a solid September start to a resume that has been lacking them in recent seasons. The Phils appear to be even bigger underdogs in this one, with just a 38% chance of victory via FiveThirtyEight's prediction engine.

The Phillies' trade deadline acquisition can validate the entire trade by winning his final start of the season, going up against Anderson, who has been a solid starter for the Braves all year long. And yes you guessed it, the Phils are underdogs in this one too.

Following these three games, even if the Phillies get swept, they'll technically be alive but will need a miracle — sweep the Marlins with the Braves losing all three of their games against the Mets plus the above mentioned makeup game against the Rockies.

But for now, they hold the keys to their own fate. Beat the Braves and they're in the driver's seat. Fall short, and extend their playoff absence to 11 straight seasons.