5 awards from the Phillies' series loss to the Dodgers 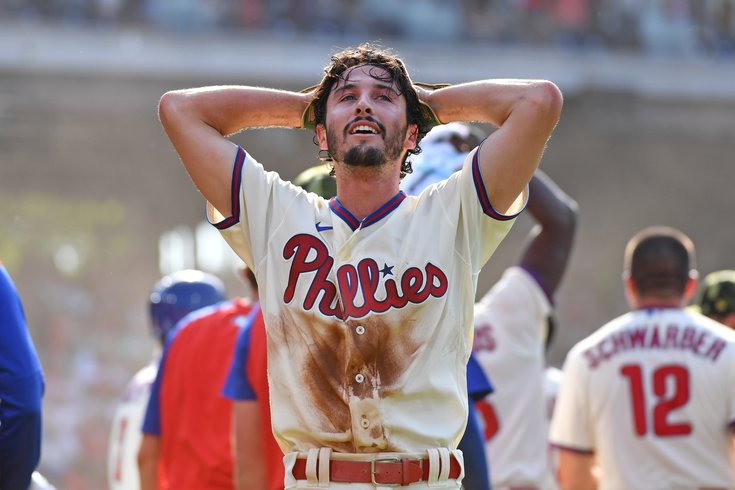 Garrett Stubs scores the game-winning run for the Phillies.

Nothing lasts. The Phillies built goodwill when they shocked their fan base following a 3-out-of-4 performance against the Dodgers last weekend in L.A. That same Dodgers squad, one that now sports the best record in the National League, came to South Philly this past weekend and proved the Phils to be the mediocre squad they are. The Dodgers took two of three from them.

The Phillies now sit at 19-22, eight games out of first in the NL East and 3.5 games out of the second wild card spot. Morale is low and apathy is high.

As I do, I'll give a quick series recap and hand out five awards from yet another forgettable series in the saga of the post-2011 Phillies...

• The Phils had a stroke of luck Sunday afternoon, coming back from being down 3-2 to winning 4-3 on a game-ending error from Dodgers second baseball Max Muncy.

Muncy, a two-time All-Star lost the game for the Dodgers on Sunday on this massive whiff:

The Phillies walk it off on an error by Max Muncy! pic.twitter.com/3InleYTWAW

It looked like me when my dad mistakenly put me in the infield while coaching my Little League team.

The Phillies were thoroughly outplayed all series against the Dodgers. They were gifted a win they didn't deserve in the final tilt. That can be a moment of resilience for this club, a rallying point that could shuttle the squad towards contention. As has been seen countless times over the last few seasons, however, the Phillies aren't a franchise that goes up and grabs things when presented with a clear opportunity. So it goes.

How'd They Shut Down That Guy Award: Freddie Freeman 🤷

In 201 career games against the Phillies, Dodgers first baseman has hit .293 with an on-base percentage of .394 and a slugging percentage of .482 with 30 homers. Phillies fans were certainly relieved to see Freeman leave Atlanta for Los Angeles this past offseason, not needing to deal with him constantly raking against the Phils inside the division.

Against all odds in this three-game set in South Philly, Freeman went 3-for-15 at the plate. As Bruce Banner would say, "I see this as an absolute win!"

The Phillies' season series against the Dodgers is over with them improbably taking four of those seven games. In 34 plate appearances across those seven games, Freeman hit .172 with an unfathomably bad OPS of .467. I don't get it. It makes zero sense. If the Phillies somehow end up playing the Dodgers in October, expect Freeman to hit like 2012 Miguel Cabrera.

Is the hot streak finally happening for Schwarber? He's been batting below the Mendoza Line this season, but he was cooking against L.A. In 13 plate appearances across three games, Schwarbs had an OPS of 1.235, had a hit in every game and went yard once. His batting average has now raised to .203 (lol), but when the dude makes contact (hint: not frequent enough) he rips the dang thing.

Odubel Herrera went 1-for-9 at the plate. His on-base percentage had dropped to a putrid .270, a career low. It's great that a guy like this keeps getting chances in the major leagues!

Bryce Harper hadn't played in almost a week when he returned to the Phils' lineup on Saturday. He had missed time following a "platelet-rich plasma" injection his right elbow given his continuing UCL injury. That's kept Harper out of his usual spot in right field since April, but he'd been mashing the ball at the plate despite that rough injury and being relegated to designated hitter duty.

In the two games he suited up for against the Dodgers, Harper went 1-for-8. No cause for concern, but it remains to be seen how this injury will affect Harper for the remainder of 2022 (and beyond) despite the success he's had in the batter's box while dealing with it.

Familiarity brings contempt. The Phils will have seven games in seven days against NL East rivals beginning Monday night in Atlanta. That four-game series will be followed by three games in Queens against the Mets this upcoming weekend. Zack Wheeler and his 3.49 ERA is scheduled to be on the mound against Tucker Davidson.