Impressionist John Di Domenico will be busy through the presidential election – and beyond?

Impressionist John Di Domenico, a native of Ambler, Montgomery County, has done Donald Trump for more than 10 years. For the foreseeable future, as the November presidential election approaches, Trump is his full-time job, with numerous weekly appearances.

It takes John Di Domenico 90 minutes to become Donald Trump. The writer and impersonator has been playing the real estate mogul for more than 10 years, and he’s been doing other characters for even longer. In 1999, he even performed at Trump’s 55th birthday party, leaping out of an enormous cake dressed as Austin Powers and flanked by 12 models on each side.

Physically Di Domenico looks more like Mike Myers — indeed when he performs as Powers the effect is eerily exact — but the perfection of his cadence and pitch as Trump is what’s given him one of the busiest years of his career. The Philly-area native has been toiling in the trenches of show business for decades, working in New York on the small screen, in ads, and off-off Broadway as well as on stages and conference rooms all over the world.

“I feel like Rocky. Here I am 53 years old and I’m finally getting a break. I can’t take a vacation." – John Di Domenico, Trump impressionist and Ambler native

Work was steady before this election cycle, but the year of Trump has been exceptionally good to Di Domenico. He appears in every installment of Slate’s "Trumpcast," a weekly audio series on The Donald and the threat he poses to democracy. But Di Domenico is ecumenical when it comes to political views on Trump, and tries hard to obscure his own leaning. He’s also a regular on Fox News’ "Redeye" morning program, and enjoys numerus bookings on, among others, "Conan O’Brien", "Fox and Friends," and "Inside Edition." The requests for appearances at conferences are near endless.

“I feel like Rocky. Here I am 53 years old and I’m finally getting a break,” says Di Domenico. “I can’t take a vacation. Although who knows, after the election the demand may be even higher. It could go either way. Even if he loses, the man will still be there.”

For the foreseeable future, Trump is his full time job, with numerous appearances scheduled every week. He tries to break up engagements with a day or two at home in Las Vegas (where he moved from South Jersey five years ago).

Di Domenico is a native of Ambler, a small Montgomery county municipality to the northwest of Philadelphia. His father worked at Standard Press Steel in Jenkintown and his mother was a part-time waitress and hostess. Their neighborhood, in his telling, looked as if “someone pulled eight blocks out of South Philly and dumped them in Ambler – just rowhomes, rowhomes, rowhomes.”

In the late 1960s and early 1970s, few of his neighbors could afford air conditioning, so in the summer everyone would hang out on their two-step stoops. Di Domenico took advantage of this captive audience, and imitated what he’d seen on Ed Sullivan that night for the semi-attentive masses. At the time he had a speech impediment, and he combatted the issue by hamming it up in the street.

Di Domenico transferred to Temple in undergrad during the mid-1980s, where he lived on campus in an oft-burglarized fraternity house and interned for Republican U.S. Senator Arlen Specter. He became interested in politics through the standup routines of George Carlin and, especially, David Frye, a political impersonator who is little known today. (A few of his routines are available on YouTube.) Frye made a name for himself in much the same way Di Domenico is today: by employing a spot-on impression of Nixon during his greatest victory in the 1972 election, and his greatest defeat shortly thereafter.

After college Di Domenico worked for an ad agency in Philadelphia and acted in plays at the Society Hill Playhouse, took classes at the Walnut Street Theater, and then got a year-long gig in Atlantic City. Over the years his career turned increasingly to impersonations, which are a lucrative market for those with the talent and connections to get hooked into the corporate circuit. (They are also much more consistent than constantly hunting down new acting gigs.) In addition to Trump, his website includes links to 38 other characters he can be hired to perform, from Albert Einstein to Groucho Marx to Captain Jack Sparrow.

A CAMPAIGN TO REMEMBER

In 2004, the year "The Apprentice" debuted, bookers began asking Di Domenico if he could do Trump. He picked up the freshly released DVD edition of the first season at Barnes and Noble and binged all 15 episodes back-to-back in less than 48 hours. All the while, he took notes and broke Trump’s voice down by throat placement, nasal placement, trying to nail down exactly where the billionaire's actual vocal production was coming from. He noted that Trump’s nasally voice is unusual for such a big man — Trump is about 6-foot-3 and probably about 200 pounds—and perhaps it would be if he were speaking from his chest.

“He’s a big guy, but he doesn’t really have a chesty sound because he’s reproducing the words right in front of his lips,” said Di Domenico. “He’s always pursing his lips. He doesn’t open his mouth as an actor does, or someone who has been trained to speak. In speech therapy I learned to speak correctly by studying vocal production. My therapist used to hold my face and make me do fish lips to do pronunciation. That was sort of a precursor to doing Trump.” 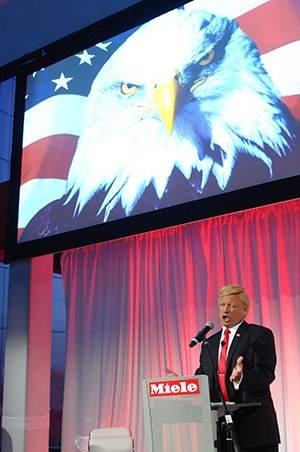 Besides the brash arrogance and swaggering demeanor, Di Domenico also needed to do something about the celebrity tycoon’s most famous physical feature. The wigs cost up to $4,000 and are woven of real human hair and hand-pulled into place. His first Trump wig came from a friend who’d worked on a 2003 Visa ad that featured the businessman diving into a dumpster to retrieve a lost credit card, which naturally required an extra in a Trump-style hairdo to do the actual garbage rummaging. That first one lasted 10 years, but now that Di Domenico is doing all Trump all the time he’s had two backups made and a third is in production. (They have to be regularly cleaned, like an actual head of hair.)

Di Domenico’s only real interaction with the candidate came when he performed as Austin Powers at Trump’s 55th birthday party. He arrived at the celebrity-studded event early (the cast of "The Sopranos" was there, minus Edie Falco and James Gandolfini), and the prep team peppered him with reminders to skip shaking the hand of the notoriously germophobic birthday boy.

“Then he sees me in the blue Austin Powers suit and his eyes light up,” says Di Domenico, who was seated on a couch when the tycoon entered the room. “He walks over to me, he’s looming over me and puts his hand in my face — and by the way these are very, very big hands, huge hands — and says ‘I’m Donald Trump.’ Well, my arms are at my sides because I was instructed by three people to not touch him. Then it was like something out of a commercial, and all three of them leaned in and said [simultaneously] ‘Shake his hand, shake his hand, shake his hand.’”

For now, Di Domenico is enjoying the fruits of the campaign season. He’s already on track for his best year ever. He’s even heard directly from the Trump campaign. Apparently The Donald is a fan of Di Domenico’s work and has watched all the videos on the website. Trump is a very obliging subject in many ways other ways, not least in that he is perpetually offering some new over-the-top proclamation that can become grist for the comedian’s mill.

“I’ve always been a fan of his, I was just fascinated by the guy, I don’t know why,” says Di Domenico. “But being in Philadelphia, the son of a steelworker, he seemed like this Horatio Alger, this guy in New York with his name on everything.

"My ex-wife got "The Art of the Deal" for me as a present. I still have it and her inscription: ‘I don’t like this guy, but I know you wanted this book for Christmas.’ ”