Machine Shop, a French-inspired boulangerie, opened in the Bok Building earlier this year 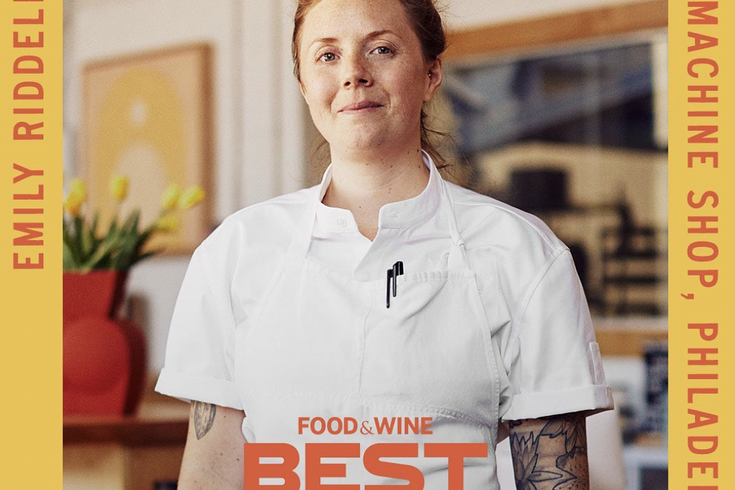 Chef Emily Riddell, 36, opened Machine Shop on the ground floor of the Bok Building in South Philadelphia earlier this year. She's been named one of Food & Wine's Best New Chefs in 2022.

Six years ago, Emily Riddell founded a bakery with former co-owner Katie Lynch, selling pastries wholesale to popular Philadelphia coffee shops with a goal of one day opening a place of her own.

The COVID-19 pandemic put those plans in serious jeopardy, forcing Riddell and Lynch to switch to a pop-up model in order to keep their momentum going after their regular accounts were suddenly canceled. Then Lynch decided that the goal of opening a retail shop wasn't what she ultimately wanted to do, and Riddell went solo.

MORE: Grab drinks with a zombified Gritty at a Halloween pop-up bar in Midtown Village

Nine months after opening Machine Shop, her French-inspired bakery on the first floor of the Bok Building in South Philadelphia, Riddell has been named one of Food & Wine's Best New Chefs in the United States.

Riddell, 36, is a veteran of the Philadelphia restaurant industry who has worked under Stephen Starr and at the former Le Bec Fin, along with other jobs in California. She had been at Lancaster's Barberet Bistro & Bakery in the year leading up to the opening of Machine Shop.

She planned her business out at the former technical school building on South Ninth Street, coming full circle to the place where the wholesale business had a kitchen on the fourth floor. She's now got twice the amount of space she had previously.

Food & Wine selects its Best New Chefs over a period of months, with nominations taken from food writers, cookbook authors, Best New Chef alums and other trusted experts around the country. Restaurant Editor Khushbu Shah then travels the country, dining out anonymously in order to choose the annual award winners.

In January, prior to the opening of Machine Shop, Riddell told Eater Philly that the historic Bok Building space used to be a series of auto body workshops and classrooms for the vocational school. The building has undergone a revival in the years since the school was closed in 2013, filling out out the former classrooms with creative businesses and start-ups. The eighth floor is occupied by Irwin's Upstairs, the Sicilian restaurant that was named one of the best new restaurants in the country last week by Bon Appétit.

Here's what Food & Wine's Shah had to say about Riddell:

There are few perfect croissants in the world, yet I found one in Philadelphia at Machine Shop, the boulangerie and bakery run by pastry chef Emily Riddell. As I sliced through the golden pastry at its most bulbous point, flaky shards flew in every direction, a hurricane of crisped dough shattering across the table. The cross section revealed dramatically spacious air pockets, with enough lift between the tender layers that one could almost mistake each bubble for a cozy studio apartment.

Riddell is a lamination savant, who can predict exactly how butter is going to react with flour at any given point. For evidence, just take a peek inside the pastry case that anchors the bakery, where a deeply savory shakshuka-inspired Danish laced with pepper jam gently coddles a soft-cooked egg, and a supremely flaky spicy-greens croissant is skirted with melted cheese — Riddell's vegetarian-friendly answer to a classic ham-and-cheese croissant. (Riddell herself is vegetarian.) There's the chewy, spicy ginger cookie crafted from three forms of ginger (ginger juice, ground ginger, and crystallized ginger) and a lemon tart made with a tangy white chocolate–spiked cream, graced with a sharp swoop of torched Italian meringue. Behind the counter, the back shelf displays loaves of bouncy onion focaccia and generously seeded loaves of rye, in case you need a few more carbohydrates to take home.

Take a look at some of Riddell's handiwork at Machine Shop.

Riddell's recognition by Food & Wine puts her in the company of a long line of Philadelphia chefs who have earned the distinction, most recently former K'Far and Zahav pastry chef Camille Cogswell (who's soon opening a bakery in North Carolina) in 2020 and former Fork executive chef Eli Kulp in 2014.

Machine Shop is open Thursday through Sunday from 9 a.m. to 2 p.m. at 1901 S. Ninth Street, with an entrance via Dudley Street.