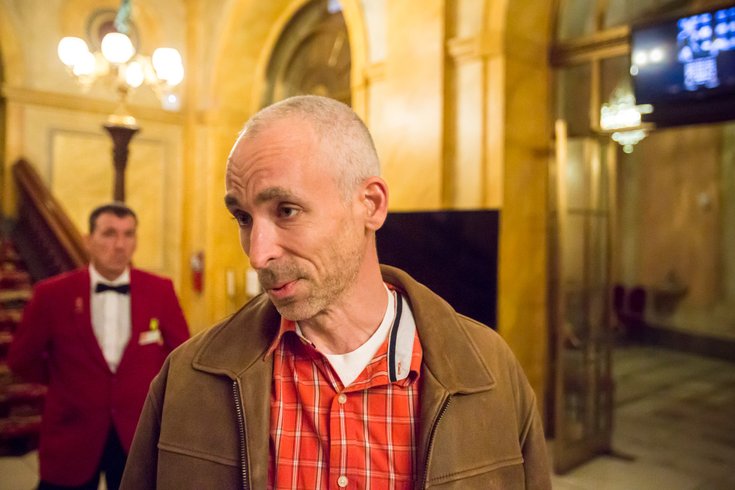 On Thursday night, Howard Caplan got what he’d long wanted: A chance for Hillary Clinton to hear him yelling about “Pizzagate.”

At the same time the crowd of some 2,700 people who packed the Academy of Music in Center City to hear Clinton discuss her 2016 election memoir – “What Happened” – got what it wanted: A chance to see the woman they think should’ve been president shut down a man who rudely interrupted her.

Those were some of the things audience members yelled at one Howard Caplan – aka the Roosevelt Boulevard “Hillary 4 Prison” signman – who went from a local curiosity to the focus of wider interest with his disruptive actions.

Caplan – per video posted to Twitter – carried on about Pizzagate before he was asked to leave the ticketed event.

Multiple videos were posted to Twitter regarding the exchange.

Philly and @HillaryClinton were having none of this asshole tonight #pizzagate #HillaryClinton #philly #whathappened pic.twitter.com/iuezuhhzKs

In any event, some of those in the audience might be familiar with Caplan’s exploits of the past year or so, but for those just hearing of him now because of this confrontation, here’s a bit of a recap.

The 48-year-old Northeast Philadelphia man identified as a “life-long Democrat,” but started heading out to Roosevelt Boulevard and Grant Avenue during the 2016 general election toting a sign that read “Hillary 4 Prison” on one side and “Wikileaks Podesta Emails” on the other.

He voted for Donald Trump wearing a Hillary mask and an orange (faux) prison jumpsuit.

“Let me tell you: This is how deep the rot goes."
– Hillary Clinton on Howard Caplan

After the election, he shifted his focus to the “Pizzagate” controversy.

The day after Christmas, he “burst into the Cathedral Basilica of Saints Peter and Paul ... and delivered a screed against the Catholic Church, invoking the debunked Pizzagate conspiracy theory in the process.”

Several days later, he took his Pizzagate signage to Center City angling for camera time during the Mummers Parade.

In July, he claimed to have been “attacked by Antifa” when protests and marches converged in Center City. Also that month, he protested at a Clinton campaign event at the University of Pennsylvania, deeming it #MyBestDayIn5Words.

Thursday seems to be the biggest-profile event in his narrative, though.

“I don’t know if this man yelling wants me to talk about this because he knows it’s a fraud or if he still believes,” is how Clinton couched her response before directing a “you be quiet if you want me to (answer)” command Caplan’s way.

Then, she continued her response:

“Let me tell you: This is how deep the rot goes. You have people on the right who made up this horrible, terrible story that John Podesta and I were running a child sex-trafficking ring in the basement of a pizzeria in Washington, D.C.

“Now you laugh about it, or you moan about it, but a lot of people saw that, and some misguided souls actually believed it because they saw it on the internet or they saw one of these right-wing blowhards promoting it on their panels and their programs.

“So, there were demonstrations. I know people who bring their children to go to this pizzeria which is in a really nice commercial area in Washington, and it’s got ping pong. So, the kids play ping pong and eat pizza.

“There were guys showing up, they were protesting to end the child trafficking ring. But then one misguided young man in North Carolina, he thought he would go be a hero and rescue those children.

“So, he loaded up his AR-15, his automatic weapon, and up he drove from North Carolina to Washington, and he charged into that pizzeria – with his weapon – scaring the heck out of all of the people who work there, and the few customers that were there at the time. And he raged around there, finding out – of course – that the pizzeria had no basement."

Just after Thursday turned to Friday, Caplan returned to Twitter (which had banned several of his accounts in recent months) to retweet reports sent from others at the Clinton event, and like-minded theorists who support his claims.

He also posted live video from Clinton's speech and filmed the aftermath, despite telling security he wasn't filming.

"I'm not in cuffs. It's called exercising your First Amendment right," he said in a Periscope video he posted while walking away from the event while vaping and noting that he got questioned by Secret Service agents. "Oh, I'm fine. I'm totally fine."

"I just gave her the finger," he said as Clinton's motorcade drove past on South Broad Street.

Caplan explained that the fracas started when he yelled "you're not going to bring up Pizzagate" and Clinton said "let him talk" after the audience started shouting him down.

"She heard me loud and clear," said Caplan. "The whole place heard me. ... Right now, I need a drink. F***, I can't believe she didn't talk about Pizzagate (in her prepared remarks). That was my whole thing.

"If I knew she wasn't going to do that, I'd have just brought up (slain Democratic National Committee staffer) Seth Rich. ... She heard me. She addressed me. She was talking about Pizzagate on (my) way out. I really wanted to get it on video."

Well, several other people did.

That he launched a GoFundMe to raise the $230 he needed to cover the ticket (and fees).

That he'd been to similar speeches in Washington (where Clinton mentioned Pizzagate) and New York City (where he wore a Halloween costume and ended up getting interviewed by Secret Service).

That his Periscope app cut out while he was trying to air Thursday's exchange, which came near the end of her speech.

"Honestly, it didn't go off as well as I planned. I was hoping it'd be a little bigger, but at least she knows there are people still out there who haven't forgotten about it," he said.

He admitted to giving Secret Service "a bit of a hard time" after he was escorted from his seat.

"They asked if I had weapons. I said I never fired a gun. Asked about psychological problems. They asked the standard stuff," he said. "Eventually I gave them my information. I wanted to say I was just interviewed by Secret Service in New York last month: Don't you know who I am by now?"