Philly companies vie for investment at Rise of the Rest 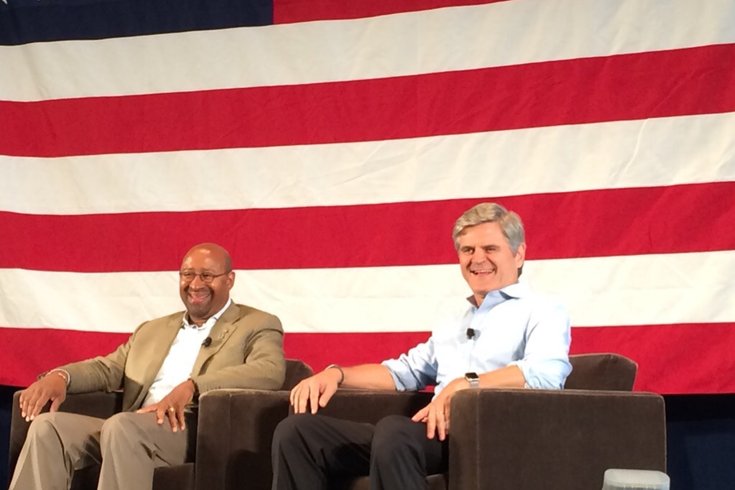 Mayor Michael Nutter and AOL co-founder Steve Case chat during Tuesday's Philly stop of Case's Rise of the Rest Tour. The tour allows small business owners a chance to pitch their ideas for a chance at an investment of $100,000.

Call it "Shark Tank, Philly-style," but on Tuesday, AOL co-founder Steve Case brought his Rise of the Rest Tour - bus and all - to the City of Brotherly Love and offered local entrepreneurs the chance to win an investment of $100,000 for their business.

And, just as in the hit TV show "Shark Tank," the Rise of the Rest Tour's stop here in Philly - held at the National Constitution Center - allowed eight local companies to pitch their visions to a panel of experts in the hopes of getting funding to help their businesses grow.

In the end, Philadelphia-based Scholly, a website that helps connect students with available college scholarships, won the day.

It seemed the pitch, by Scholly co-founder Christopher Gray, won over the panel that included Case, Stephen A. Smith, an ESPN commentator and television personality, Amy Stursberg, executive director of The Blackstone Charitable Foundation, and David Hall, a partner at Revolution Ventures, though Case said that all of the companies that pitched ideas were strong.

"This is really hard. Philadelphia is brilliant," said Case.

"I'm really excited for this," said Gray after being presented with the $100,000 check.

Asked to detail how the funds could help grow the business, Gray said he hopes the money will help him grow the site and allow more students the chance to achieve their dreams of going to college.

"I'm hoping Scholly can help more students in Philadelphia and across the country," he said.

At the opening of the event, Mayor Michael Nutter joined Case on the stage for a short discussion on the importance of entrepreneurship in the city and how government plays a role in helping small businesses grow.

Nutter told the gathered crowd that he believes Philadelphia – unlike other centers of industry like Silicon Valley or, formerly, Detroit – is unique economically as the city is home to strong leaders in diverse industries, including education, health care and technology.

"In Philadelphia, we don't want to be anyone else. We want to do our own thing," said Nutter.

'Case said he saw a lot of potential in the city, even suggesting it could be the next Silicon Valley, "if the community can get together with urgency."

Seemingly inspired by the venue, Case said that he believed young entrepreneurs were like the country's Founding Fathers in that both forged new roads in the hopes of creating a better future.

"Ben Franklin was an entrepreneur, too," said Case. "He knew how to execute his ideas while also starting a country."