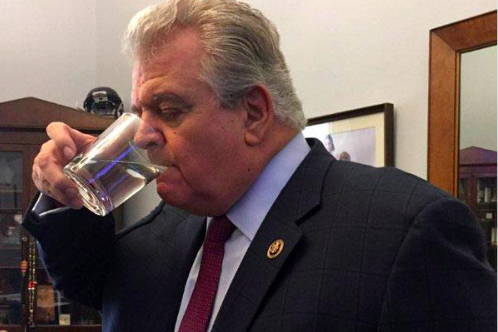 At a concert, it's nice to leave the venue with a drumstick or a guitar pick. At a sporting event, homerun balls and wide receivers' gloves make excellent keepsakes.

When the pope comes to the United States, leave it to a congressman from Philadelphia to make off with the man's holy water.

Pennsylvania Representative Bob Brady was present for Pope Francis' speech before Congress Thursday. According to the Philadelphia Daily News, he was keeping a close eye on the glass of water beside Francis as the pope urged American politicians to reject a "mindset of hostility" on immigration.

When Francis concluded his speech, instead of rushing to shake his hand, Brady dodged the commotion, swooped in and grabbed the blessed glass of water. He then took off for his office and sipped from it before inviting Pennsylvania U.S. Senator and fellow Catholic Bob Casey to do the same.

Guarding the scarce resource, Brady poured the rest of the fluid -- water plus papal backwash -- into a water bottle, with plans to bless his four grandchildren and 1-year-old great-granddaughter.

Brady's Chief of Staff Stan White addressed the incident in an interview with ABC News.

“The congressman is a Catholic and has immense respect for the Holy Father… [Brady] was immensely moved by the speech. He thought the Holy Father spoke to issues he cared deeply about… especially caring about the poor and the Holy Father’s concern for our environment.”

As for the pope's next stop, Brady plans to be in Philadelphia, where if he plays his cards right he might be able to acquire other papal leftovers.