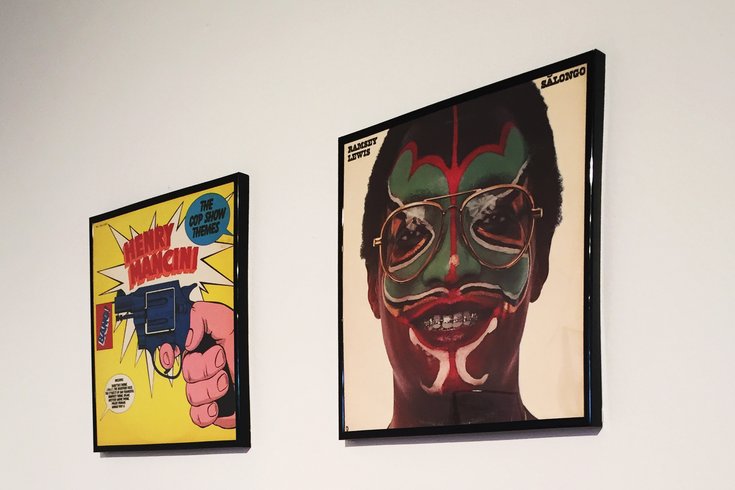 A peek inside the "Dust + Dignity" exhibit at Painted Bridge Art Center.

For Cosmo Baker, a Philly DJ and the director of the just-opened Scratch DJ Academy in Old City, there’s something inherently cold about an MP3.

Hard-drive-bound files are a far cry from the way Baker and his cohorts grew up listening to records: holding the vinyl, inspecting the artwork, claiming ownership. That disconnect is part of the drive behind a new art exhibit called “Dust + Dignity,” running through March at Painted Bride Art Center, a collection of 100 album covers plucked from the personal vinyl collections of a handful of Philadelphia’s most celebrated DJs.

The show, which finds the album covers accompanied by a matching audio tour as well as an additional spoken word component, is a celebration of the artwork itself, but it’s also a purposeful conversation starter about the political vitality of the music. Organized by Sarah Mueller, Angie Asombrosa, and Bruce “Junior” Campbell Jr., “Dust + Dignity” is billed convincingly as an educational experience, an obvious platform for a dialogue about ongoing social justice issues in Philly and across the country. The exhibit helps string together similarly valuable political music from different decades: Kendrick Lamar’s 2015 opus "To Pimp A Butterfly" shares space with powerful works from the 1970s discographies of Gil-Scott Heron and Funkadelic. As artists like Lamar have picked up the reigns in contemporary music, “Dust + Dignity” helps contextualize and maintain the same conversation about systematic racism and injustice.

“I come from a family of super leftist folk, that’s kinda the way I was reared,” says Baker, whose selection of 20 albums for “Dust + Dignity” is joined by picks from his fellow local heavyweights Rich Medina, King Britt, Skeme Richards, and DJ Junior.

“Since I was a young kid, being politically and socially conscious was something [in] my family. I don’t know any other way of thinking,” Baker adds before explaining how his political identity was stoked by the hip-hop of his youth. “Of course it would make sense that when I was discovering music for the first time, that as an angry teenager I would really be wanting to be listening to Public Enemy ‘Fight The Power.’”

While “Dust + Dignity” presents a forceful portrait of music’s potential power for marginalized people, it’s also an intimate look into the passionate fandom of its curators.

“The responsibility to disseminate a very important message throughout music is something that’s never been lost with me." - Cosmo Baker

“It’s all music from my collection,” Baker says. “My mom would play anything from Van Morrison to John Coltrane to Devo. All types of stuff. Sly & The Family Stone to the Rolling Stones.”

“The five DJs that are all taking part in this, we all chose 20 records,” he adds, pointing out that through the selections you can “kind of put in context of who the person [is]. You can kind of see why they selected it and the significance of what they’re trying to say.”

Baker remains hush-hush about his actual curations, but he allows a pair of exceptions: Gil Scott-Heron and Brian Jackson’s politically-charged 1975 release "The First Minute of a New Day" and Funkadelic’s 1979 album "Uncle Jam Wants You." Both album covers play on the same piece of Black Power iconography: an image of the Black Panther co-founder Huey P. Newton sitting in a wicker chair with a shotgun in one hand and a spear in the other. Heron and Jackson’s record replaces Newton with a gorilla on the front and back.

“To me it was almost like this is Gil’s way of taking that very famous and powerful icon and flipping it in his own way,” Baker says, noting that the back of the album portrays a “cartoon silverback gorilla in an army fatigue outfit with a rifle on his back, like a gorilla who is a guerilla.” Funkadelic’s twist is more whimsical by contrast: the band’s mastermind, George Clinton, adopts the same pose but is instead armed with a ray gun and a bop gun. The message is clear: music is a weapon.

“The responsibility to disseminate a very important message throughout music is something that’s never been lost with me,” Baker says. “In a sense I put those two records side-by-side in the exhibit to show two different but very conscious artists of the 1970s, how both these artists took that famous iconic image and kind of flipped it in their own way to tell their story.”

Earlier in our conversation, Cosmo suggests that “Dust + Dignity” offers a similar bit of harmony. “It’s five individual voices, and we’re all kind of saying the same thing but we’re saying it in our own voices,” he says. In that way, the exhibit isn’t so different from the music itself.