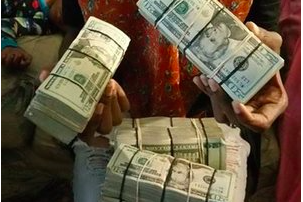 50-year-old electronics repairman Tony Harris posted this photo of his fiance, Amber Crane, before he was fatally shot during a home invasion on Monday, October 12, 2015.

An investigation into a home invasion and fatal shooting Monday night in the Kingsessing neighborhood of West Philadelphia has police questioning whether the attack was motivated by a post the victim made to his Facebook page.

The Philadelphia police department responded to a report of a shooting on the 1100 block of South Ruby Street at 11:12 p.m. Monday night. At the scene, they found 50-year-old Tony Harris suffering from a gunshot wound to the head. He died Tuesday morning at Presbyterian Hospital.

According to investigators, Harris had recently posted a photo on Facebook of his fiancee, Amber Crane, holding several stacks of cash in rubber bands. Harris, an electronics repairman, added the caption: "I misplaced $60,000.00. I hope my wife didn't go shopping with it."

Philadelphia Homicide Captain James Clark said Harris was at home with Crane and their three young children when three black males entered through the unlocked front door, Philadelphia Magazine reports. Crane was taken into the kitchen while Harris was held elsewhere. Both had guns pointed to their heads as the suspects demanded "the money," but within minutes Harris was shot and the three suspects fled.

Clark said Tuesday that police do not believe the suspects escaped with any money. He also corrected initial reports of a gun found on the porch and a vehicle used by the suspects nearby. Detectives are searching the neighborhood and reviewing surveillance footage to locate the three suspects, thought to be between 17-19 years old.

Anyone with information is asked to contact the Homicide Division at 215-686-3334. There is a $20,000 award offered for information leading to an arrest.