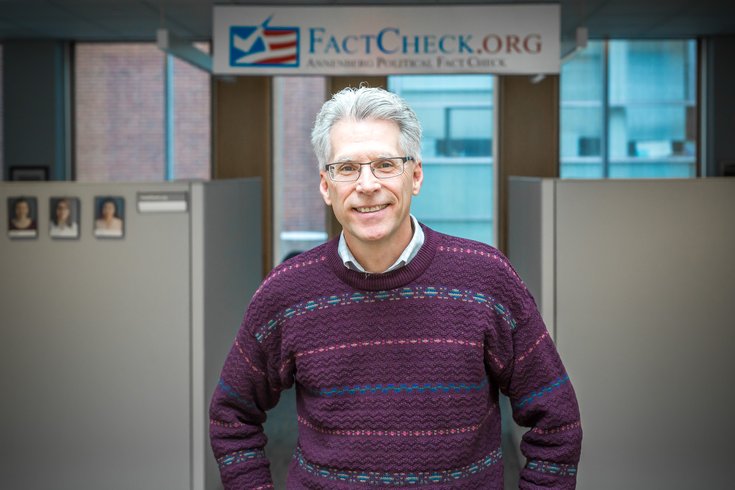 Eugene Kiely, director of FactCheck.org, poses for a photo in its offices at the Annenberg Public Policy Center on the campus of the University of Pennsylvania.

Stories about a koala bear brothel, a federal pension for the mother of Michelle Obama, the imminent retirement of a U.S. Supreme Court justice.

All spread on Facebook. And all fake news, generally for profit or political reasons, or both.

After the presidential election, Facebook founder Mark Zuckerberg on Nov. 12 acknowledged the issue of fake news on the social media site, writing, “Identifying the ‘truth’ is complicated.” Facebook’s founder also expressed a reluctance to become “arbiters of truth ourselves.”

The International Fact-Checking Network, which includes Philly-based FactCheck.org, pinged back with an open letter to Zuckerberg five days later: “We would be glad to engage with you about how your editors could spot and debunk fake claims,” it wrote.

Rather than doing its own fact-checking, Facebook announced on December 15 it was farming out the responsibility of checking out potentially bogus stories by partnering with fact-checking organizations such as FactCheck.org, part of The Annenberg Public Policy Center at the University of Pennsylvania.

So far, Facebook’s plan is to identify and label disputed stories – though not remove them.

Which perhaps explains why the repeatedly debunked Pizzagate tale – about a pedophilia ring operating in a politically-connected pizza shop in Washington, D.C. – remains an active presence on Facebook more than a month after a man with a gun went to the pizzeria to investigate the crackpot story spread on social media, including Facebook. He ended up storming the pizzeria and firing his semi-automatic rifle, though didn't hit anyone.

Asked why Pizzagate stories persist on Facebook, a spokeswoman for the company explained removal of postings isn't part the social media website's strategy.

"We’ve focused our efforts on the worst of the worst, on the clear hoaxes spread by spammers for their own gain, and on engaging both our community and third party organizations. For this initial work, if a story gets marked as fake by third-party fact checkers, it will get flagged as such and get lower distribution in News Feed, but it won’t get taken off the platform."

FactCheck.org is being joined on the Facebook project by Snopes, PolitiFact, ABC News and the Associated Press.

So far, the vetting’s been slow locally. In over a month, FactCheck.org said it has informed Facebook of just four false stories on a long list of flagged topics supplied by the social media site.

And one of those FactCheck.org had vetted previously: the false story that Marian Robinson, Barack Obama’s mother-in-law, is in line for a federal pension for having cared for the president’s daughters.

Three other stories on Facebook’s long list of questionable stories have been discredited by FactCheck.org.

There was a false story that the crew of Air Force One had declined to fly Obama to a golf game.

And last week, it debunked the false tale that Justice Ruth Bader Ginsburg is resigning. But then PolitiFact, another fact-checking partner, already had debunked the same erroneous news.

Asked to comment on the slow pace of vetting by FactCheck.org – and the pace at other organizations – a Facebook spokeswoman deflected: "We don’t have anything further to share at this time since it’s still early days, but we’ll learn and iterate based on our findings." 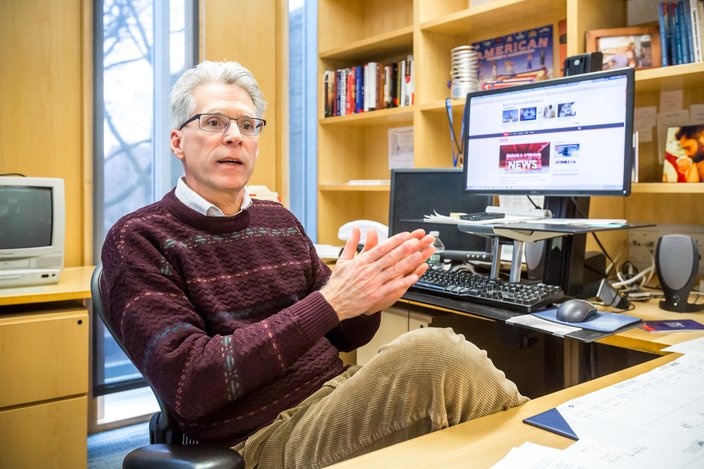 Eugene Kiely explains the process of working on a new fact-checking initiative with Facebook, during a recent interview with PhillyVoice.

'PEOPLE ARE LIVING IN SILOS'

Eugene Kiely, FactCheck.org's director, said the organization is sticking to its core mission of checking out assertions made by politicians.

Which is why his organization passed on a recent Facebook request to vet the koala brothel story, which has been shared on Facebook more than 30,000 times.

“That’s not part of our mission,” Kiely said with a laugh.

According to the “news” account shared repeatedly on Facebook, 20 koalas were saved from an Australian brothel “where clients paid for sexual services with the animals.” Debunking the report, which was first published in 2015, then again on Dec. 30, 2016, was fairly simple and straight ahead: The false story originated in 2015 on a fake news site, which then later republished the exact same story.

Snopes, a more generalized fact-checking site than FactCheck.org, stepped up and knocked down the panda brothel story on January 5.

Kiely concedes the pace is slow so far for his organization.

Winter break meant its five student fact-checkers were off on holiday for weeks, leaving the small organization with a backlog of more than 5,000 emails and hundreds of new emails every day.

FactCheck.org gets no compensation for checking on stories for Facebook, according to Kiely, so the independent non-profit has made no staffing changes. Its truth detectives use the same protocols to check Facebook stories as they do on their other work, Kiely said.

If he had a larger staff, Kiely said expanding to images and memes would be a logical move.

Facebook provides FactCheck.org just with the story topics to review, but no analytical data. "I wish they would," said Kiely.

Kiely said the partnership with Facebook is meant as a pilot program, but he doesn't see the proliferation of fake news slowing down – or the general public getting better at picking out the bogus stories on Facebook.

"People are living in silos, they are listening in echo chambers," believing and spreading fake news that fits with their viewpoints, not with what is true, said Kiely.