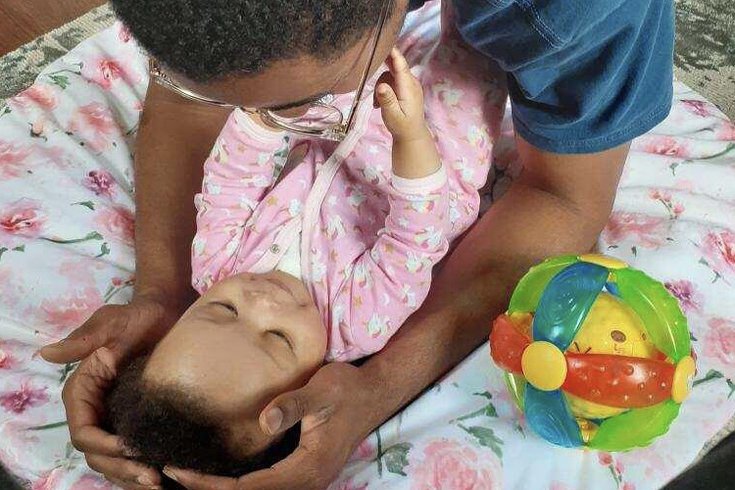 Marquise Dogan, 23, says DadLab, a support group for new fathers, has boosted his confidence as a parent. 'It's just encouraging and comforting,' he says. Above, he plays with his daughter, Mylan.

Marquise Dogan wasn't sure what to expect before his first child arrived last September. But he knew he wanted to be as prepared for fatherhood as possible.

In the weeks before his daughter, Mylan, was born, Dogan called the city in search of resources for new parents. He was directed to a website where he discovered DadLab, a support group that aims to help new fathers thrive as they make one of the biggest transitions of their lives.

The group, offered by the Einstein Healthcare Network, has proved invaluable to Dogan. Each Thursday, new dads gather virtually to discuss everything from how to soothe a baby who won't stop crying to how to effectively communicate with a co-parent.

"We're all there to help each other, to lift up each other and help guide each other through this new life as a parent," said Dogan, 23, of Philadelphia. "It's definitely a diverse group and we're there with one purpose, and it's to be better parents."

DadLab was founded several years ago by Jay Cherney, a psychologist who has spent decades running a clinical practice that focuses on family relationships. He initially ran DadLab at Abington Hospital before moving to Einstein about two years ago. He sought to create a safe space for new fathers to discuss their fears about parenthood and the challenges they face.

"The transition to fatherhood is really another level of adulthood. It's a level of maturity," Cherney said. "There's a lot of things that dads learn about themselves, learning patience. I think the big, core difference between being an adult and being a dad – it's no longer just about you. The priority becomes this baby. That's a huge shift in identity, actually."

Though numerous resources exist for new mothers, there aren't nearly as many for fathers. Yet, research points to vast benefits that stem from a steady fatherly presence, Cherney said. Fathers play a big role in aiding their children's social and language development, spurring academic success and reducing the likelihood of addiction.

DadLab is open to fathers-to-be, new fathers and their partners, up until their child turns 2. Father figures also are welcome. It's free to anyone who meet those criteria – even if they do not receive health services at Einstein. And parents are encouraged to bring their babies.

Prior to the COVID-19 pandemic, DadLab met in person at Einstein Medical Center in North Philly. Cherney hopes to resume some type of in-person presence in the future, but the group continues to meet via Zoom.

Each week, Cherney and co-facilitator Clarence Iszard introduce a topic for discussion. It may involve child development, the importance of self care or the physical and emotional demands of parenthood, among others. For the next hour, they let the parents share their experiences.

"It's called DadLab because I see parenting as a life-long series of experiments," Cherney said. "You try different things. There's many really good ways to be a parent, many styles, many approaches. In the group, people tell their stories of what they're doing, how they're trying to learn how to be a parent. Through hearing other people who are going through similar challenges – and joys – people sort of home in on what works best for them as a parent. It's really a peer learning community."

Many of the new fathers who have benefitted from the program weren't expecting to become parents so soon, Iszard said. Pregnancies were unplanned and they didn't feel prepared. Many also do not live with their child's mother and must learn to co-parent.

The DadLab facilitators emphasize that new parents have the opportunity to pass down generational wealth – the knowledge they've gained, their family history and the things their child did as a toddler. It gives the children roots and a sense of connectedness, Iszard said. 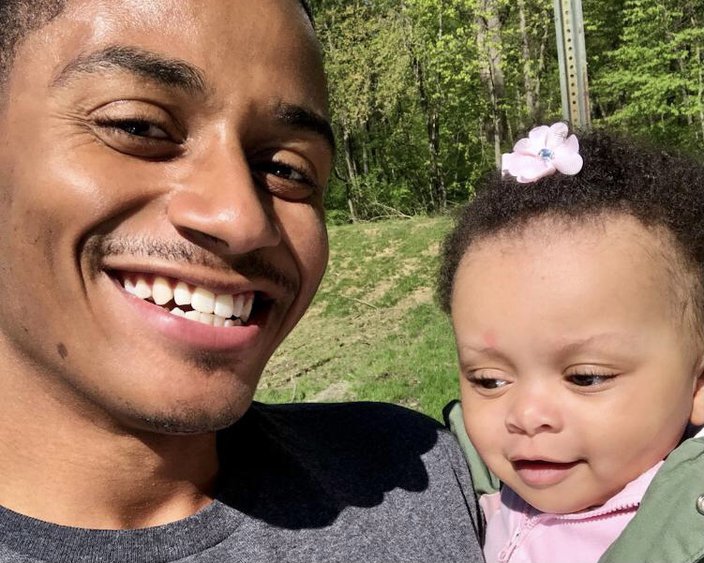 Marquise Dogan began attending DadLab in the weeks before his daughter, Mylan, was born in September 2020. He has found the support group a safe space to discuss the challenging of parenting.

"See some of our dads with their children – if you just look at their face and the child's face, you can see there's a connectedness that's going on," said Iszard, a health educator who has spent 20 years at Einstein. "I'm not saying that connectedness wouldn't happen without us, but we like to believe that we help play a part with that."

For Dogan, DadLab has offered a place where he feels comfortable opening up about his role as a new father. He attends almost every meeting, as does Mylan's mother. The encouragement and advice he has received have fueled Dogan's confidence as a parent, he said.

It's been about 10 months since Dogan first began found DadLab. In that time, he's watched Mylan grow into a 9-month-old who is itching to crawl and trying to form words.

"I actually recorded a video – she said 'Daddy' as I recorded it," Dogan said. "Just before Father's Day. That was a blessing."