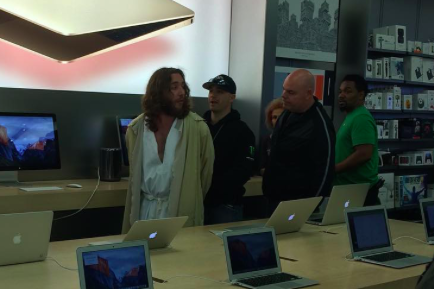 UPDATE: Around 7:30 a.m. Tuesday, Michael Grant, aka Philly Jesus, tweeted that he was "free at last." He has been charged with Trespassing and Disorderly Conduct for Engaging in Fighting and is scheduled to appear in court on May 17.

The omnipresent street preacher, a recovering heroin addict who spends most of his time at LOVE Park, was photographed by local writer Jen Miller as police placed him under arrest at the Walnut Street outlet. The photo later popped up on Instagram.

It's still not clear what led to the incident. According to PhillyMag's Dan McQuade, several bystanders said Grant refused to leave the premises when Apple employees told him he had to go.

Just saw Philly Jesus get arrested in the Apple Store shouting "I know my rights. Freedom of religion!" #accurate

It's possible that Grant's cane was flagged as a potential danger to customers. When he failed to depart, Grant was handcuffed and driven away in a police van.

Grant was previously arrested for disorderly conduct at LOVE Park in November 2014. He took exception to that and clarified that he is not a solicitor.

Charges in the 2014 incident were eventually dropped and Grant, a controversial a voice on social media, later launched a $70 million GoFundMe campaign to start a new global ministry.