The Philly neighborhood where household income has crumbled

Haddington has seen one of the worst declines in Philadelphia since 2000. One nonprofit is trying to bring them back. 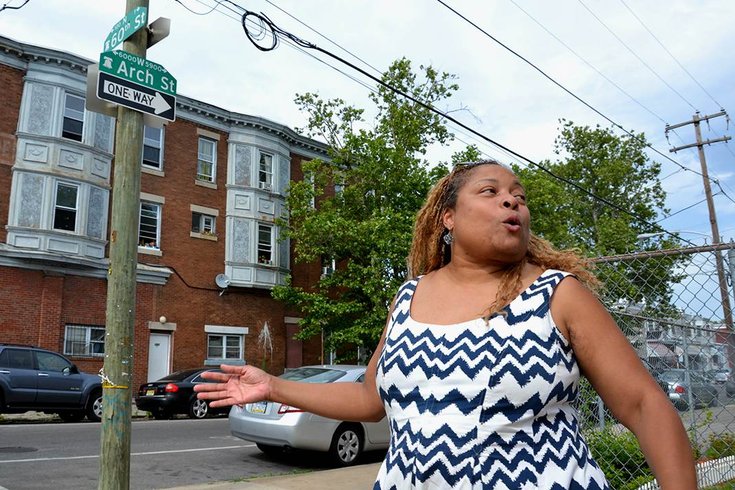 “This city has deep pockets of poverty and need, and we’re not interested in competing with them,” says Wanda Mial, executive director of ACHIEVEability. “What I need to say is, there are no resources here, and we need to figure out why.”

ACHIEVEability has been carrying a mission for 35 years strong now, “working every day to break the generational cycle of poverty.”

With that much time under its belt, the multi-service nonprofit can confidently attest to long-term changes in Haddington and Cobb’s Creek, the two West Philadelphia neighborhoods it serves. But according to ACHIEVEability’s executive director, Wanda Mial, the 21st century hasn’t brought many blessings to this area near 60th Street under the Market-Frankford El.

Last month, the Pew Charitable Trust released a detailed study of gentrification in Philadelphia. Unlike other studies, Pew gave a definition to the slippery term — they measured it through median household income. Between 2000 and 2014, the study found that a paltry four percent of the city’s 372 census tracts experienced “gentrification,” meaning their population went from relatively poor to above-average in wealth. The gut-punch takeaway from Pew’s report wasn’t about tapas bars, crossfit studios and $400,000 townhomes being built in formerly low-income neighborhoods. It was that, despite all the drama lavished upon gentrifying neighborhoods, 44 percent of the census tracts hemorrhaged income over the last two decades.

One of the census tracts in ACHIEVEability’s coverage area, which spans from 54th to 58th streets and from Vine Street to Girard Avenue, shed 55 percent of its household income in the period of Pew’s study — the second worst decline citywide. In this tract in 2000, the average household brought in $29,300 (adjusted for inflation), which even then was the city’s average. By 2014, it fell to a deeply poor $13,183.

Incomes in an adjacent Haddington tract dropped by 45 percent, and 44 percent in the one-square-mile neighborhood of Mill Creek right next door.

The case of crippled incomes in Philadelphia is familiar by now. Between 2000 and the 2010, the city’s poverty rate jumped from 23 to 27 percent. The decline has hit African-American and Latino populations the hardest. Other similarly desperate corners of the city — from Strawberry Mansion to Fairhill — slid further into poverty throughout the course of Pew’s study.

But Haddington is unique in that it saw such a concentrated, steep decline. Three of the 10 census tracts that lost the most income since 2000 share borders in this part of West Philly.

These three census tracts were among the 10 worst in the period of Pew’s study. (2000 figures are adjusted for inflation.)

The 21st century hasn’t brought many blessings to the area near 60th Street under the Market-Frankford El, says the leader of an organization – ACHIEVEability – trying to change that.

SO WHAT HAPPENED TO HADDINGTON?

Residents partially attribute the wage loss to the grueling, decade-long renovation of the Market-Frankford El. Scads of businesses closed up shop during SEPTA’s renovations between 1999 and 2009, a time period which, Mial pointed out, coincides with the area’s income loss. Residents and business owners also bemoaned the surge in violent crime that continues to plague the 60th Street commercial corridor.

“The challenge is, how does this neighborhood get prioritized in a city with lots of deserving neighborhoods and families?” – Wanda Mial, executive director of ACHIEVEability

Meanwhile, census data for these two sections of Haddington show that single-parent households have become slightly more common since 2000. Today, nearly 60 percent of neighborhood’s households are headed by single women. (“We have single fathers, too,” Mial added of ACHIEVEability’s clients.) Educational attainment in the area is among the worst in the city, according to the school district’s yearly progress reports. Last year, the three high schools in ACHIEVEability’s catchment area (West Philadelphia, Overbrook, and William L. Sayre) ranked in the bottom quartile of city schools, and among the 10 worst in terms of college and career readiness.

While renewed private and public investment has cropped up to the east and west, Mial said Haddington hasn’t gotten its due.

“This city has deep pockets of poverty and need, and we’re not interested in competing with them,” Mial said. “What I need to say is, there are no resources here, and we need to figure out why.”

ACHIEVEability is the oldest and largest nonprofit in the area. But its $2.4 million annual operating budget, funded by the U.S. Department of Housing and Urban Development, is stretched thin.

MOVING THE NEEDLE, ONE DEGREE AT A TIME

Despite all of its bleak statistics, Haddington still has a famously high homeownership rate. The problem is that, with economic conditions as they are, the resident population lacks stability, Mial said.

Mial and her team work with 120 to 150 single-parent, homeless, or families at risk of becoming homeless each year, providing “360-degree support.”

The first steps are employment and education. ACHIEVEability provides financial and social support to get single parents into 2- or 4-year degree programs, which they complete while they hold down part-time jobs. Secondly, the nonprofit helps support them through housing, childcare, and other services.

“It’s not magic. Obviously it’s a homelessness-based program. But the truth is, this model is a basic high-quality social work model. You work with the whole family to achieve. You work with the parents, and the kids go with them,” Mial said.

Last year, 19 parents completed college-level degrees. Every single one of high-school seniors among the families in the ACHIEVEability program graduated, and two-thirds of them enrolled immediately in college.

Among those degree earners, the organization has monitored a 77 percent increase in average hourly wages.

But as always, need outweighs resources. Few organizations, both for-profit and nonprofit, are investing in lifting Haddington out of poverty. In the local NGO world, Mial said a lot of emphasis is put on “the Promise Zone,” one of the five improvement regions selected by President Obama across the country. The zone’s boundary stops just east of Haddington.

“The challenge is, how does this neighborhood get prioritized in a city with lots of deserving neighborhoods and families?” Mial said. “If I were just speaking as a citizen, I’d say I’m glad there are other people making that decision. As the director of ACHIEVEability in a neighborhood that has been underserved and has very limited public dollar support, I would say, look, I know it’s hard decisions, but this neighborhood...it’s its turn.”