Philly parks remain open, but closures are 'not off the table,' Mayor Kenney says 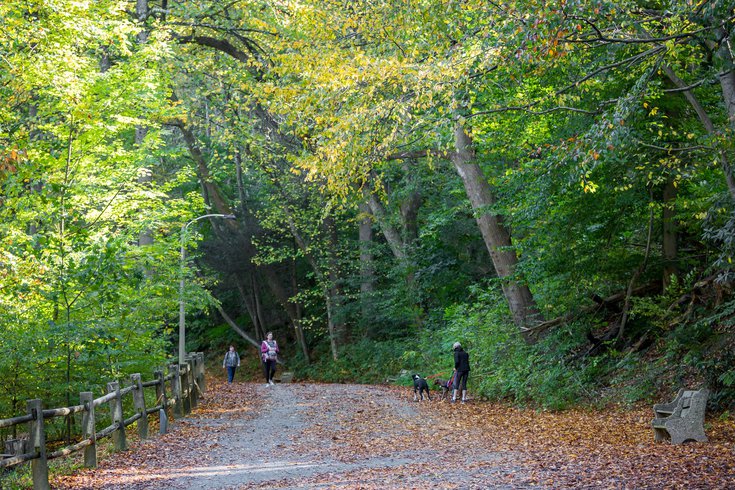 Philadelphia Mayor Jim Kenney has allowed the city's park system to remain open during the coronavirus pandemic. But he that could change if people do not adhere to social distancing guidelines. Above, Wissahickon Valley Park in 2018.

In the best times, Wissahickon Valley Park offers Philadelphia area residents a peaceful respite to the busier – and noisier – aspects of city life.

So it comes as no surprise that tens of thousands of people have flocked there during the coronavirus pandemic, whether to escape the confines of their homes, exercise along Forbidden Drive or socialize with their friends.

The potential public health effects of this surge concerns Ruffian Tittmann, executive director of Friends of the Wissahickon, the nonprofit the cares for the park. For now, Mayor Jim Kenney is keeping city parks open. But that could change if group gatherings persist.

"We've attempted to give people, with the appropriate precautions, the ability to exercise and get some time out of their imprisonment," Kenney said. "But that's not off the table. If it continues and we start seeing numbers that are more concerning than they are already, that's certainly an option for us to do."

Philadelphia's stay-at-home order restricts gatherings of any size outside the household. Residents are permitted to exercise so long as they adhere to social distancing guidelines.

While most park-goers are politely attempting to keep their distance, the volume witnessed at Wissahickon Valley Park in March was "pretty astounding," Tittmann said. She's particularly concerned by group gatherings, which go against social distancing recommendations.

"This isn't business as usual," Tittmann said. "It's not the time for meeting up with the running club and having a huge long adventure. We're all in it together."

A permanent counter installed along a bike path by the Delaware River Valley Planning Commission showed a 30% increase from last March, Tittmann said. And that was with a temporary bridge closure.

Tittmann declined to say whether she believed the Wissahickon should be closed, saying that decision is best left to Kenney and the Parks and Recreation Department, which oversees it. But she acknowledged a closure would be difficult to enforce, given the varying ways people can enter the forested park.

Tittmann encouraged people to enjoy the park at off peak hours – weekday mornings are generally less busy. She advised people to stay home if they've been there several days in a row. Instead, she recommended taking a walk around the neighborhood that day.

"Every day we're seeing new guidance from local, state, federal and even the global health agencies on how to keep ourselves safe," Tittmann said. "Of course, the biggest one is to stay home. That's hard because people are home. They're getting a little stir-crazy and they love to be outside. And the Wissahickon is – I personally feel – the crown jewel of Philadelphia and its park system."

The Parks and Recreation Department is enhancing efforts to stress social distancing, spokesperson Maita Soukup said. Staffers have posted more than 6,000 signs throughout the system since March 19 and launched an information campaign on social media. When necessary, police are dispersing crowds.

Though public health remains her main concern, Tittmann also worries about the impact the influx of visitors is having on the Wissahickon. Typically, volunteer crews are available to pick up trash, clear trails and remove invasive plants. But the COVID-19 crisis has forced them to remain home.

For now, the parks department is carrying that burden.

"We are seeing increased usage across the park system, and the Wissahickon has been no exception," Soukup wrote in an email. "Our operations crews are doing regular trash collection. Rangers are onsite to monitor trails, encourage safe social distancing, and issue parking tickets as necessary. The Philadelphia Police Department is also helping to enforce social distancing on their patrols."